The annual Purbeck Runners Awards Night and Christmas Dinner brings the racing year for the club to a glittering conclusion. It is a year that started on a cold January morning for the local Swanage 10k road race, a counter in the Purbeck Runners Club Championship, which sees a big turnout from the club’s runners eager to put down an early marker for the season ahead. From here the season saw the club competing in the Dorset Road Race League, the Purbeck Trail Series, its own Club Championship and its Equalizer Series. In addition, Purbeck Runners represented the club in races across the country and even overseas, with action on road, trail, cross country and fell, with everything from furious Parkrun dashes to big city marathons and an epic 100 mile ultra. Ultimately the season came to a thrilling finish for both the Dorset Road Race League and the Club Championship at the Boscombe 10k. So, as the dust and mud settled and the points were counted, it was time for the Purbeck Runners to swap the trainers, club vests and high vis jackets and “dress to impress” for the annual awards and dinner at the Grand Hotel in Swanage!

The awards were brilliantly hosted by the Purbeck Runners Chair and Coach, Paula Lawton-Archer who invited everyone to “celebrate another year for this fantastic club.” Where better to start than to congratulate the whole Womens Team for becoming Dorset Road Race League Division 2 Champions and winning promotion to Division 1! It was a fantastic achievement and came after a hard-fought series with a very tense finish (which you can read about in a news item on the Purbeck Runners website). Thirteen members contributed to the women’s team victory - (in alphabetical order) Tish Alberry, Tracy Byrom, Zodwa Chasokela, Tracey Colquhoun, Lily Cooper, Liz Goldsack, Lorna Haines, Charlotte Halford, Paula Lawton-Archer, Clare Martin, Barbara Murray, Zoe Pattison and Beccy Spicer. Lorna Haines won the women’s individual club award and Zodwa Chasokela received the Fidelity Award for completing all 12 races, which she has now done for an amazing 9th year running!

Paula paused from the awards to reflect on the diversity of races across the country at which Purbeck Runners represented the club. She then went on to offer special thanks to two members whose support had been crucial to the club. Firstly, she made a presentation to Trudy Allen for her critical work as minute taker at all the committee meetings. She then thanked Matthew Coggins, who was stepping down as membership secretary after several years, having successfully steered the club through a challenging modernisation process to digital registrations. 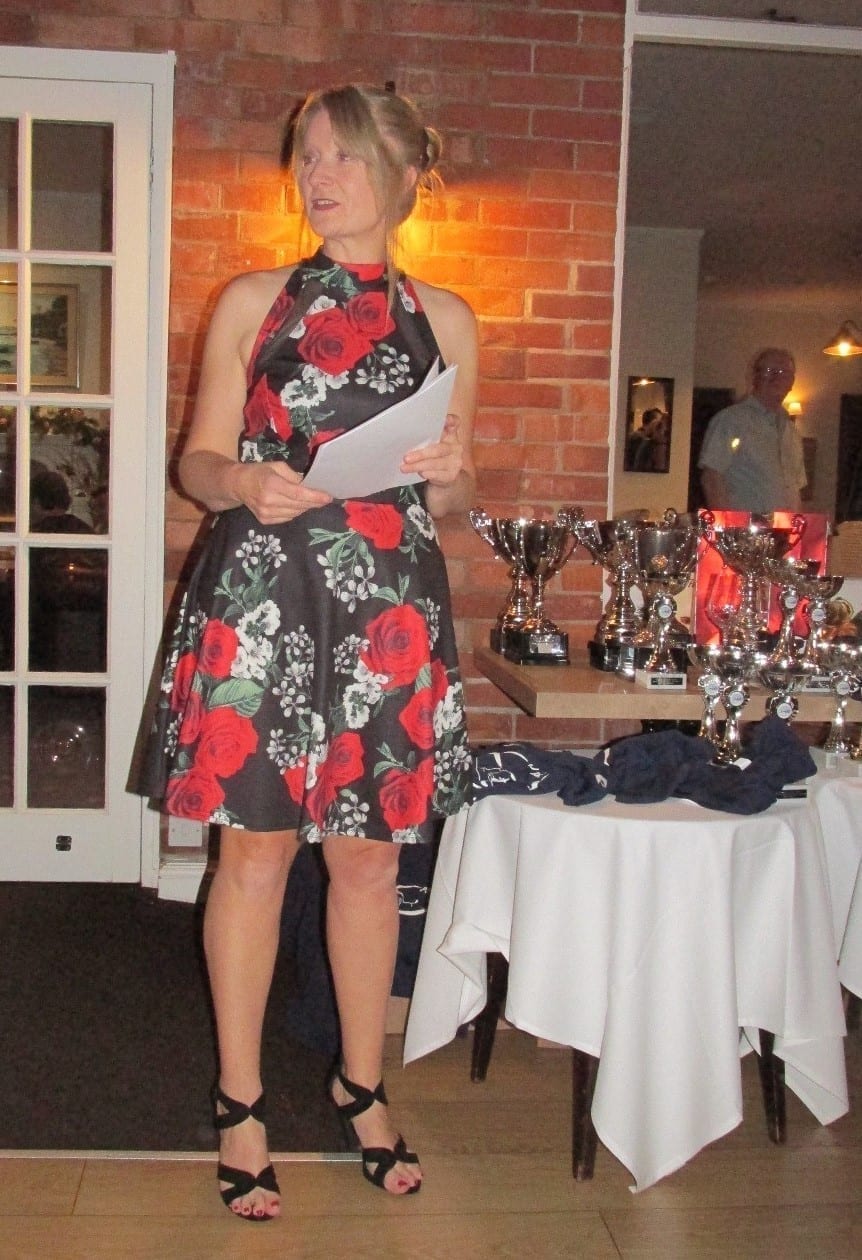 It was now time for the eagerly awaited Club Championship Awards. The championship was fought out over 13 races - 7 from the DRRL, 1 other road race, 1 multi-terrain and three trail races from the Purbeck Trail Series, plus best marathon time and best Parkrun time, with the best 8 results counting. The format presents a real challenge to the runners with the variety of terrain and distances, including some very fast courses, plenty of hills both on and off road, the infamous steps of the Beast and the strength sapping soft sand of the Studland Stampede. 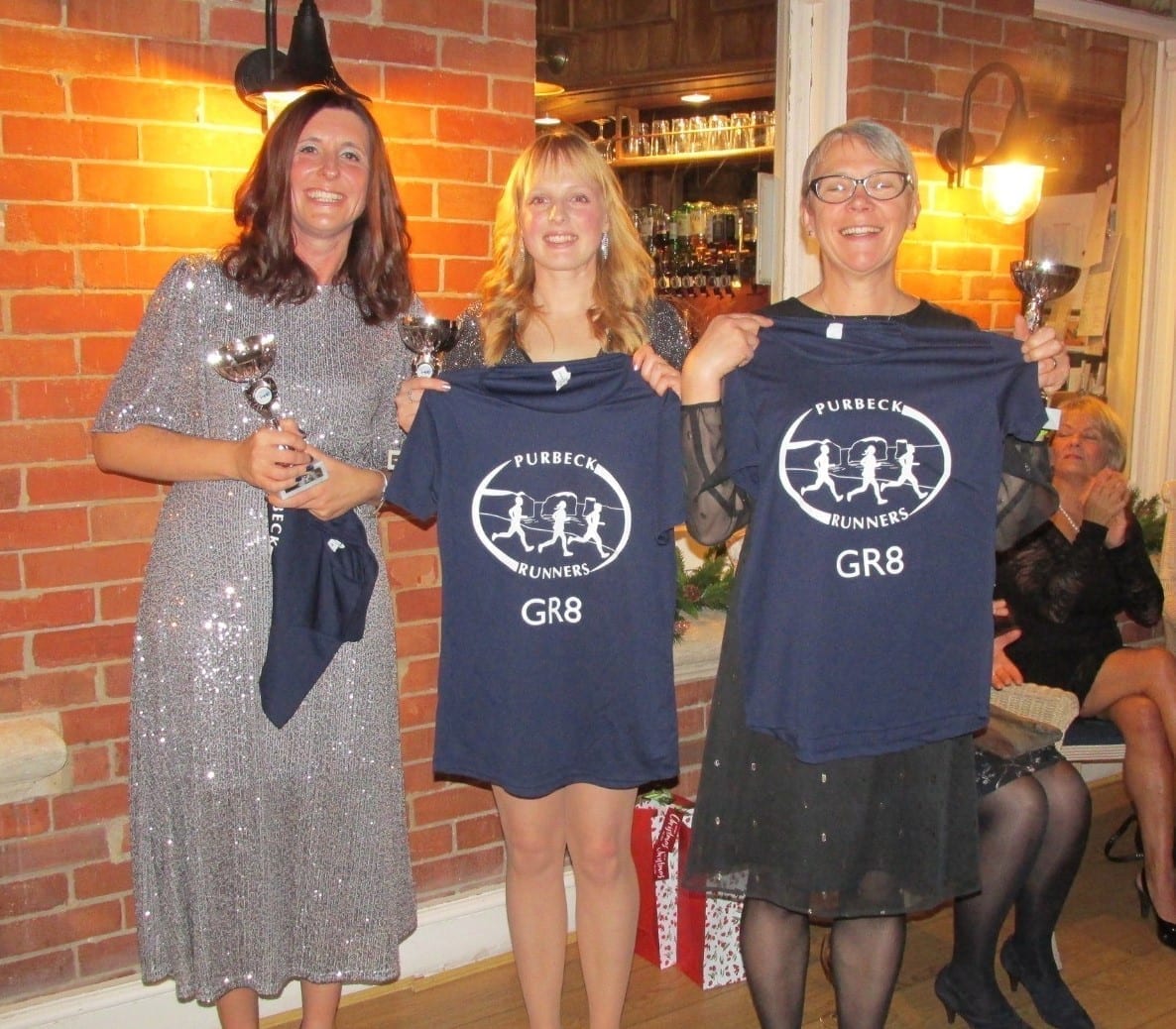 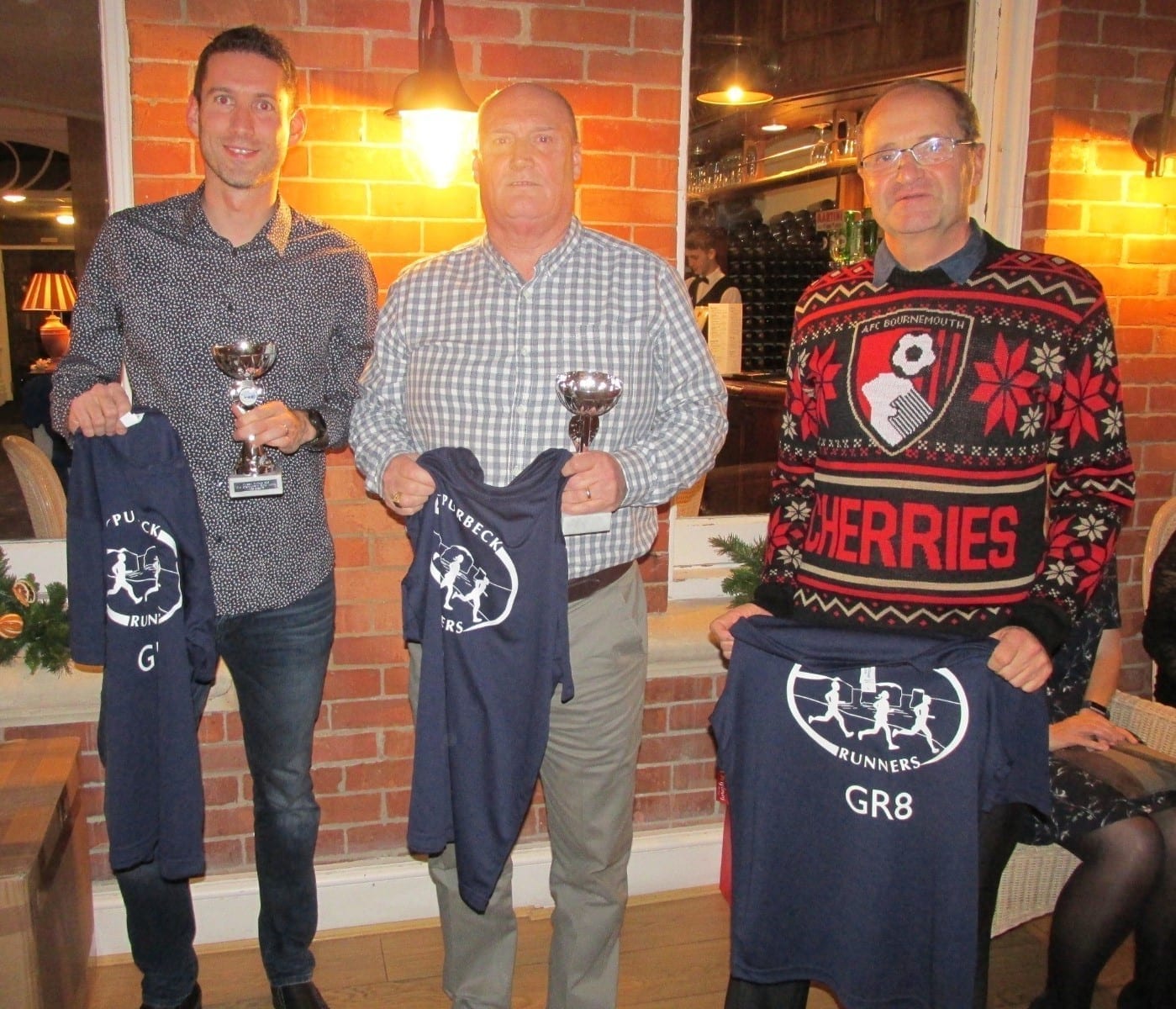 There was a special award for Tish Alberry and Sarah Colquhoun who both completed all 13 of the events in the Championship which was a remarkable achievement! 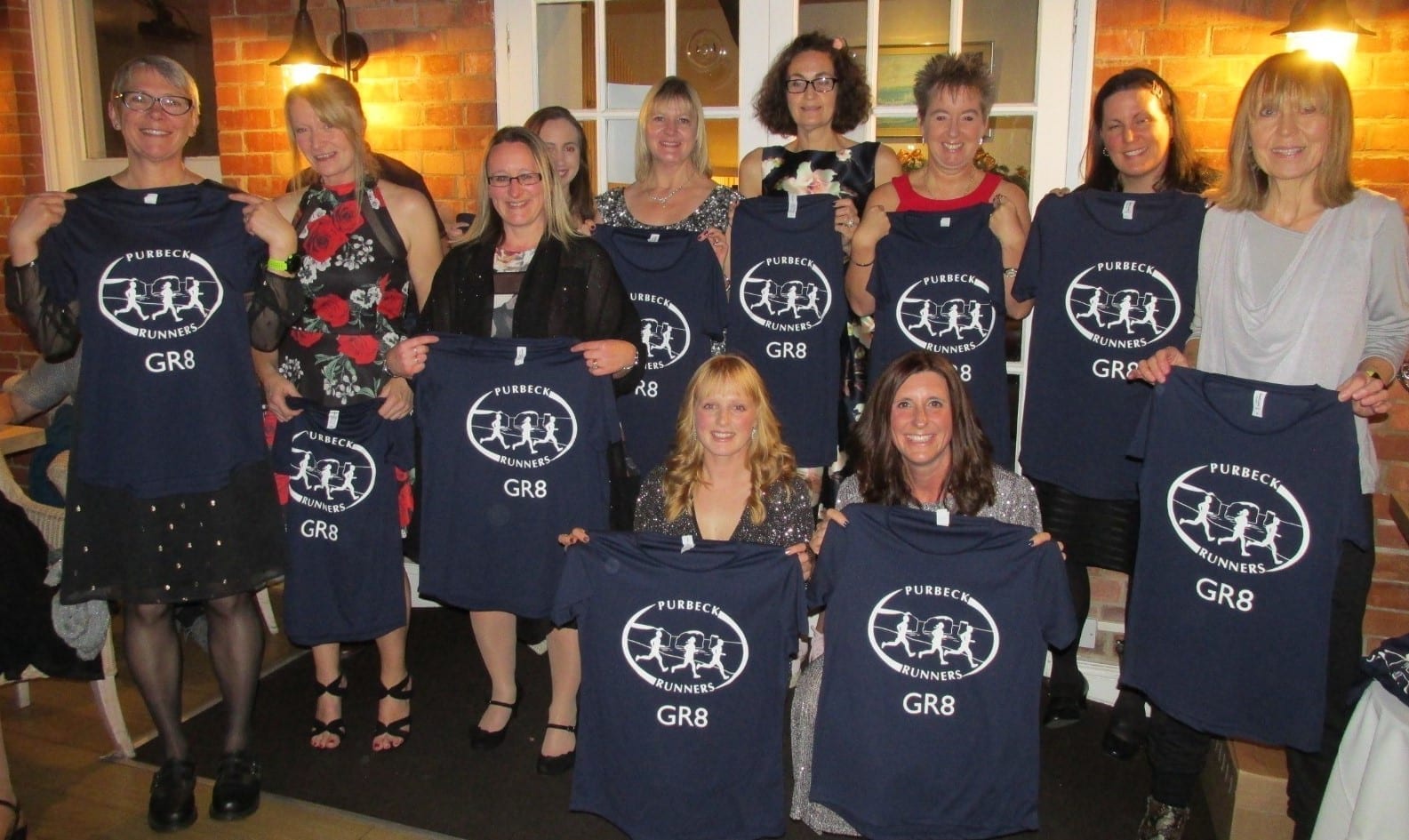 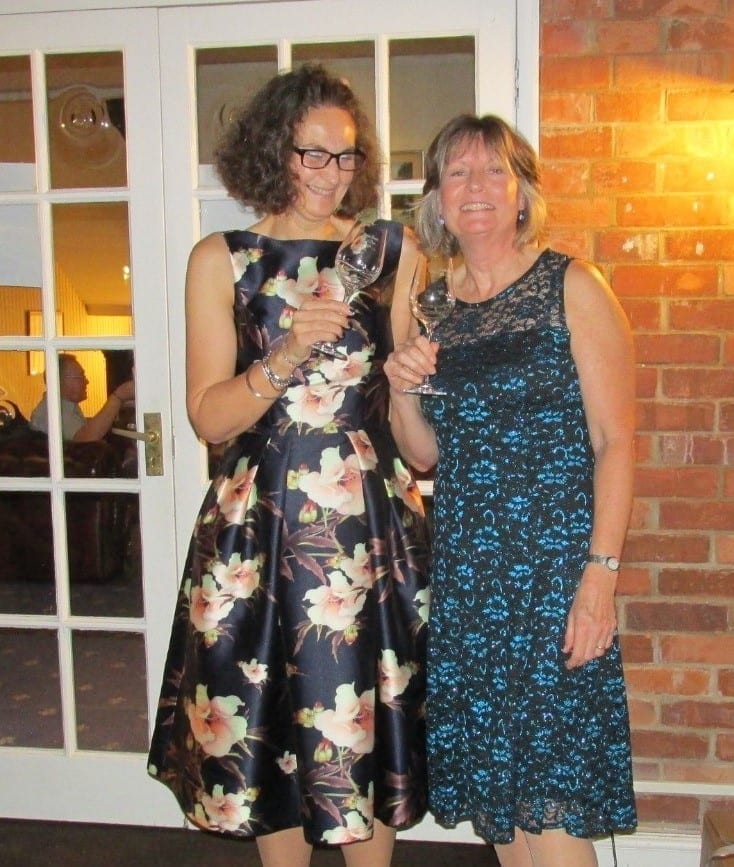 And now to the overall winners. In the women’s championship Tish Alberry’s commitment and hard running throughout the season gave her third place. In second place, by just one point was the 2015 winner Charlotte Halford. The 2019 Purbeck Runners women’s champion was previous three-time winner Lorna Haines, making a fantastic come back since her last title in 2013! It was clear that this was very special to Lorna. 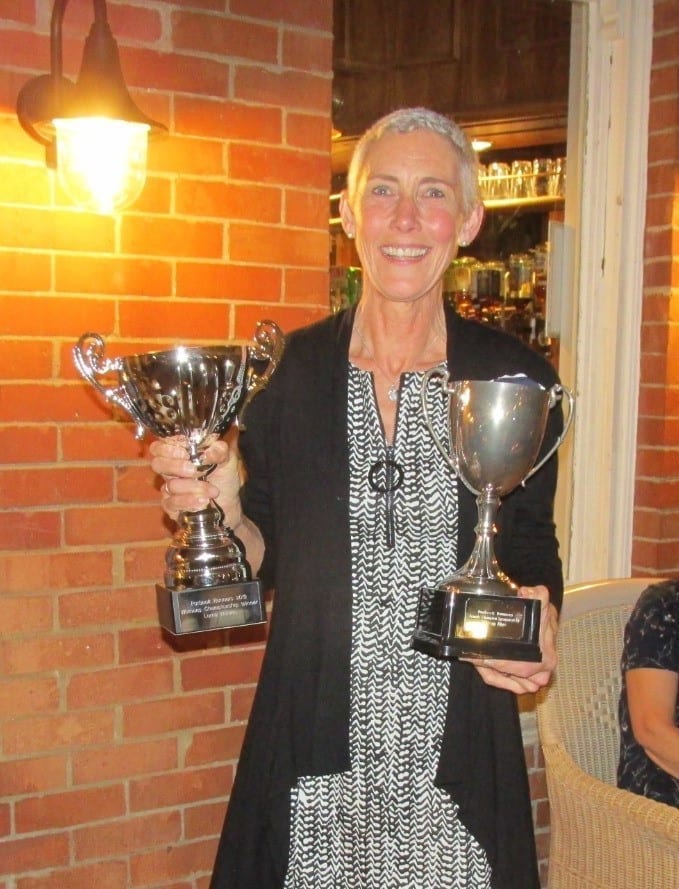 The men’s championship was also very hard fought and third place went to two times winner and a further 8 times in the top three, Hamish Murray. The second-place award winner for the second year running and beating his father by 4 points, was Rob Murray. The 2019 Purbeck Runners men’s champion, after a very impressive season, was 2016 winner Stephen Bridger! Stephen capped a great year by also winning the Dorset Road Race League men’s individual club award for the Purbeck Runners.

There was still one more championship in this busy year for the Purbeck Runners in the form of the mixed handicap series known as The Equalizer. Run over 7 races, with 5 at the Upton Parkrun and 2 over a hilly trail course at Durlston Country Park, it sets runners off at time intervals depending on their previous results. This makes for some interesting and exciting races. The 2019 Purbeck Runners Equalizer champion was Emma Risk!

The final award of the night was for the Purbeck Runner of the year, which is a chance for the members to nominate and vote for the person they think has made a significant contribution to the club. This year there were five nominees – Tara McLintic, Tish Alberry, Matthew Coggins, Lizzy Yates and Guy Hammersley. Paula started to describe the great commitment that the winner had made to the club over the years with the Purbeck Trail Series, DRRL and Club Championship, but admitted that she could no longer be cryptic as he had also fulfilled the vital role as Membership Secretary and been the Race Director for the enormously successful Purbeck 10k. This amounted to an outstanding contribution to the club and always with a smile. The 2019 Purbeck Runner of the year was of course Matt Coggins!

Before closing the awards ceremony, there was one final announcement for the coveted London Marathon 2020 place which went to Sarah Colquhoun! This fittingly brought the ceremony to a close looking forward to next year’s racing. 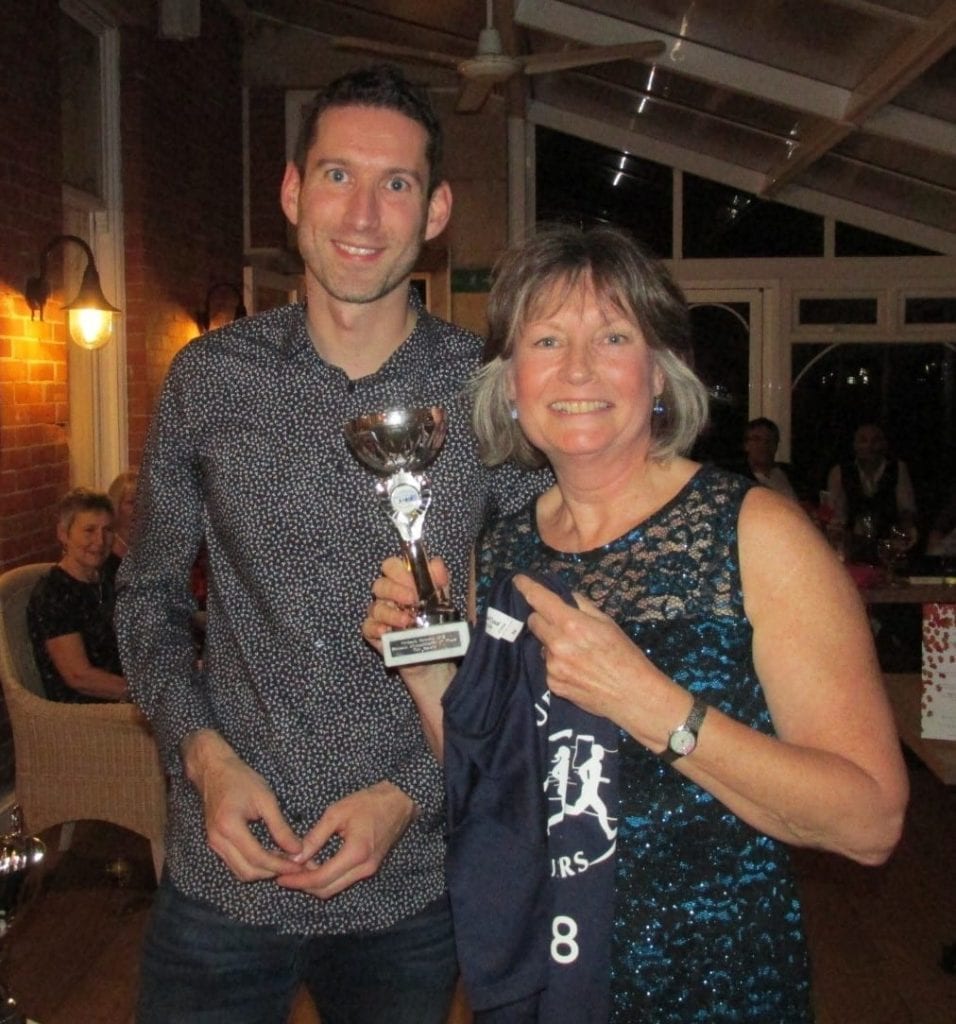 Matt Coggins, Purbeck Runner of the Year with Tish Alberry

The members enjoyed a great evening of festive dining, dancing and banter. The running year still has some legs in it though, so despite the partying some hardy runners were out on the Dorset Coast Path the following morning with quite a few GR8 Tee Shirts in evidence! You will see plenty of Purbeck Runners out and about in the run up to Christmas, but there may be the odd set of antlers on display.

The Morning After Run

Unfortunately, some of the award winners were unable to attend the ceremony so apologies that we do not have photographs of all our winners.