It’s the first of July, it’s a Wednesday evening, just before 7pm and two cars pull up at almost the same time in the car park in Days Park. The drivers emerge in running kit; there is an enthusiastic exchange: “Good to see you…it’s been a long time…it’s great to be back!” They both run onto the playing field where two other runners are already warming up and shortly another jogs onto the pitch. It is an ordinary enough event, but there is a real sense of excitement. At the same time on the other side of Days Park a small group of runners are also arriving and the scene is repeated over on King George’s playing fields and up at Durlston. Each time there is the same buzz, the same anticipation and the same excited chatter with people pleased to be meeting up, albeit at a safe distance and preparing to do something together that has not been possible for three months. It is the first return to activity for the Purbeck Runners and follows the Government’s relaxing of lockdown, the issuing of guidance from England Athletics and two weeks of eager preparation by the club’s committee and run leaders. The groups, which were limited to a total of six, were led by Paula Lawton-Archer, Ross Wayne, Abigail Baker and Jayne Hodson who quickly stepped in when the first three groups filled up almost immediately. Each leader offered a different session, but all were based on training to improve pace, develop strength and stamina and work on running technique. We experienced drills; drills are tough they must be doing good! There were speed intervals; they hurt and hill reps; I’m OK with hills. All agreed it had been a great evening, the leaders had done an amazing job and the COVID-19 procedures had worked well.

The training sessions were repeated for the next two weeks, with leaders changing venues and offering many different routines. There were more technical drills, short fast intervals, 5 X 1km intervals, punishing hill reps up Nine Barrow Down and the famous Kenyan Hill Session. The run leaders said how great it was to see members who did not normally do technical training sessions getting stuck in and saying how much they had enjoyed it. As well as the fun of the training the sessions were also a much needed social event with an opportunity for a good catch.

Below are some scenes from the training sessions. 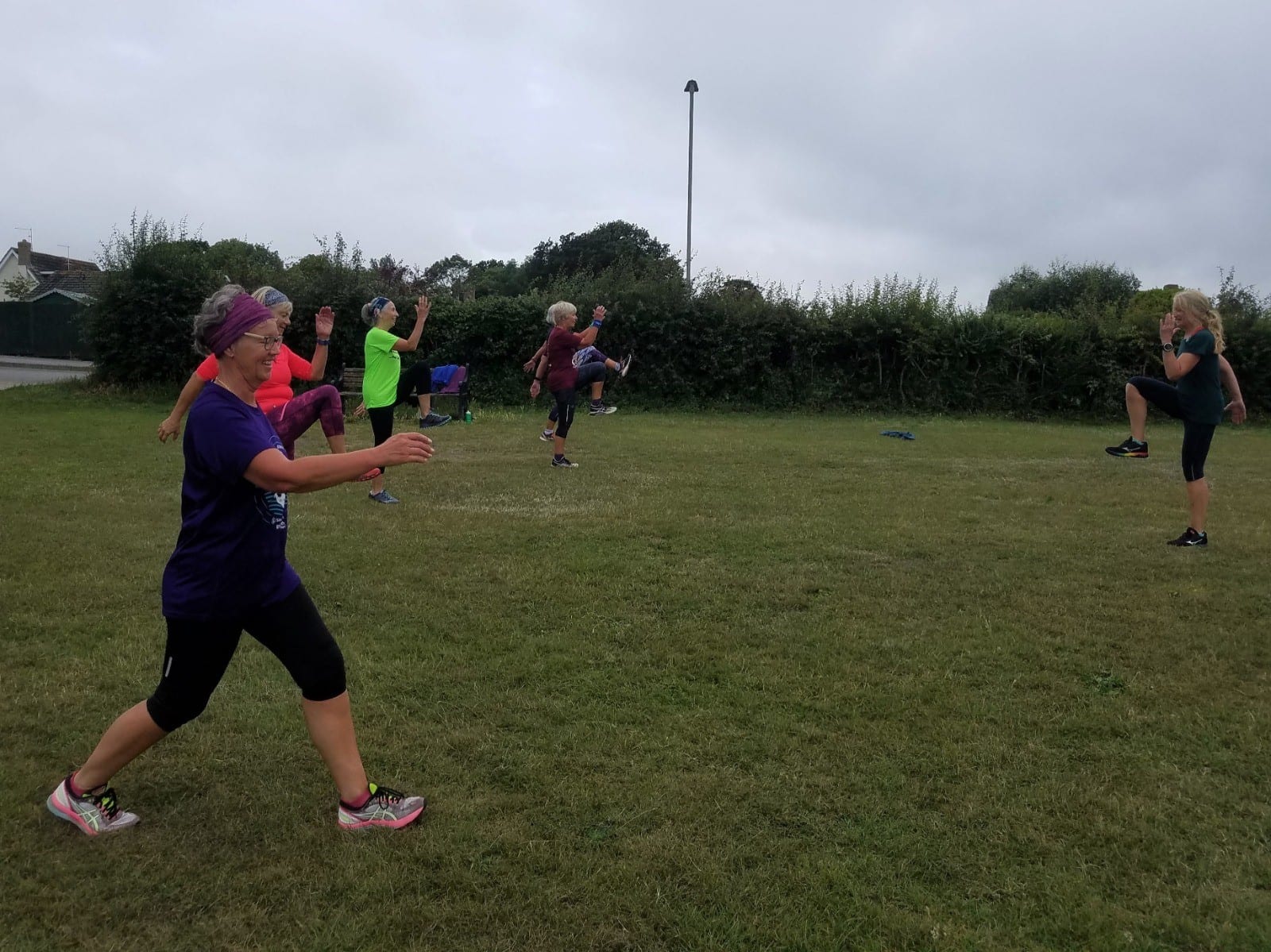 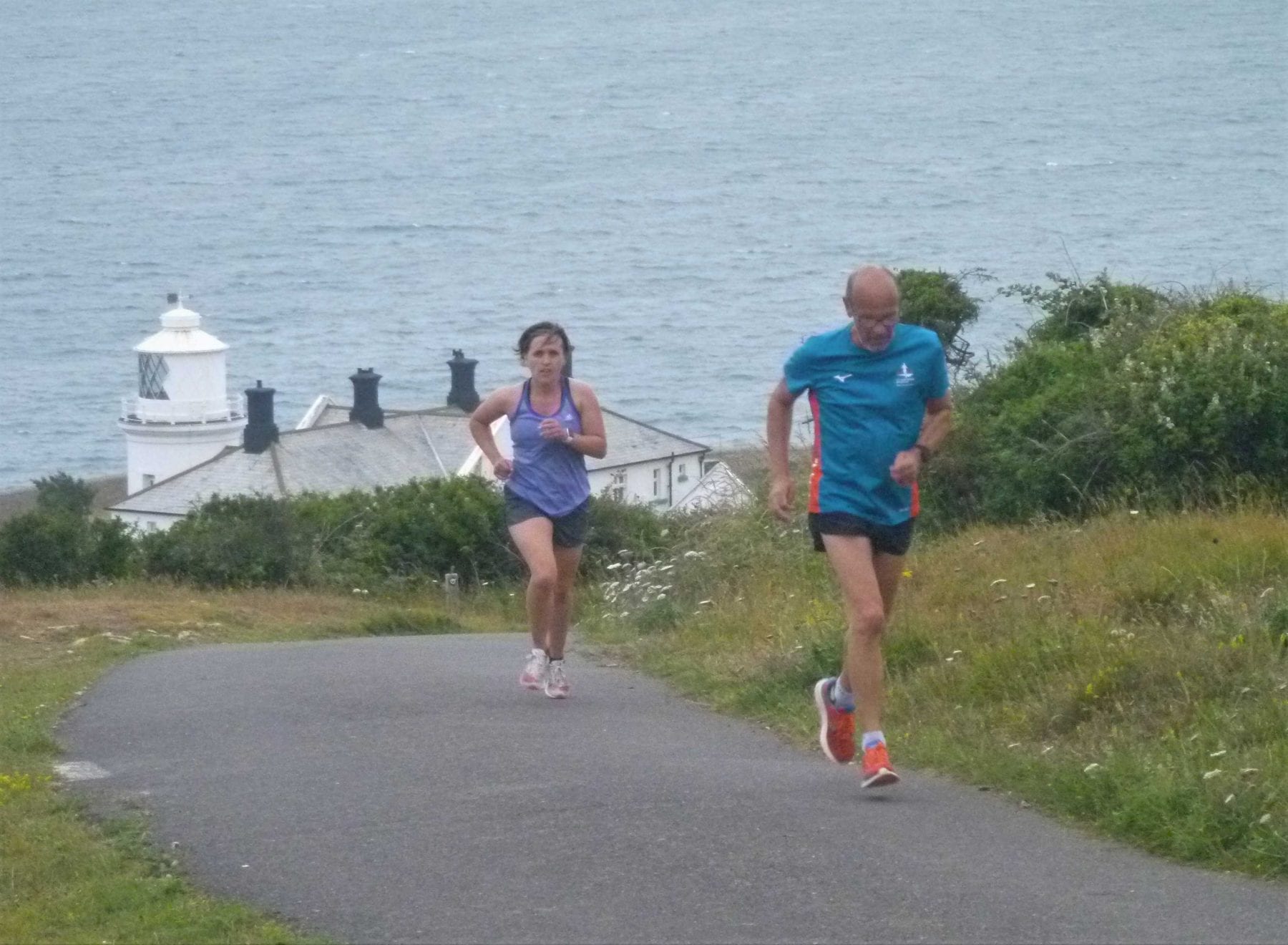 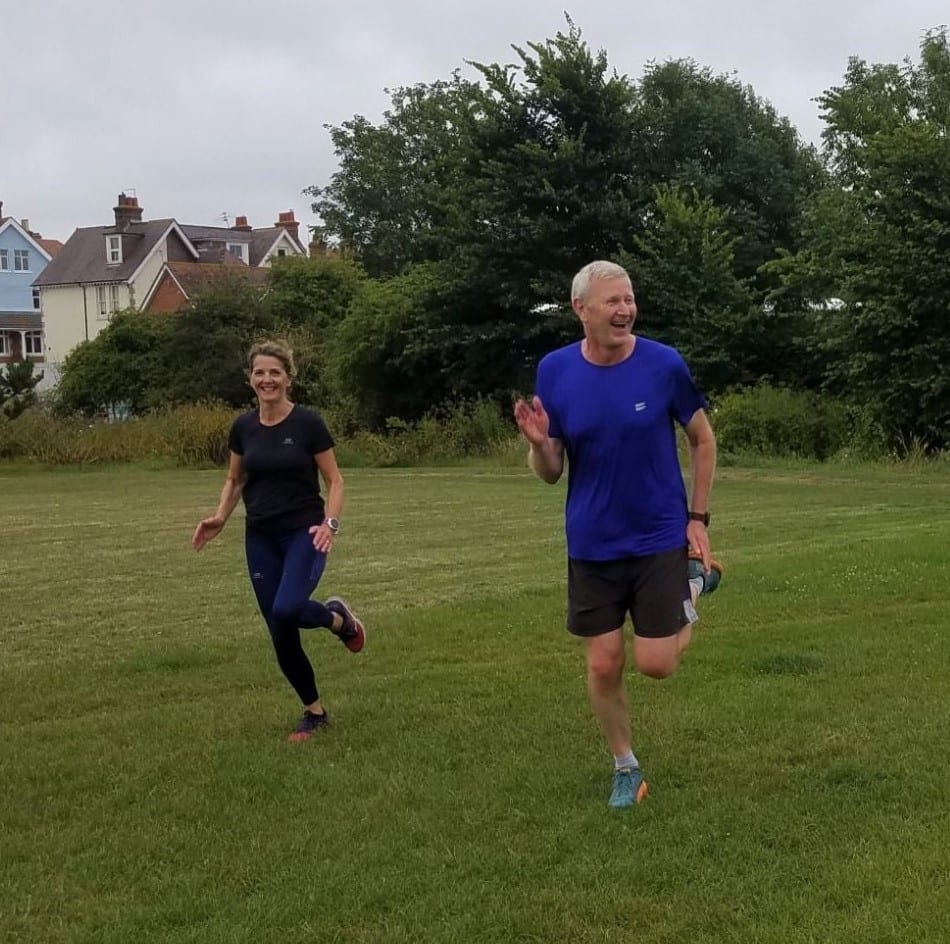 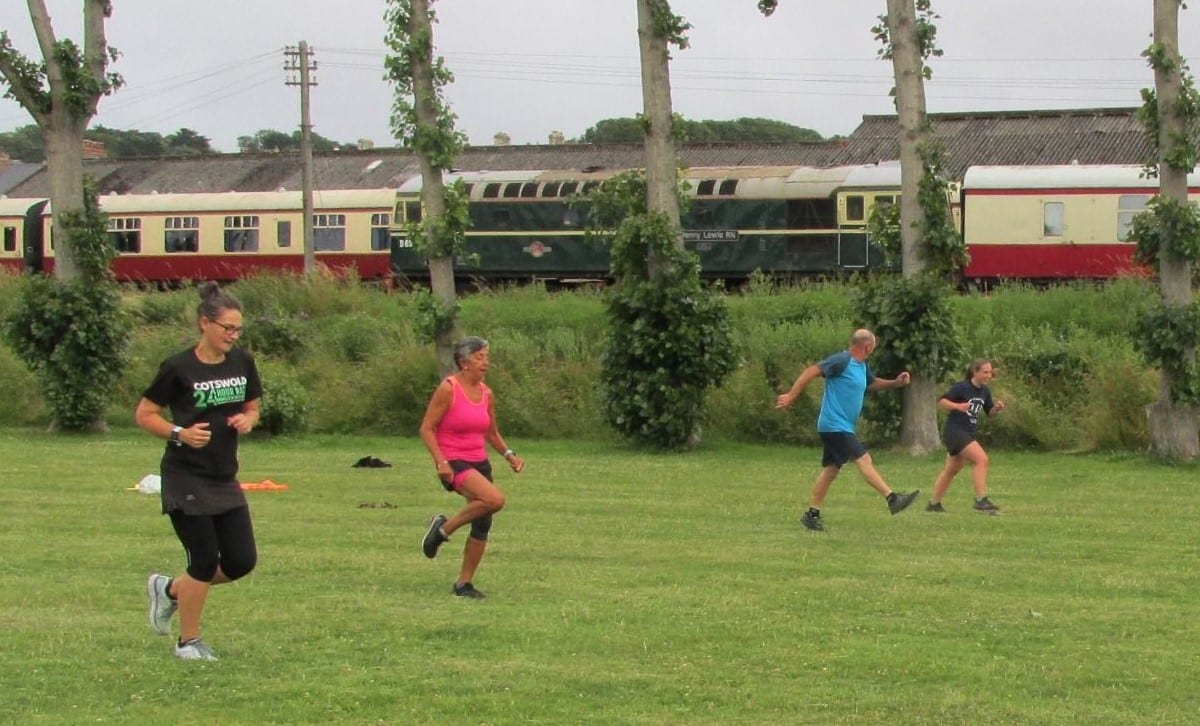 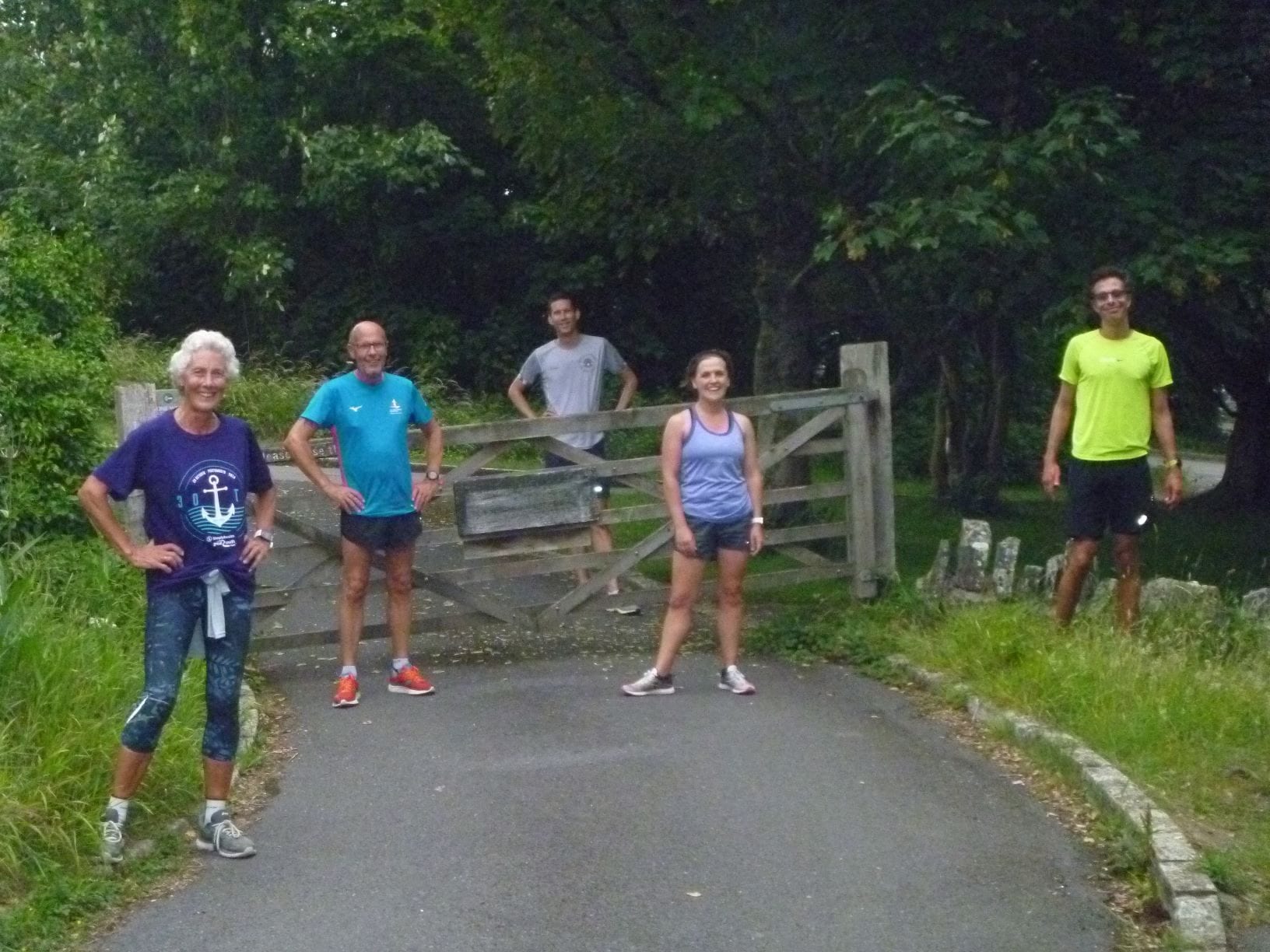 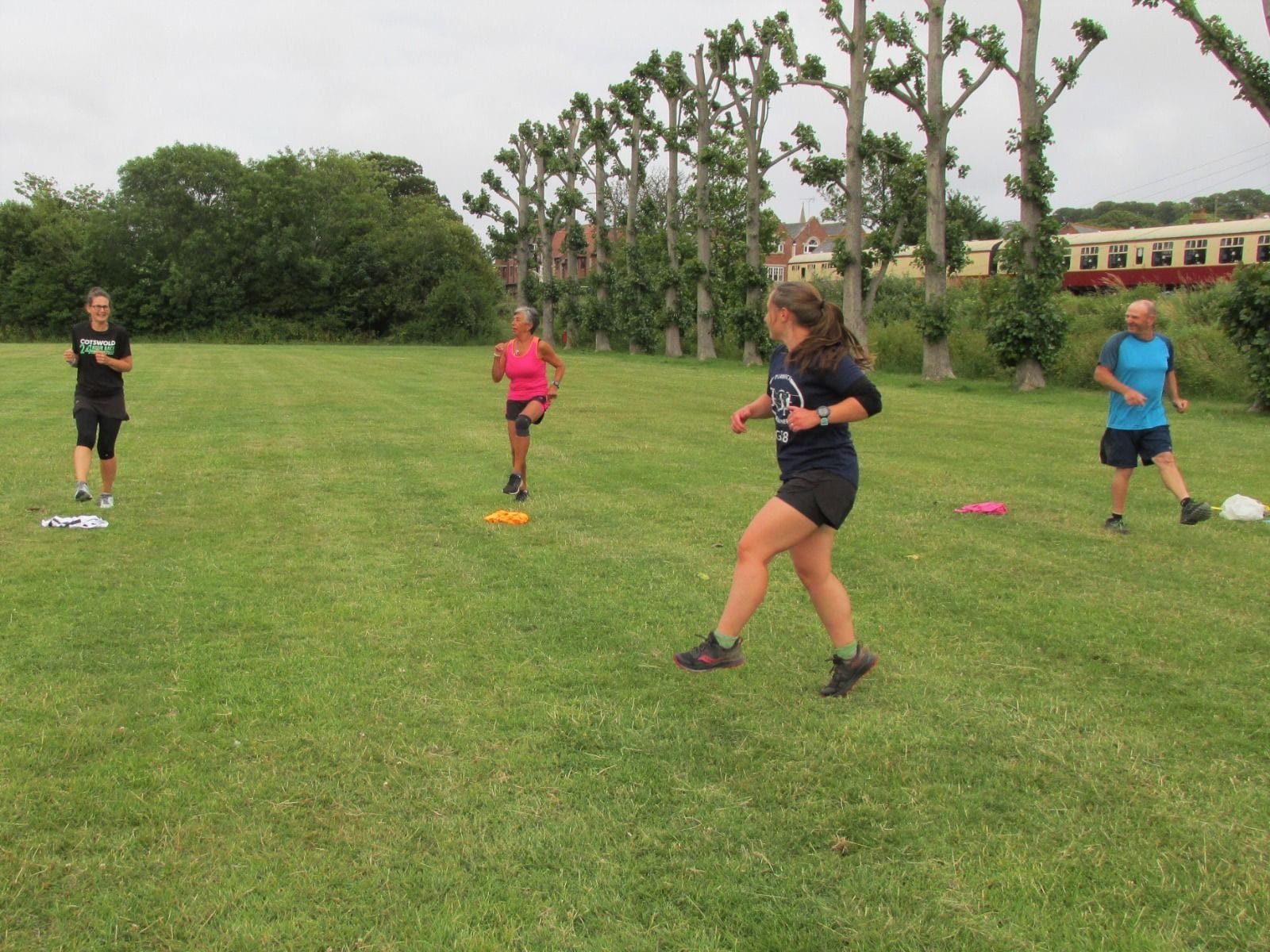 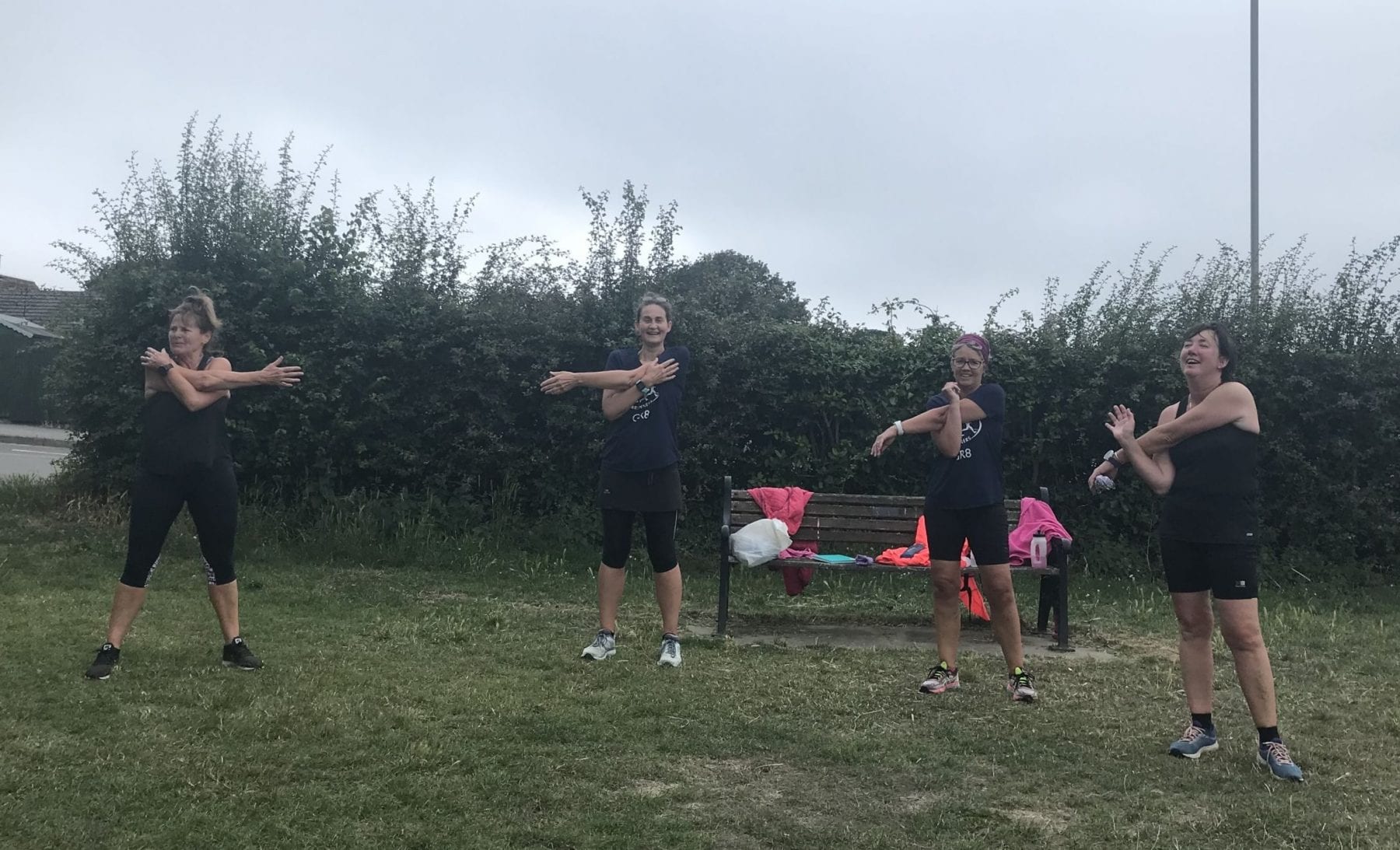 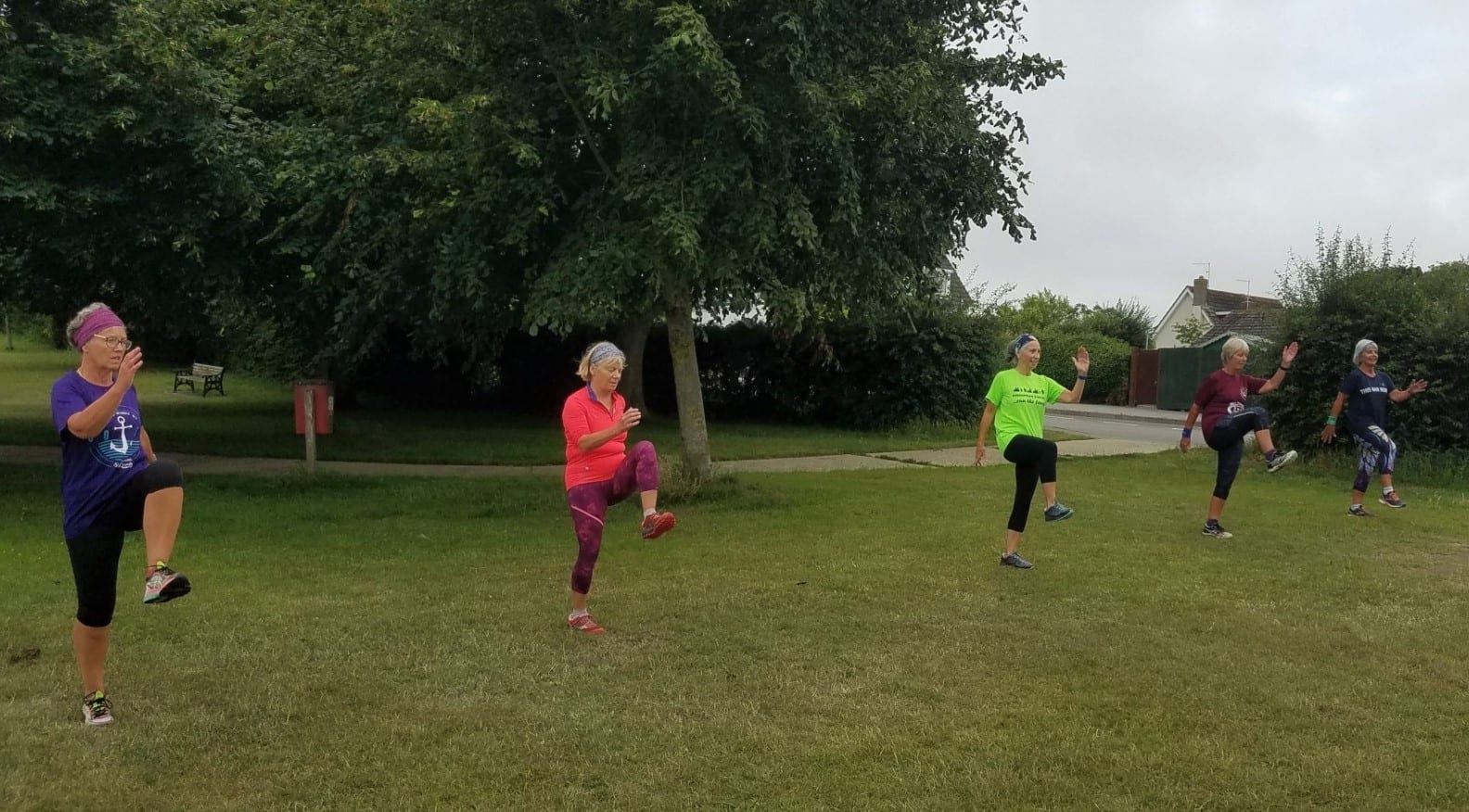 Away from the Wednesday evenings, the members were out and about running and enjoying the summer weather. As the month went on the runners view of the world continued to evolved; in the countryside the fields had started their journey from green to yellow and brown, while in the towns and on the beaches the visitors were arriving as the summer holidays began with the easing of lockdown. Running along Ballard Down towards Old Harry the view across to Studland was now full of yachts and this could be almost any other summer, although in the distance the anchored cruise ships told a different story. Back in Swanage the Council’s summer planting in gratitude to the NHS was a further reminder that things are still not normal.

Below are some runners views from July...Yachts in Studland, anchored cruise ships and the tribute to the NHS on Swanage seafront: 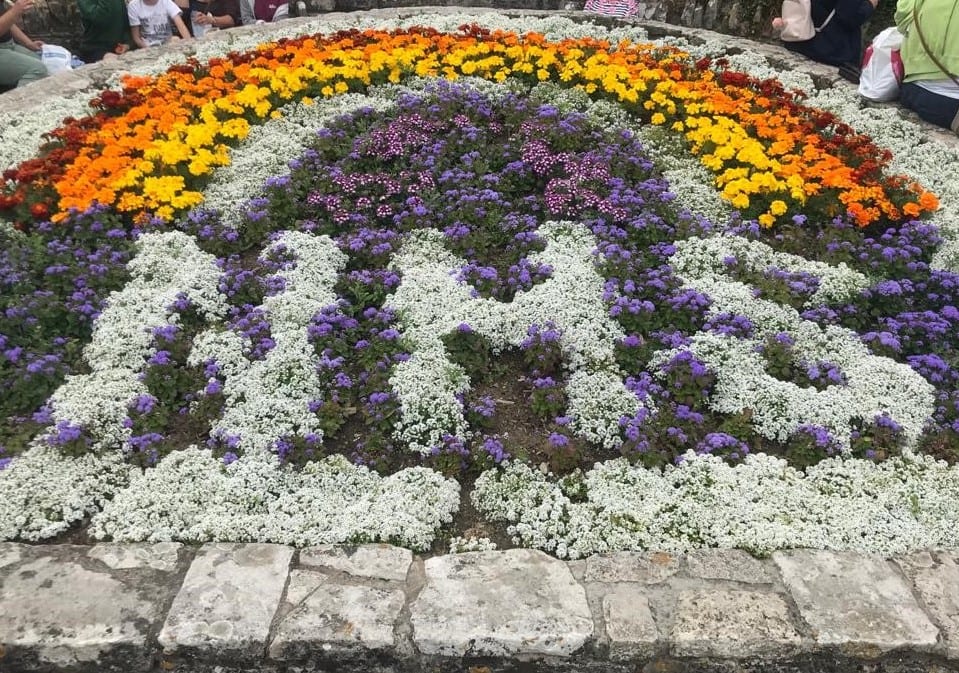 For the competitive, England Athletics and many race organisers are still promoting a huge variety of virtual events and members continue with there own personal challenges. Ross Wayne has kept up with his solo “parkruns” and has smashed his PB for his own Peveril Point “parkrun” with a brilliant 19:54. Awesome! 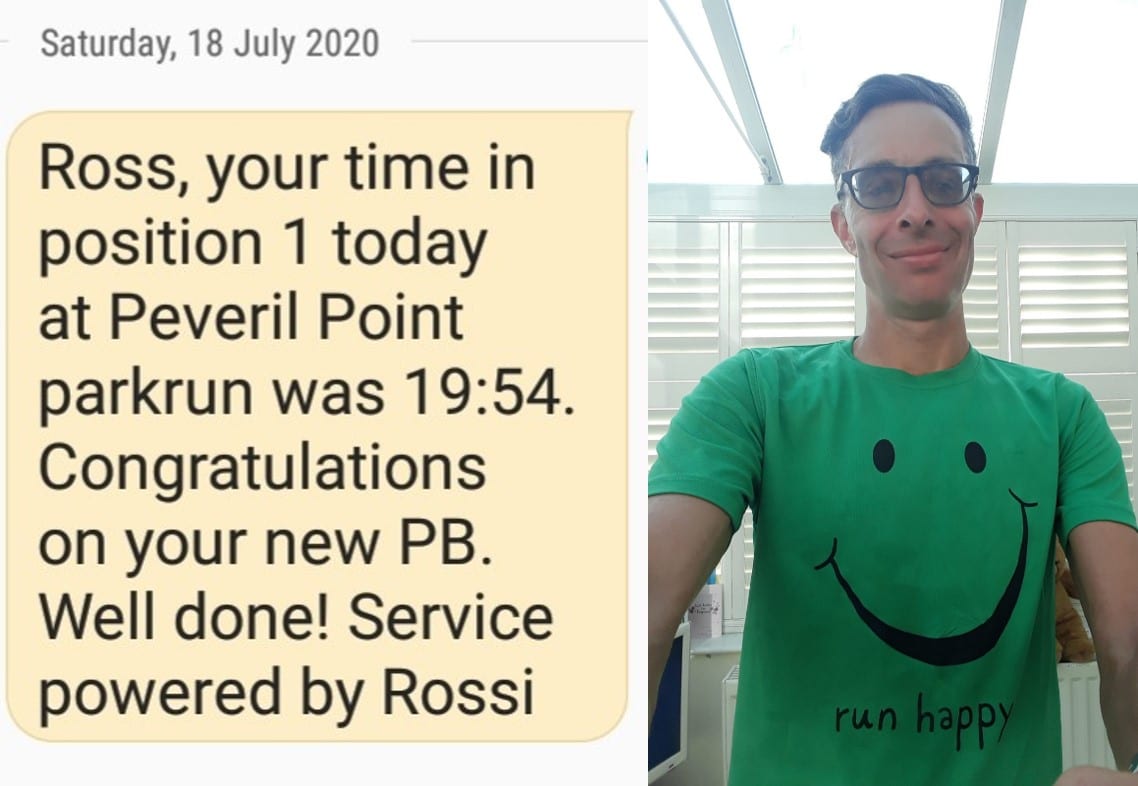 After three weeks of successful training sessions and with further guidance from England Athletics, the club committee felt that is was time to make an initial step back to group runs. Working with the run leaders the plans were updated, new risk assessments prepared and on Wednesday 22nd two groups headed off for runs and two for training sessions. The groups were still limited to six with 2m social distancing and the running routes were carefully chosen to avoid the town and tourist honeypots. Tish Alberry led a group starting at Burnbake for a run over Rempstone Heath, while Rab Spurway led a group along Priest’s Way to Worth Matravers.  Meanwhile Ross Wayne, Jayne Hodson and Abigail Baker held training sessions at Durlston, Nine Barrow Down and Days Park.

The final Wednesday of the month saw three running groups head out. Jayne led a group along Ballard Down to Old Harry, Tish's group took a route via Wilkswood and Knitson, while Rab's headed along Priests Way for Spyway and back to Durlston. Meanwhile, Ross and Abi led training sessions at Durlston and Days Park respectively. It was excellent to see a full house, with all the groups at their limit of six members.

Here are some photographs from the runs and training: 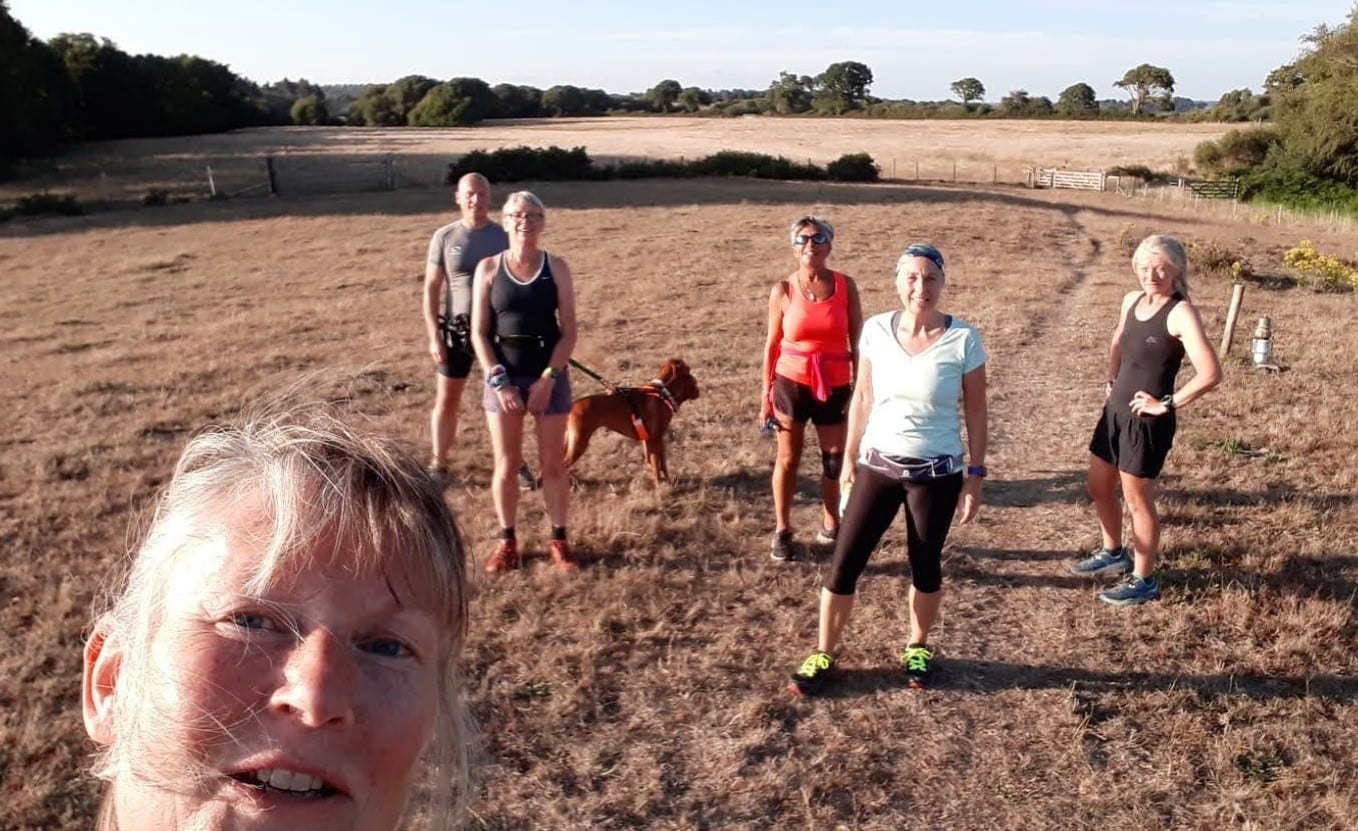 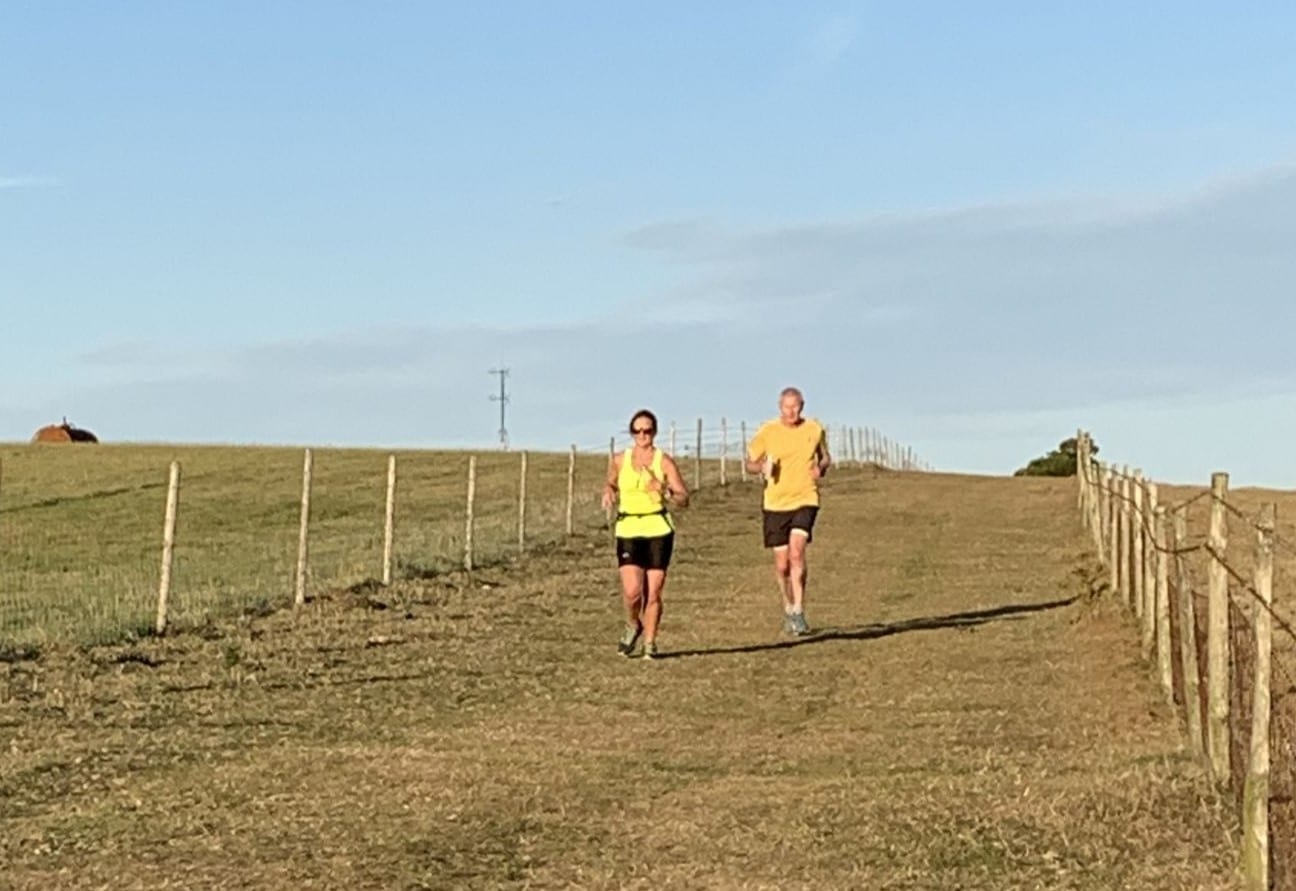 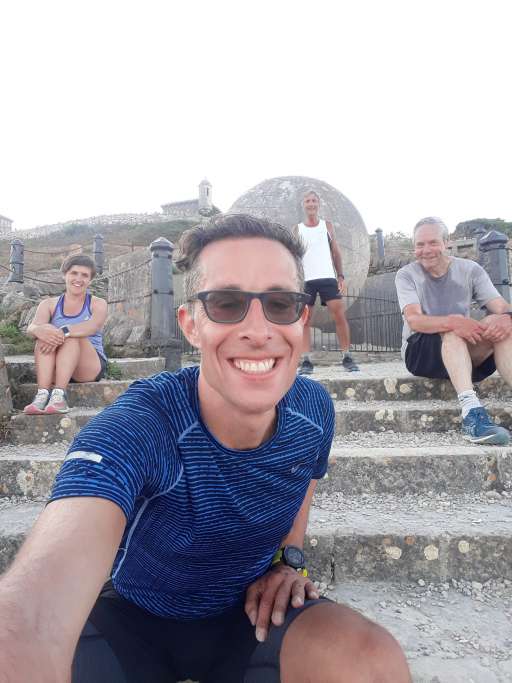 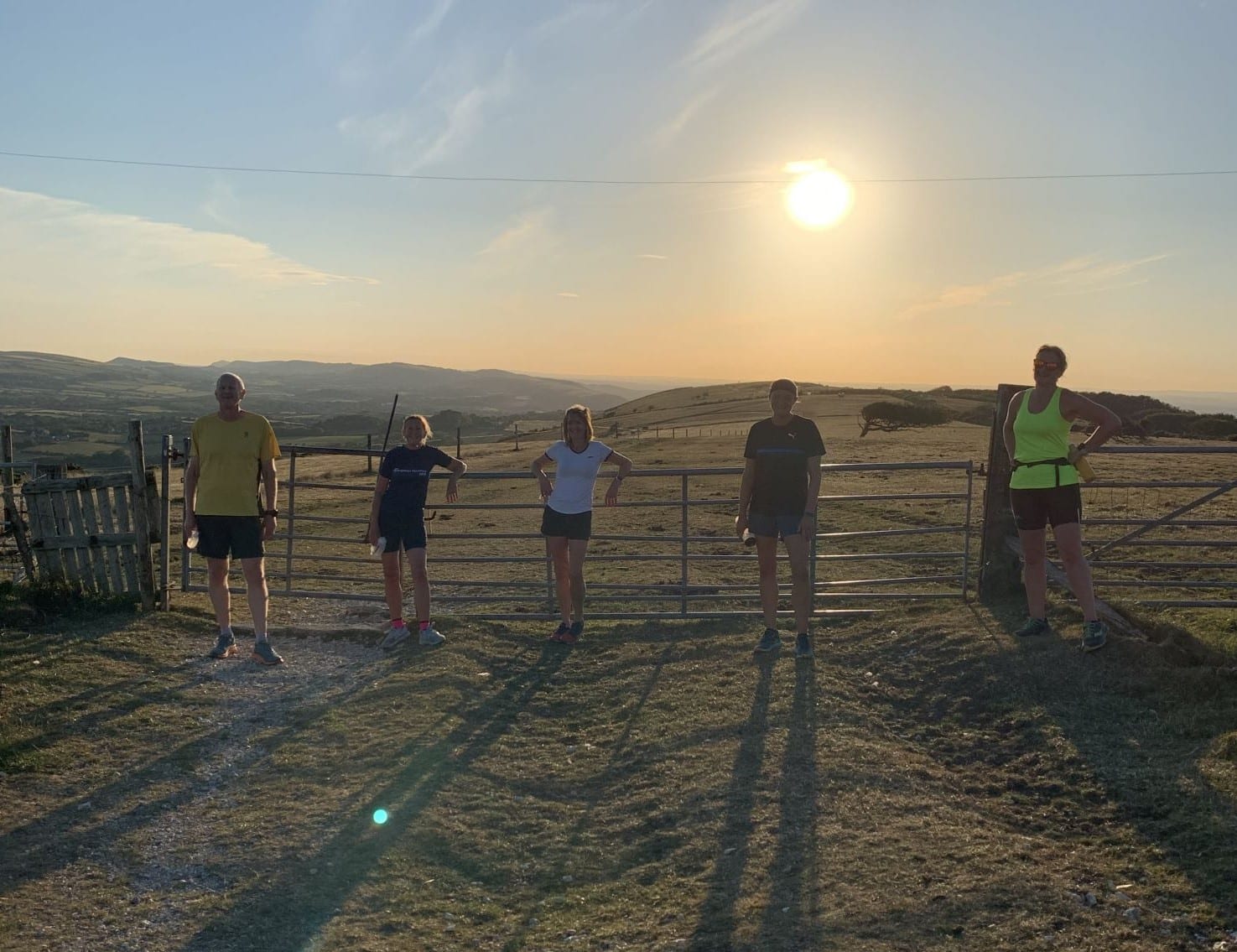 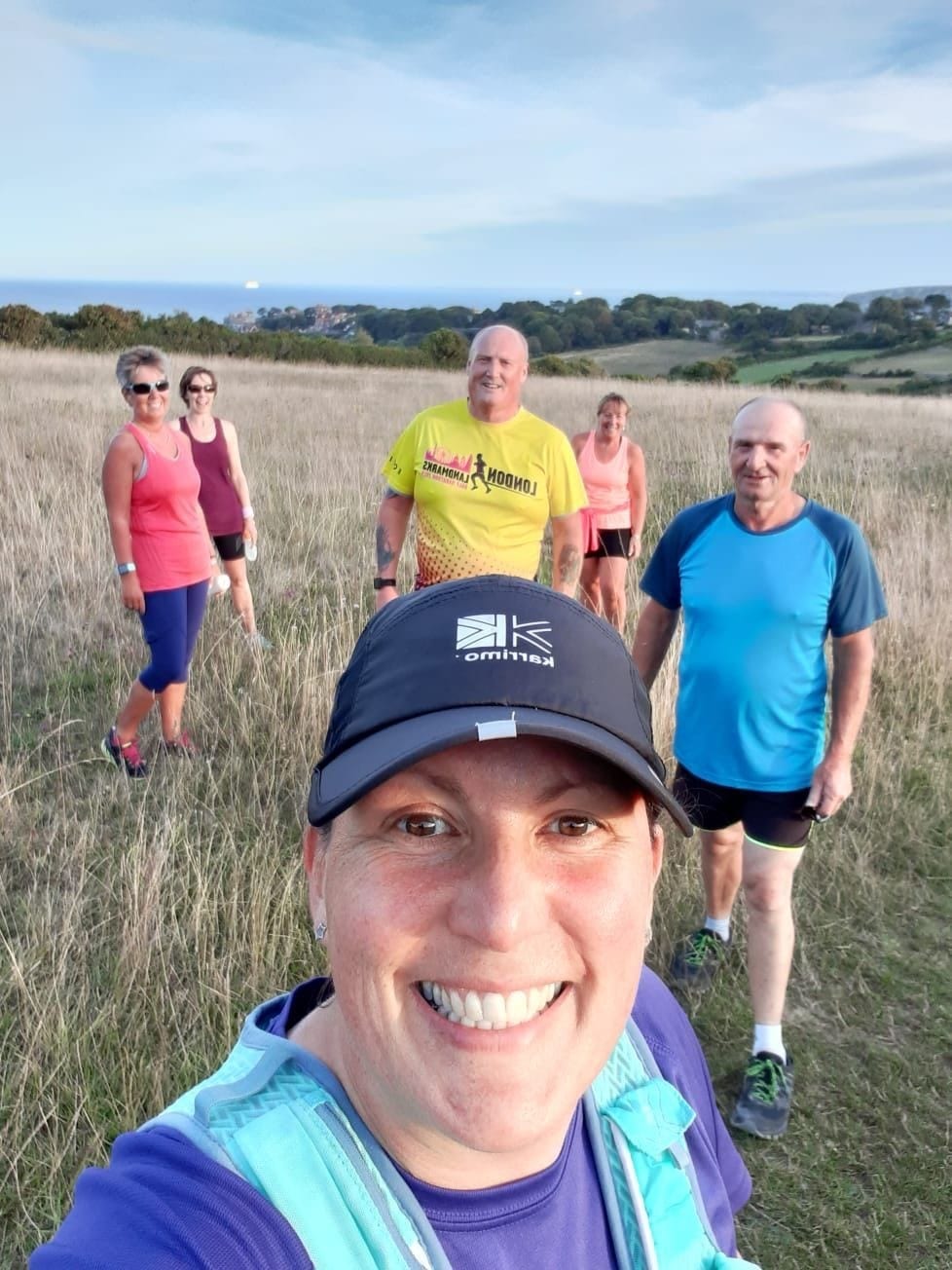 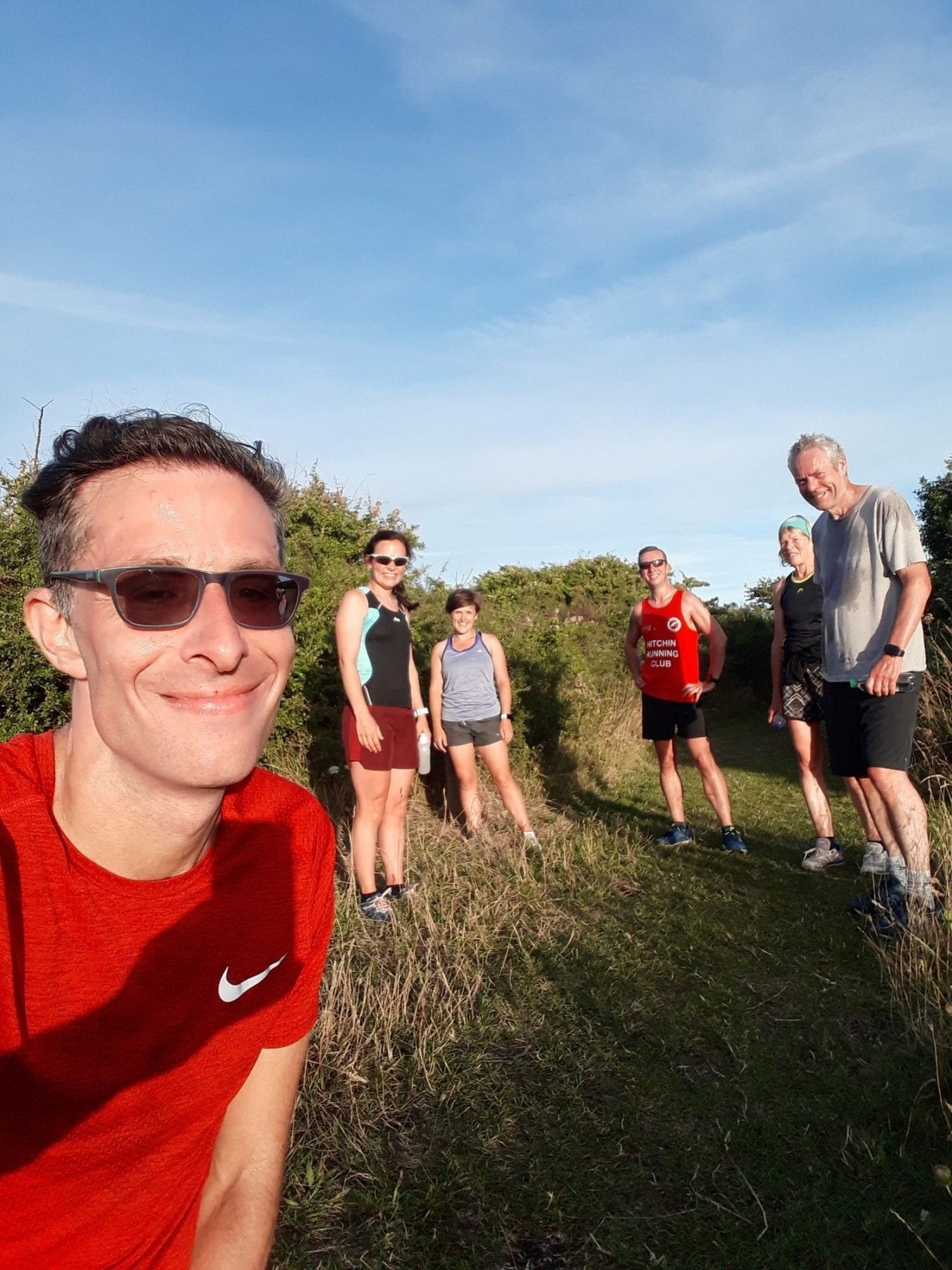 The combination of running groups and training sessions has been a success and enjoyed by the members, so for the time being the club will continue to offer a mixture of both. The situation will keep evolving and guidance will change, so like all running clubs we will try and respond as quickly as possible, but always with everyone's safety absolutely paramount.

For now we can reflect back on July as the month we came together again and it was great! 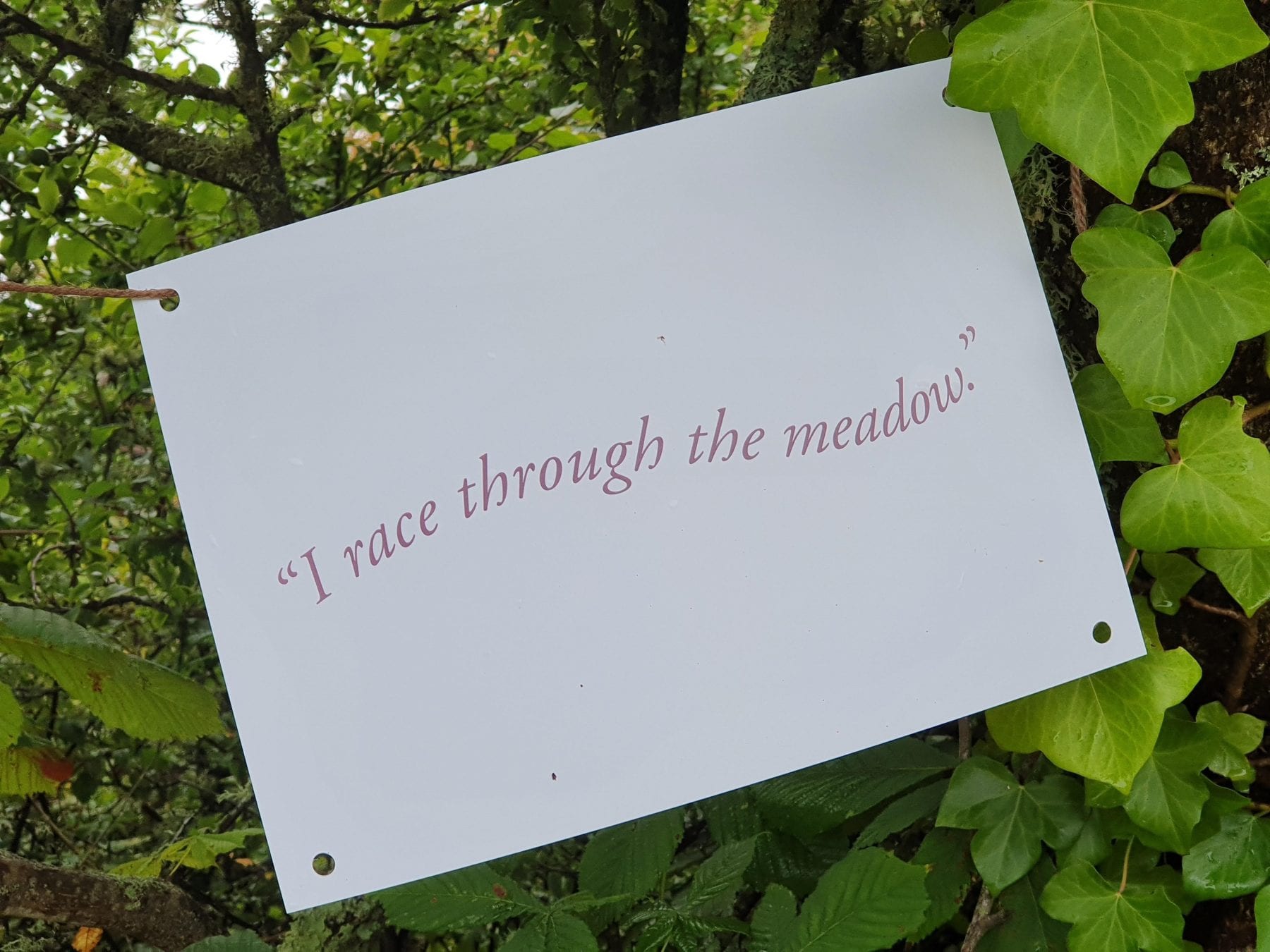