The scene was full of blue and yellow, not from the colours of an August day on the beach, but from Purbeck Runners in their club vests; vests with numbers attached. Racing was back! Things were different; before the start people were keeping their distance and wearing face masks. There was no mass start, but thanks to the wonders of chip timing, staggered starts with allocated start times kept runners apart. You took your own cup, although most took their own water and if you needed an aid station it was two at a time with polite queuing in the middle of a race. However, it was racing, back after a five month gap and everyone was clearly enjoying it! This was the Ooser, but while it was the first big turnout event for the club, it wasn’t the first race. For that we must head to Devon…

First out of the blocks was Ross Wayne who made a dawn start on Saturday 9th August to travel to the Summer Trails 5k at Ashcombe in Devon. Along with all races at the moment there were strict COVID-19 control measures and it was run on a time trial basis with allocated start times. Ross stormed around the challenging course in the beautiful Grammarcombe Woods to claim a fantastic podium finish with 3rd place. This topped off a perfect weekend in which Ross also posted a PB on his own personal Peveril Point “Parkrun”! 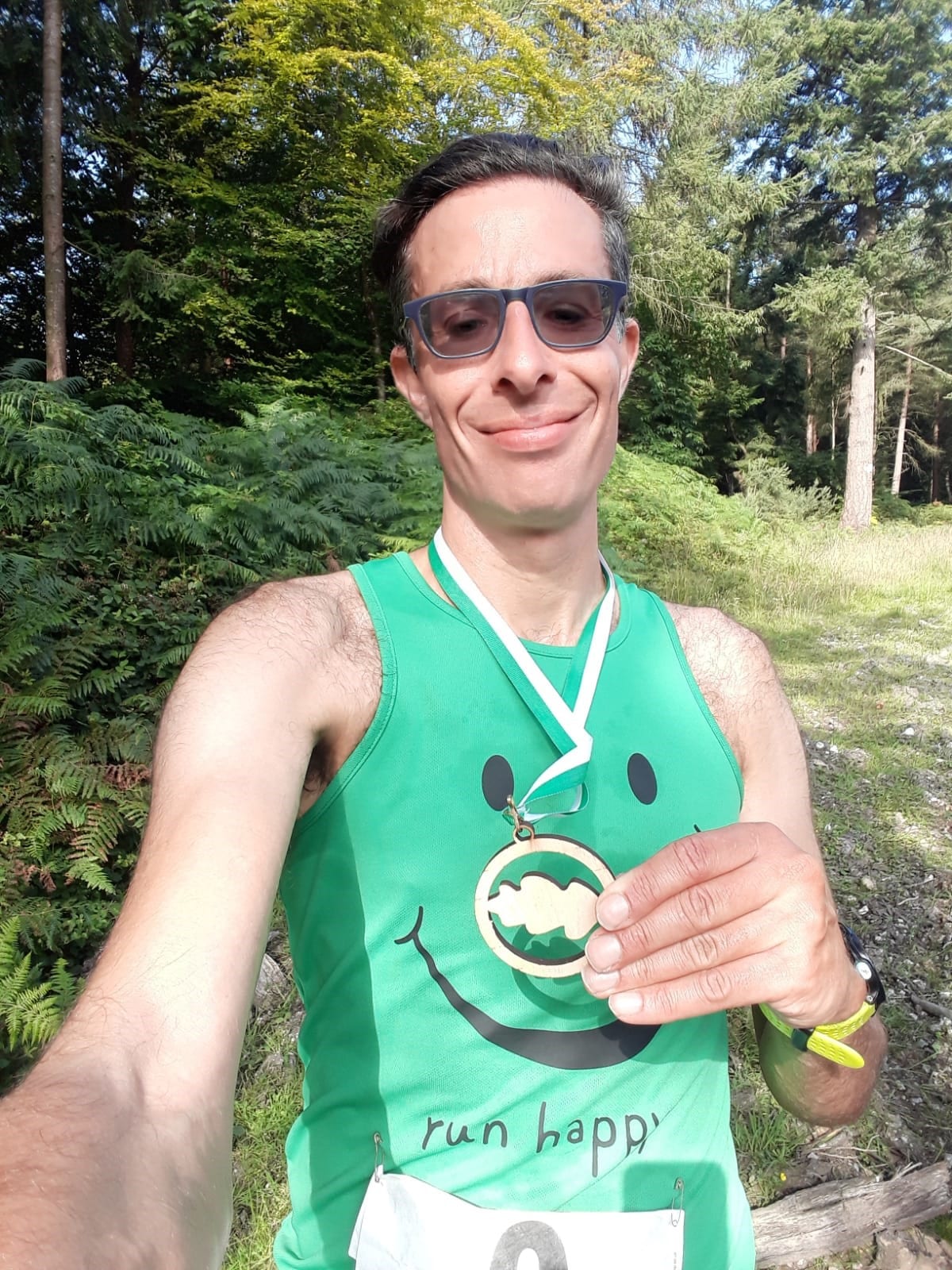 A week later and the club’s Liz Bemment was lining up for the Maverick Adidas Terrex Original Dorset race. Starting outside Swanage at Wilkswood Farm the runners headed off at 15 second intervals on the 16k course aiming first for Dancing Ledge and then following the iconic, very hilly and technically challenging coastline past Winspit and up to St Aldhelm’s Head. From there it was the dreaded steps down and straight back up the dry valley, before heading back inland giving some 267m (876 feet) of rough ascent. At the following Wednesday evening club training on top of Ballard Down Ross Wayne did his usual club night MC job, albeit just to his small group of 7 and asked “Did anyone do any races at the weekend?” Liz who was in the group was able to put her hand up! She was clearly delighted to have been racing and described the race and how well managed it was. In a very competitive field Liz put in a brilliant performance to finish an excellent 46th in a superb time. Liz got the traditional round of applause – a lovely bit of normality!

The follow day and it was the Ooser, one of the classic Dorset races which is part of the Purbeck Trail Series. The Ooser, pronounced “osser,” gets its name from a carved wooden head from Dorset folk culture, which also makes for a striking race medal. The half marathon loops around the idyllic Piddle Valley, starting in Turners Puddle, which time appears to have forgotten and takes in Black Hill, Tolpuddle, Affpuddle and Bryants Puddle. The route provides a wonderful mix of flood plain, wooded hills and heath, but the beautiful landscape has a deceptive sting with over 340m (1,120 feet) of ascent! The race has always been popular with the Purbeck Runners, being part of the club championship and 15 members took part.

Tish Alberry praised the race organisers for how well organised the event was and how safe it felt. “Kevin and Denise had thought of everything. Even the toilets were socially distanced! We were asked to stay in our cars until nearly race time. We were called forwards in groups and walked to the start wearing face masks. Starts were staggered and in groups of six.”  It drizzled with rain for most of the race, so puddles in the “Puddles” but as Tish said it didn’t dampen any spirits. Tish summed it up by saying “It was so much fun to meet up and race again with a really good Purbeck Runners turnout. We loved every minute of it.” The long layoff from racing doesn’t appear to have affected people’s pace as there were some stunning performances by Purbeck Runners. First home for the club was Jayne Hodson who absolutely flew round to finish in 1:57:18 as 32nd overall out of 277 and 4th woman. Close behind were Dawn Cosh and Paula Lawton-Archer who also had excellent races. David Hodson was the first man to finish for the club, closely followed by Andy Byrom, making it a great day for the Hodson household! In the Canicross event Dave Lawton was running with Ruby and Margo, mother and daughter Hungarian Vizslas and it was great to see Dave and “the girls” back in race action again.

The photographs below show some of the action from the race... 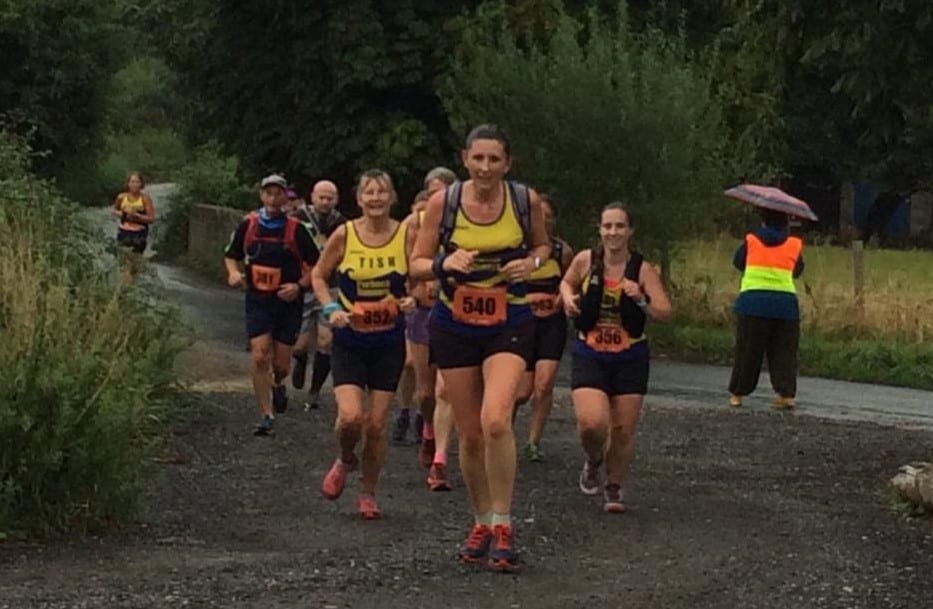 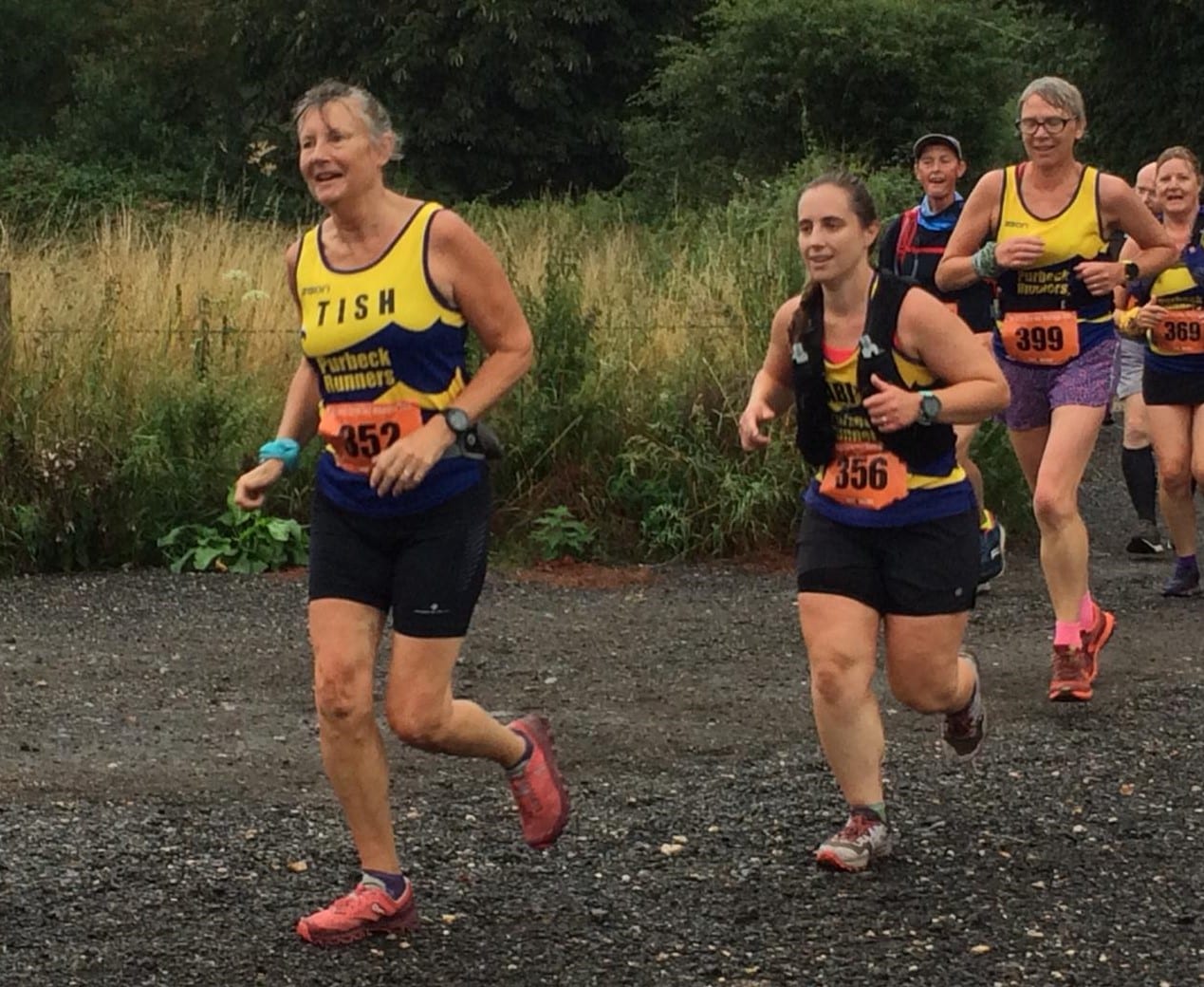 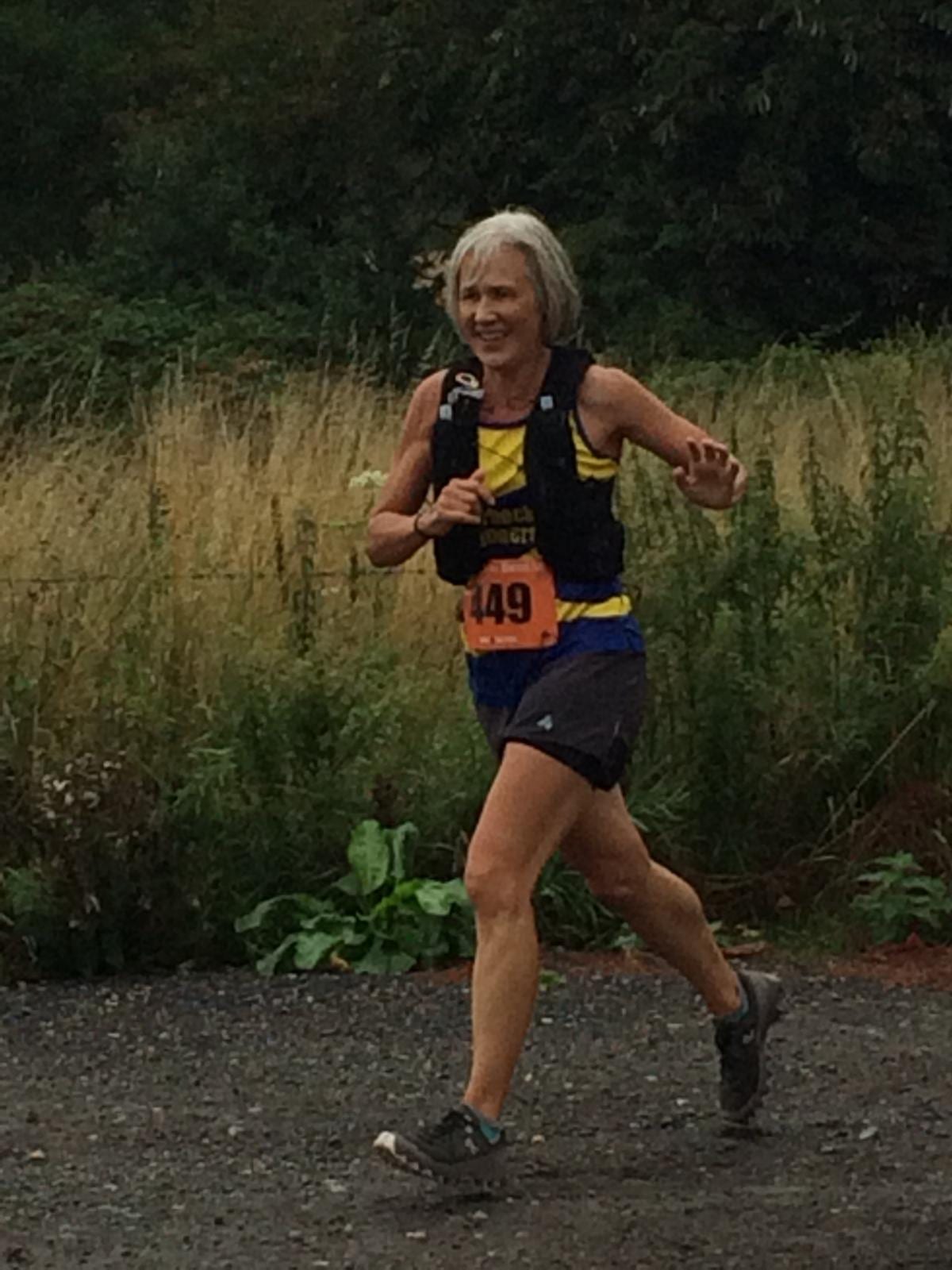 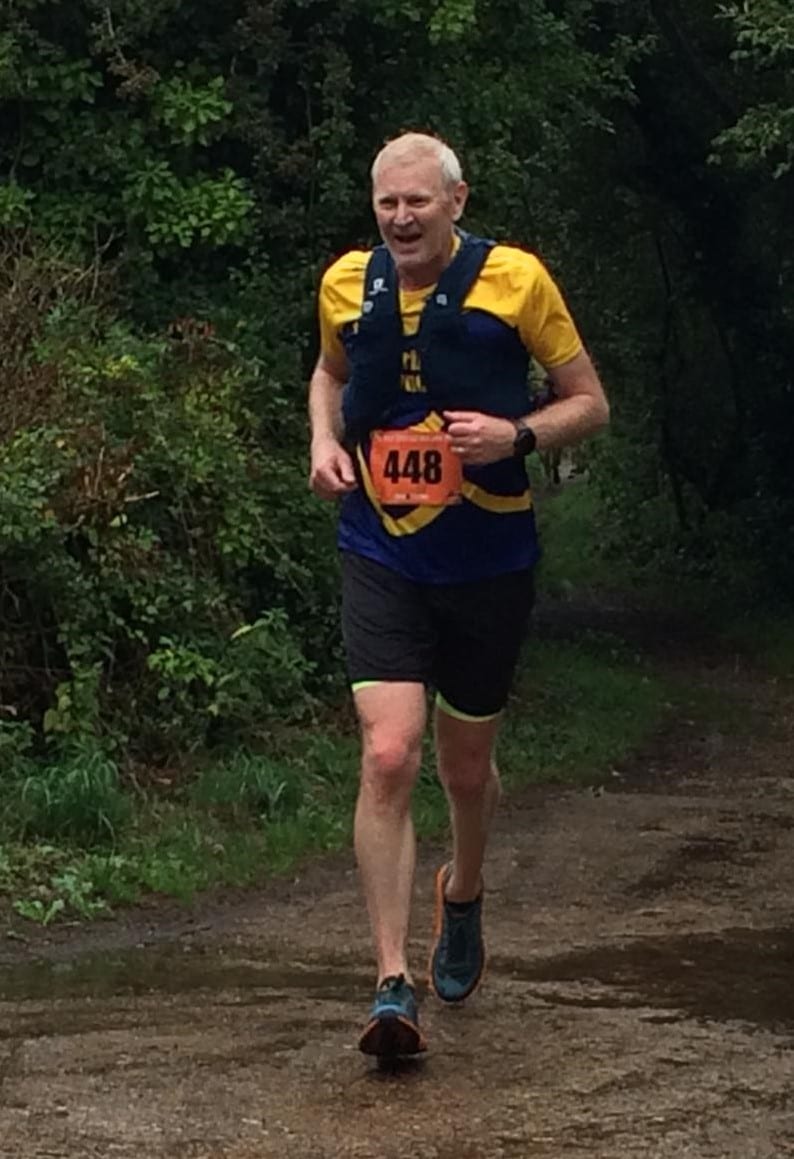 David Hodson, first man to finish for the Purbeck Runners 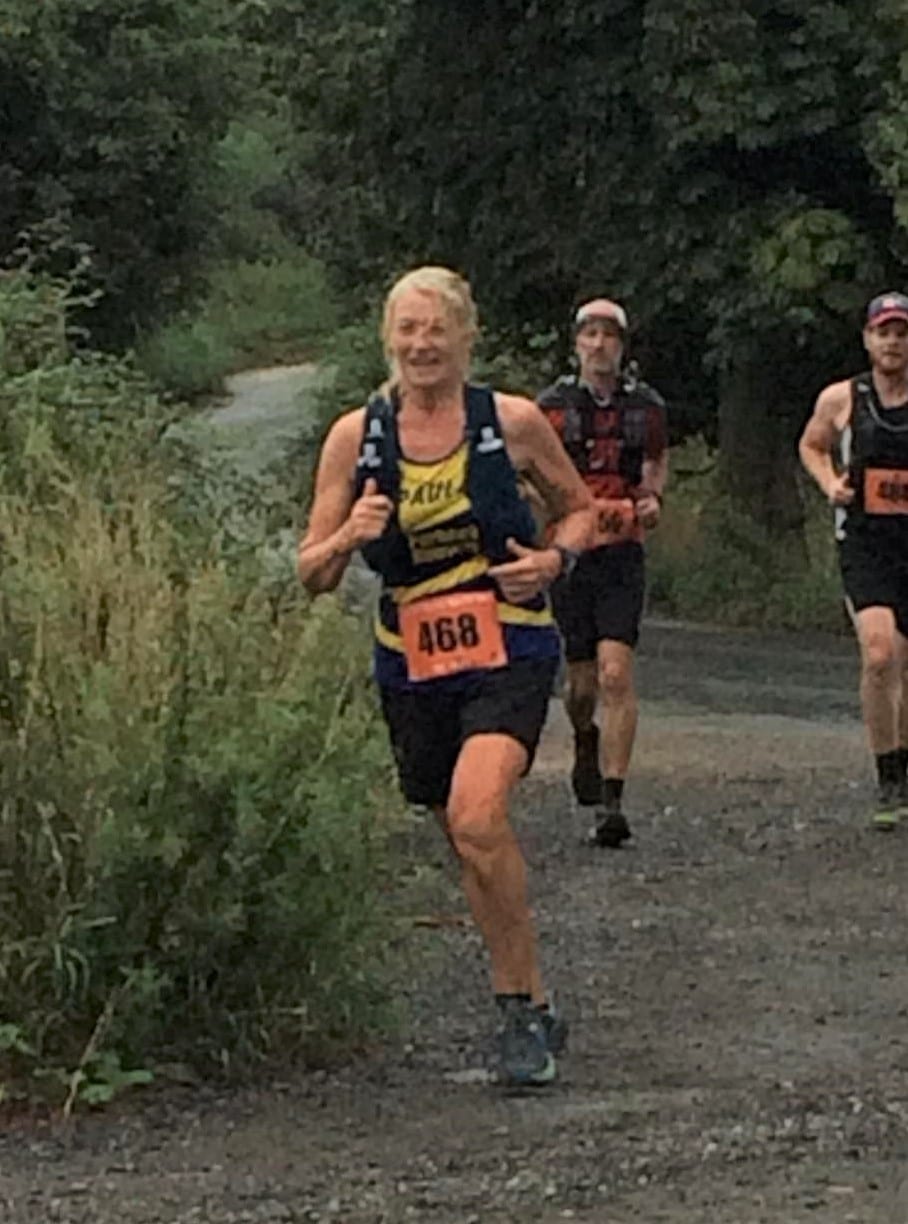 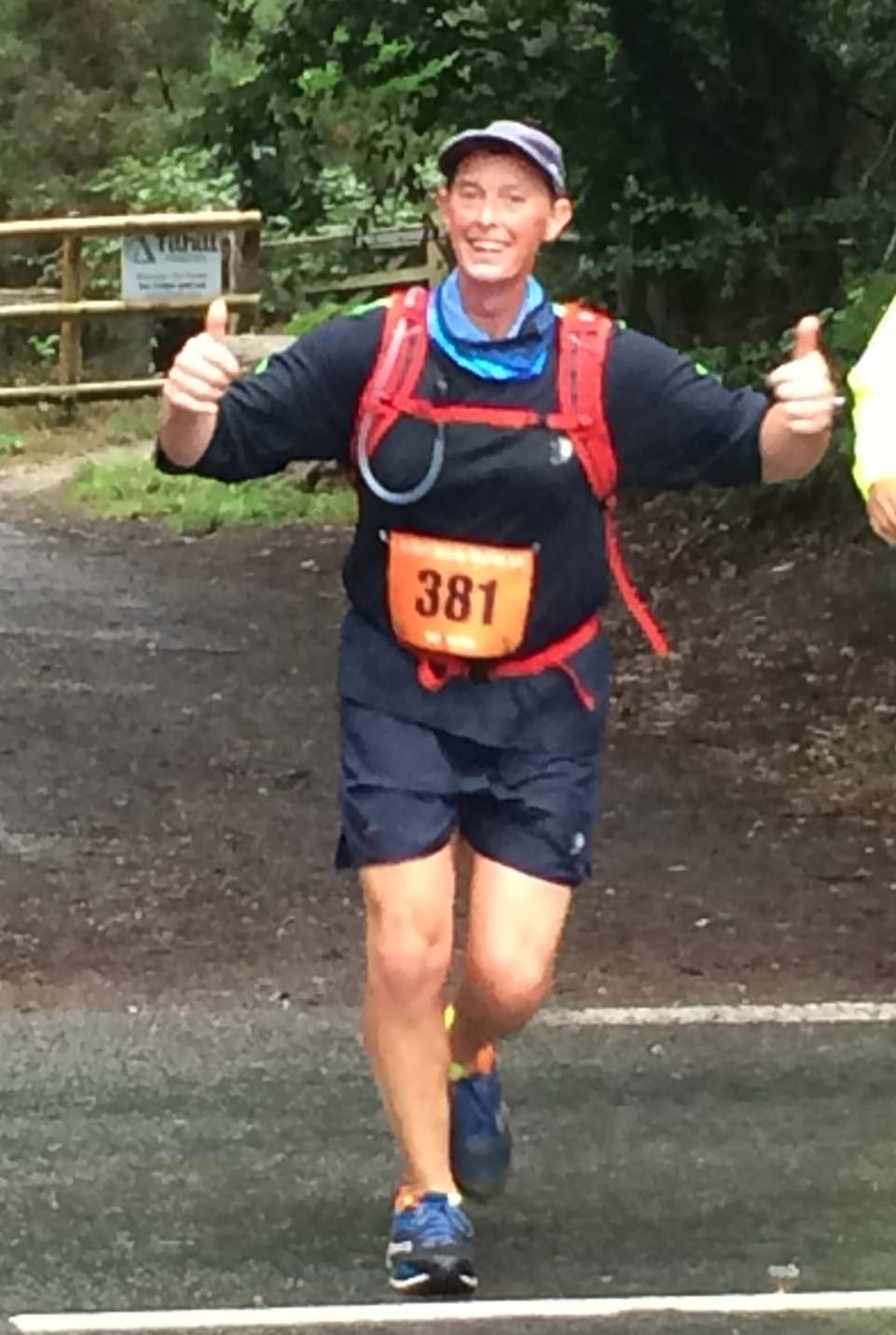 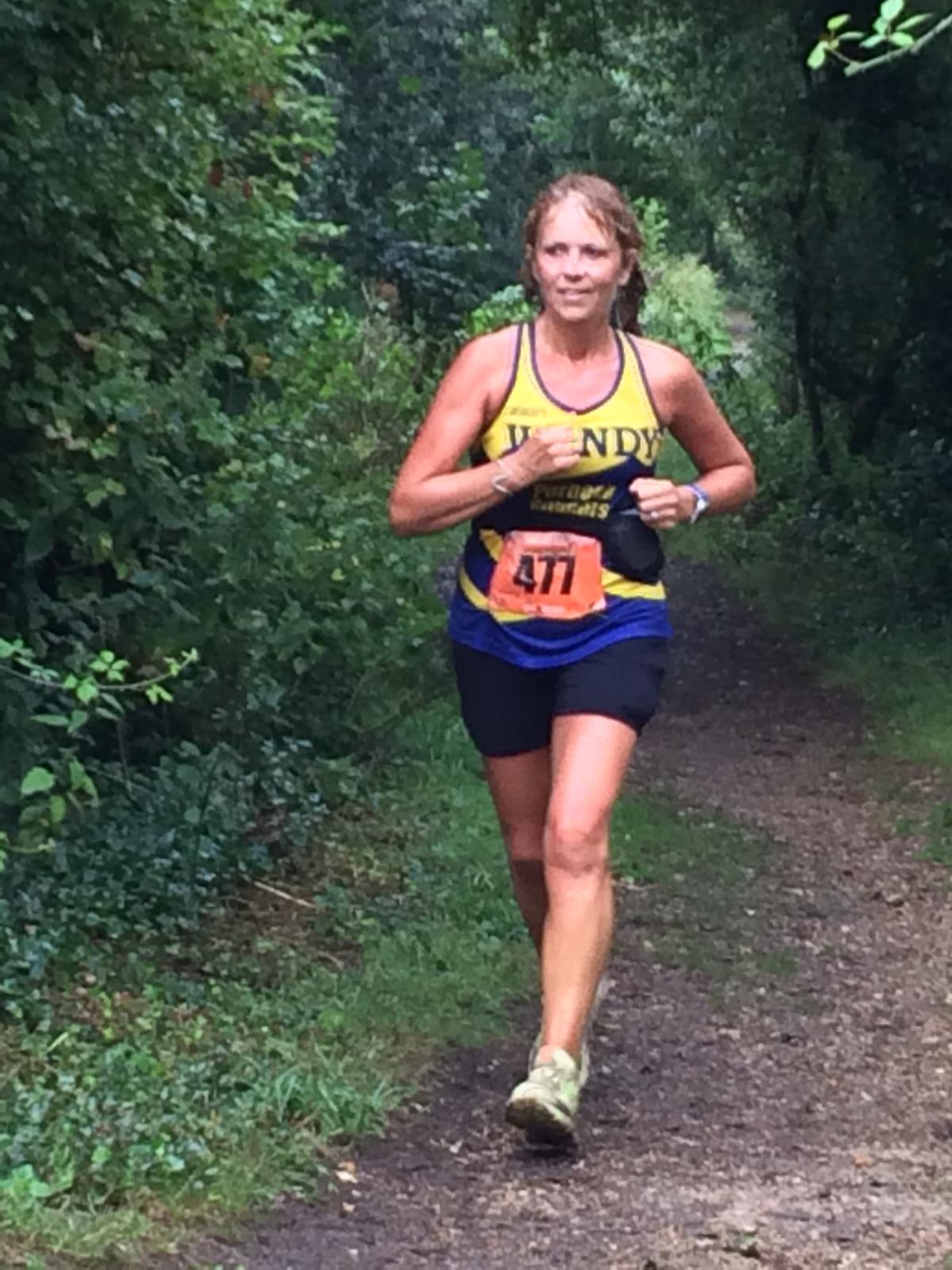 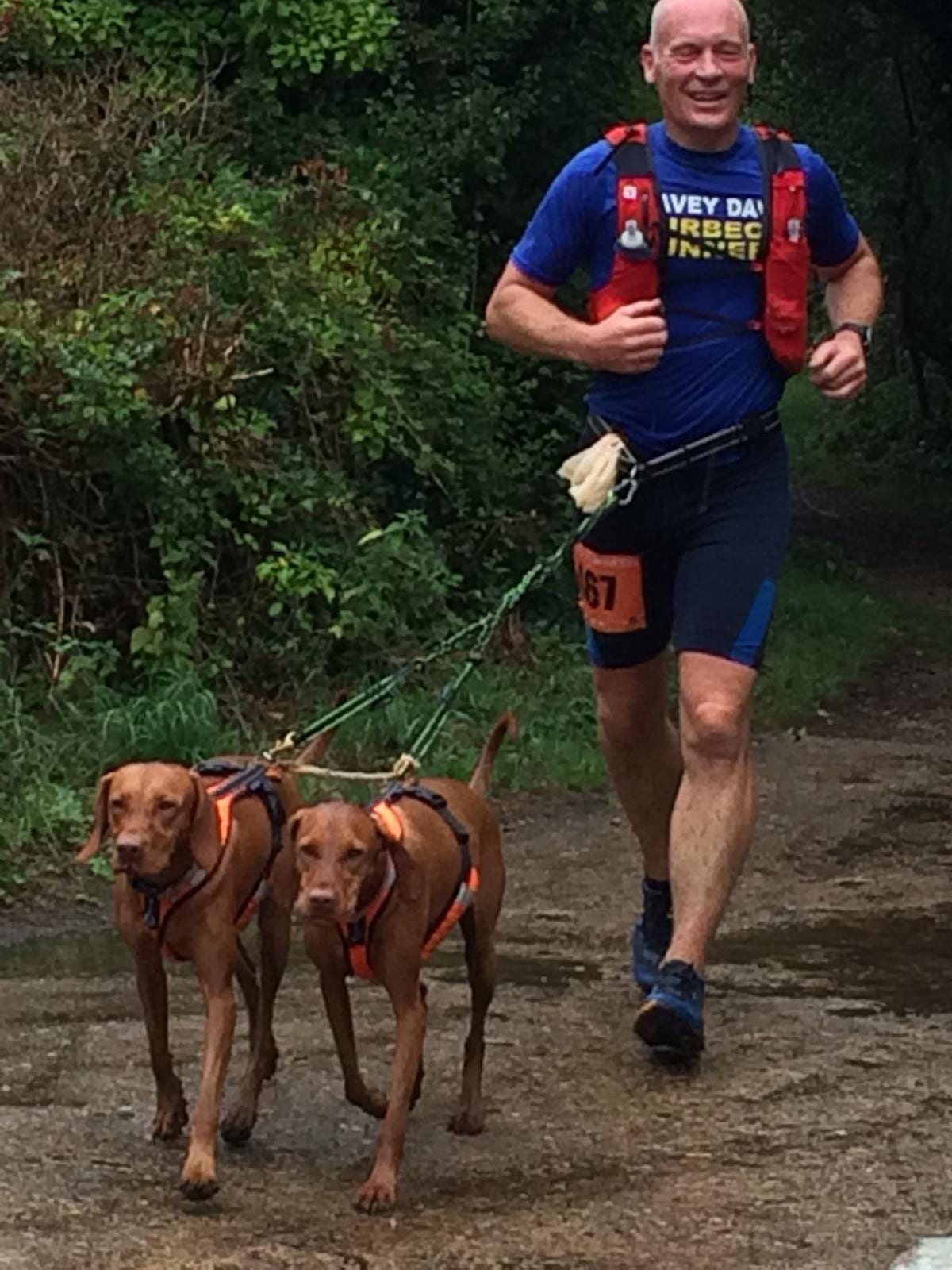 Dave Lawton with Ruby and Margo

The following weekend saw a Purbeck Runner in a very different race when Clare McDermott competed in the New Forest Triathlon. The event was based at Moyles Court School, with the swim taking place in Ellingham Lake, followed by a wonderfully scenic bike ride through the New Forest and the run finishing back at the school. Clare took part in the Sprint Triathlon involving a 400m swim, 33k bike and 5k run and put in a fantastic performance, as you can see from the photograph below where she is flying along in the run! 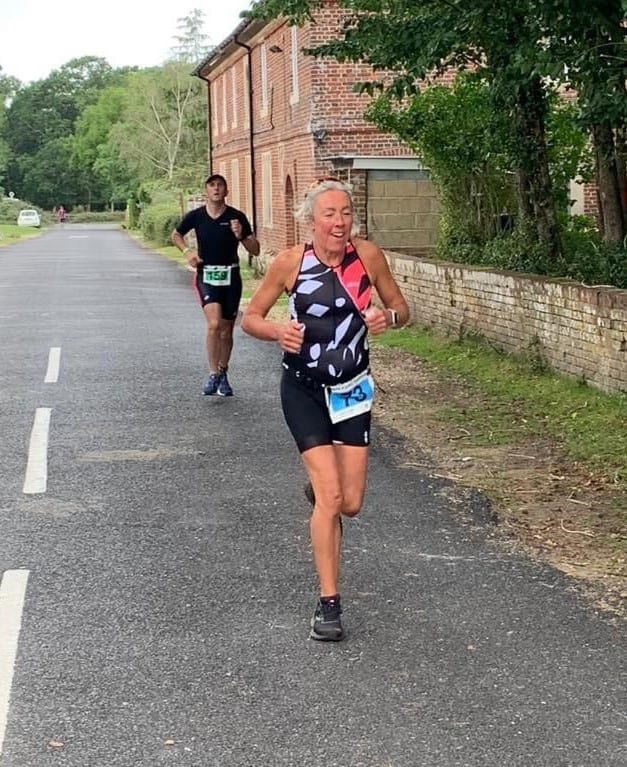 August on the Isle of Purbeck means peak holiday season and this year feels as busy, if not busier, than usual. For the club runs and training sessions it has meant carefully choosing the meeting places and routes to avoid the crowds and maintain the essential precautions that have been put in place in the club’s COVID-19 Return to Activity Plan. Under the England Athletics’ rules we have been able to allow for groups of up to 10 by carefully managing our activities in a COVID Secure Environment, although through our risk assessments have reduced that number if the session or route dictated. Organising club activity under the very necessary rules brought about by Coronavirus is not easy and it all takes a lot of planning and hard work by the Group Leaders, the Runs Coordinator and Committee members who of course are all volunteers. However, it is all worth it and very satisfying to see the members who have taken part enjoying running together again, as you can see from this selection of photographs… 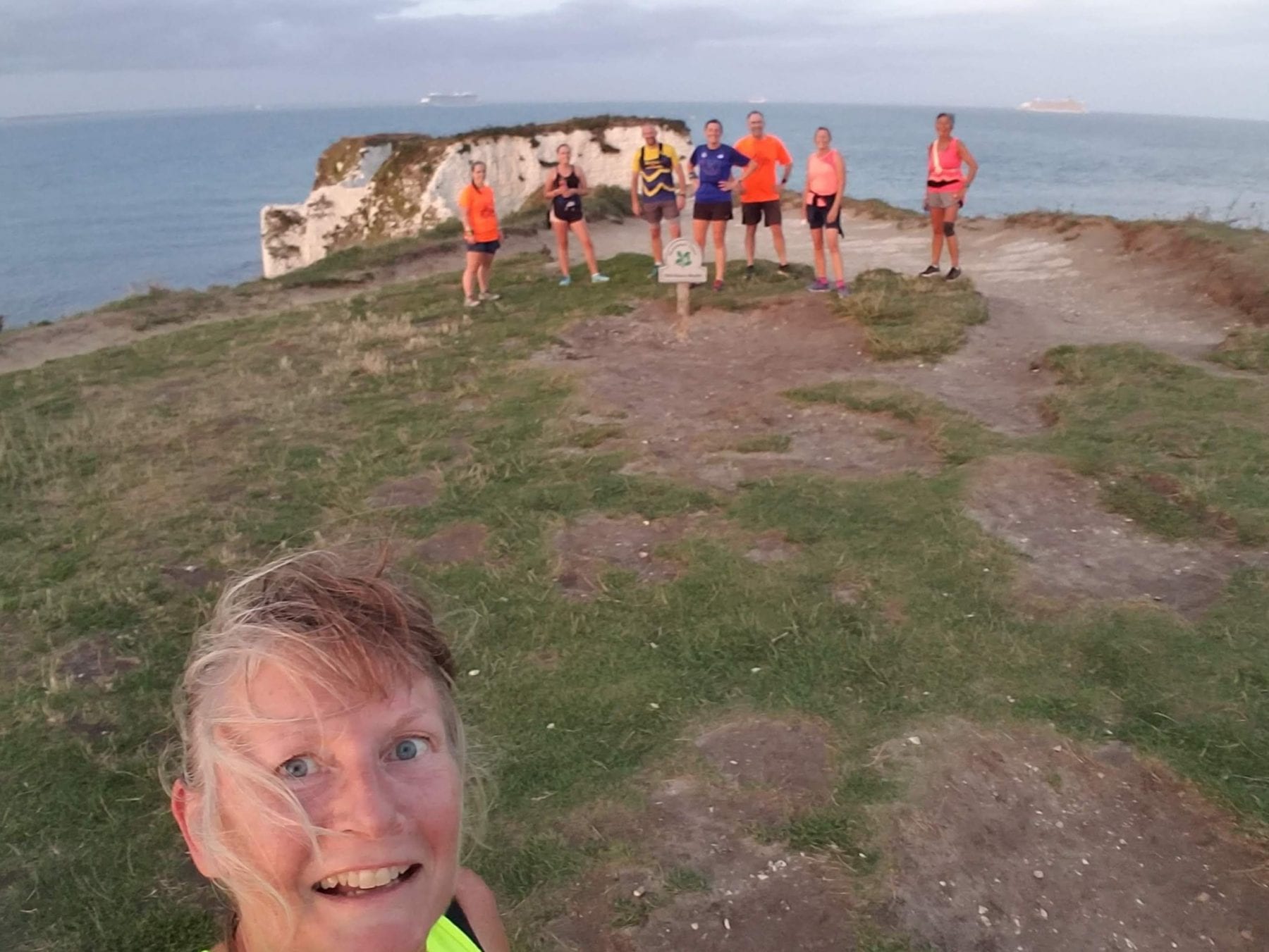 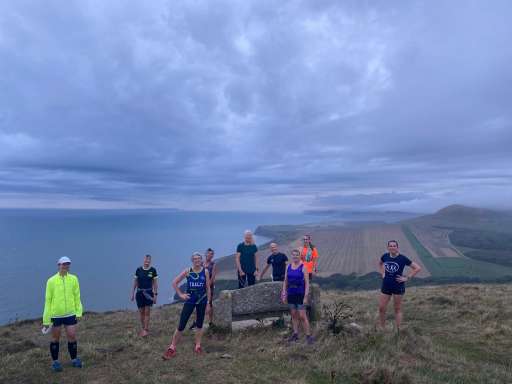 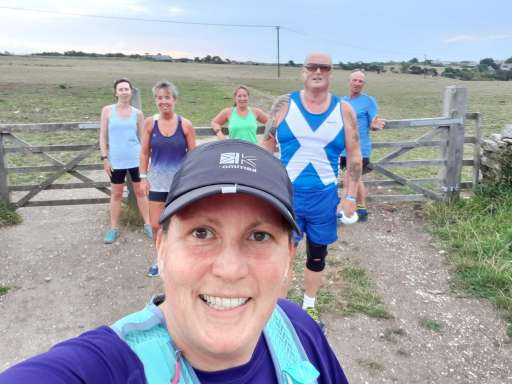 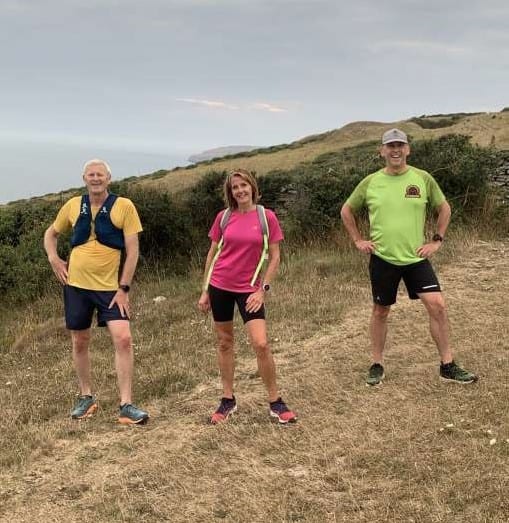 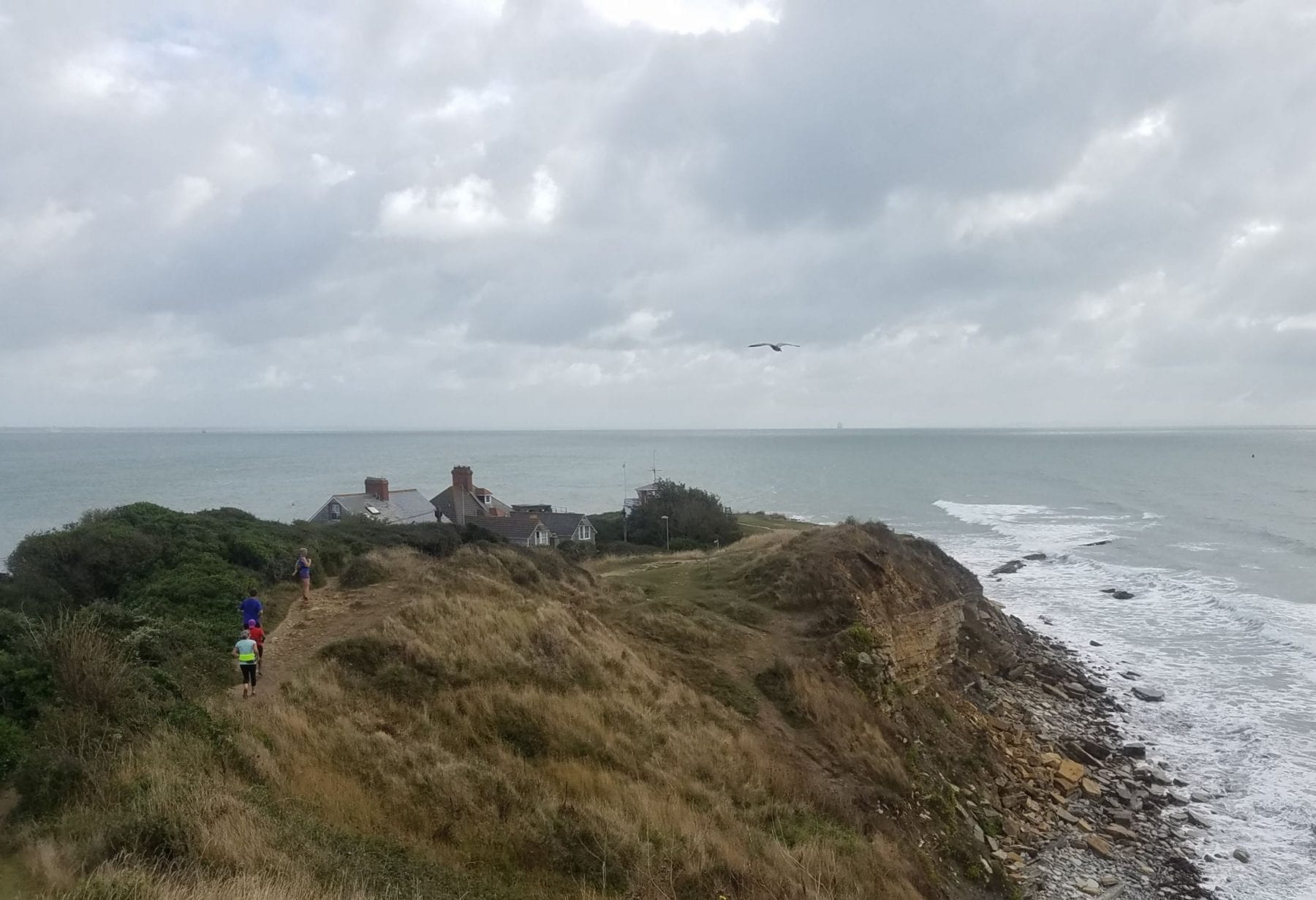 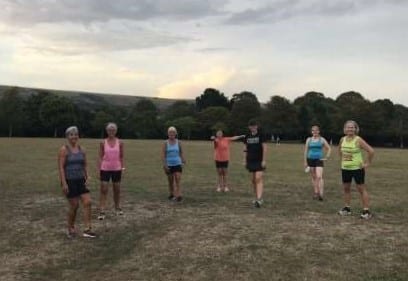 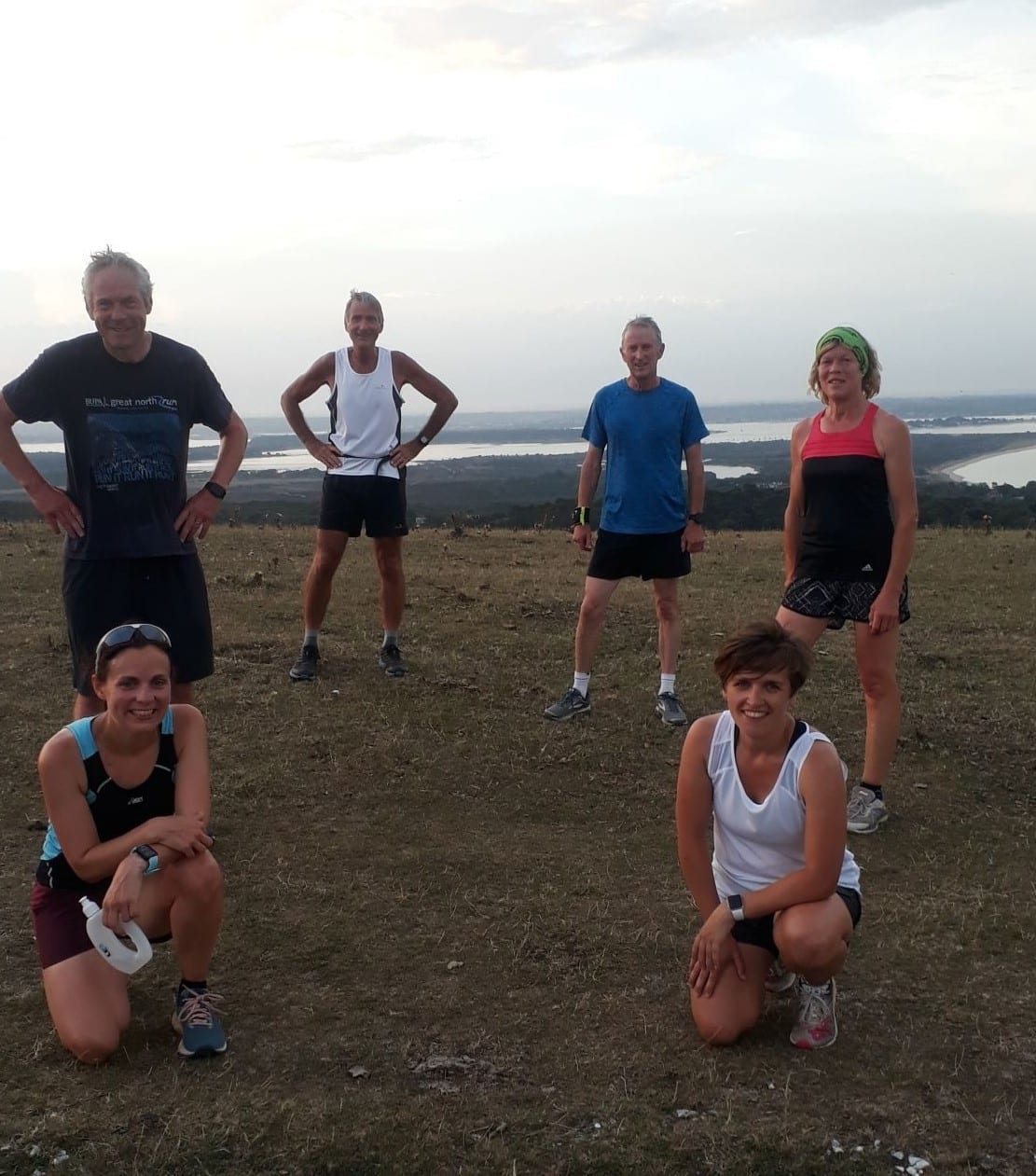 Swanage Lifeboat Week is traditionally a big part of the August holidays. Swanage Lifeboat is such an important part of life in the town and Lifeboat week an opportunity to recognise the contribution of the brave crew and raise much needed funds. Like so many other events, Lifeboat Week couldn’t happen as usual this year, but it did go virtual and included in this was the Lighthouse Loop 5k race. Runners were invited to complete the course and send in their times, with the event being extended to run until the end of the month. It is a superb and surprising tough course and it will be interesting to see how many took on the challenge and how it all went when the results are published.

On a whole different scale Purbeck Runner’s Sarah Colquhoun has been continuing with her mammoth virtual run to York and back (June News Blog). Having run the equivalent distance to York Sarah set off for London and has now completed the 237 miles. A fantastic achievement! Sarah is now on the final leg to cover the distance from London to home, a further 125 miles. We are all wishing her well on this amazing challenge.

Slowly and cautiously more races are appearing on the calendar, some like the Ooser rearranged after postponement from earlier in the year. However, it is a challenge for the race organisers to comply with the very necessary COVID-19 measures and a number of planned races for the Autumn remain cancelled, so the virtual races and personal challenges will continue while we watch to see which races are held and how the rest of the year goes.