It is early on a cool grey Sunday morning. After months of training and all the hard miles, two Purbeck Runners are stood there in their club vests with all the expectation that comes before a big event. The preceding months have seen unexpected and unprecedented events; there was disappointment with the race cancelled, hope that it might happen in some form and finally it was here. The race numbers were pinned on and the race numbers said it all…this was the big one, this was the London Marathon, but not like any London Marathon that had gone before. The global pandemic meant this would be a virtual race, so while a small band of elite runners would be doing circuits of St James Park, 36,000 other competitors would be running the race their way. So it was for our intrepid pair of Sarah Colquhoun and Joy Norman who swopped the streets of London for the lanes and hills of the Isle of Purbeck. They set off supported by friends from the Purbeck Runners and were joined by others as they ran their race. They had some truly challenging conditions, with freezing temperatures, rain and strong wind as well as those Purbeck Hills to contend with, which are not a feature of normal London Marathons! Neither are oil wells, so look out in the photographs below for the Nodding Donkey which they passed on their route! For those who could not get out to support, members were kept up to date with progress thanks to posts on the website. Finally, the finish was there in Prince Albert Gardens, complete with a finishing tape, London Marathon theme music and bubbly! What a remarkable achievement by Sarah and Joy. To complete any marathon is fantastic, but this was very special, with all that they had gone through, with what it meant and for the charities they were supporting - Sarah the Swanage Foodbank and Joy the Alzheimer’s Society. The photographs below show what a challenging day it was, but even more how much they were both clearly relishing and enjoying it!

The early morning start with Trudy and Tara 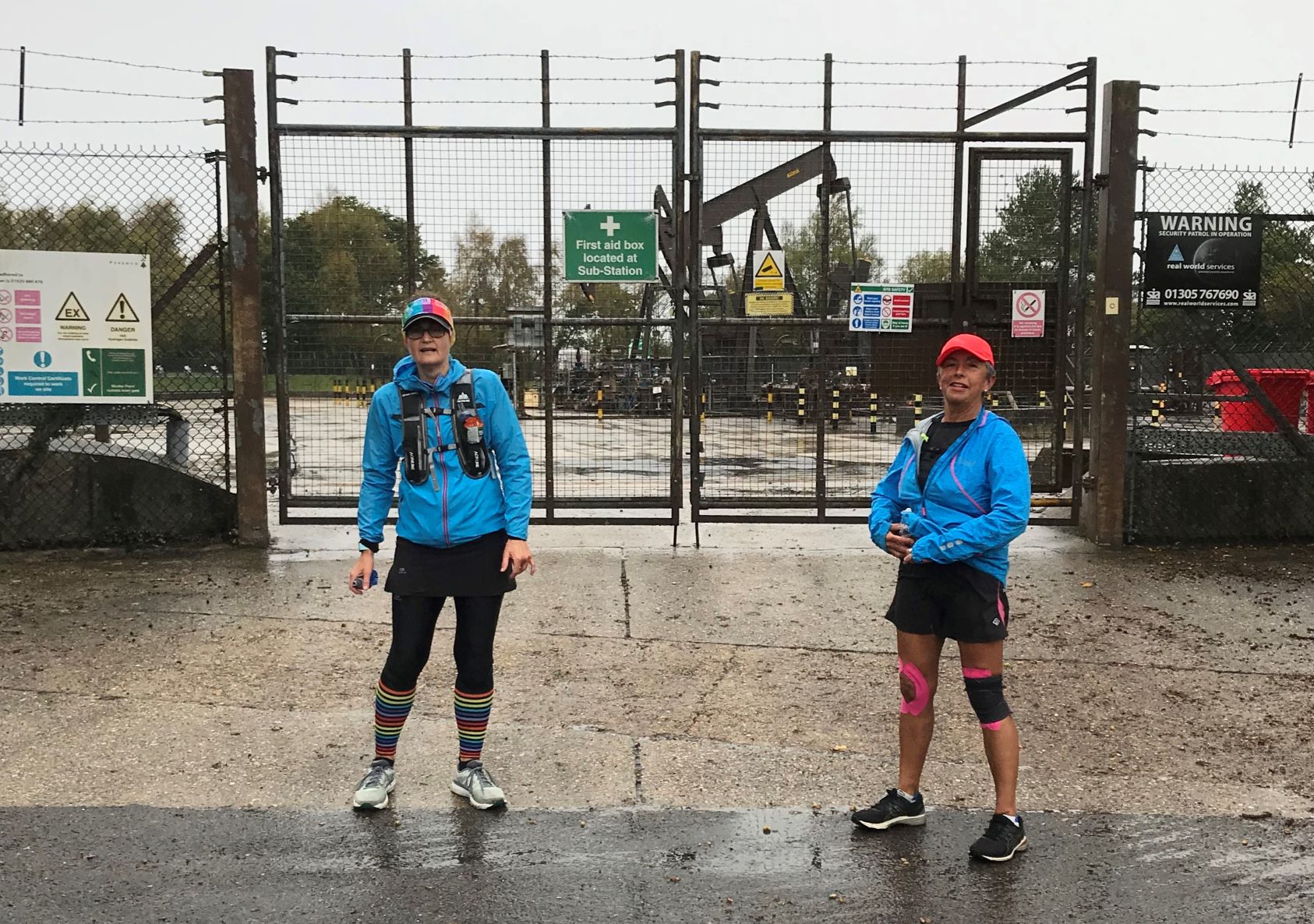 You don't normally see oil wells at a London Marathon 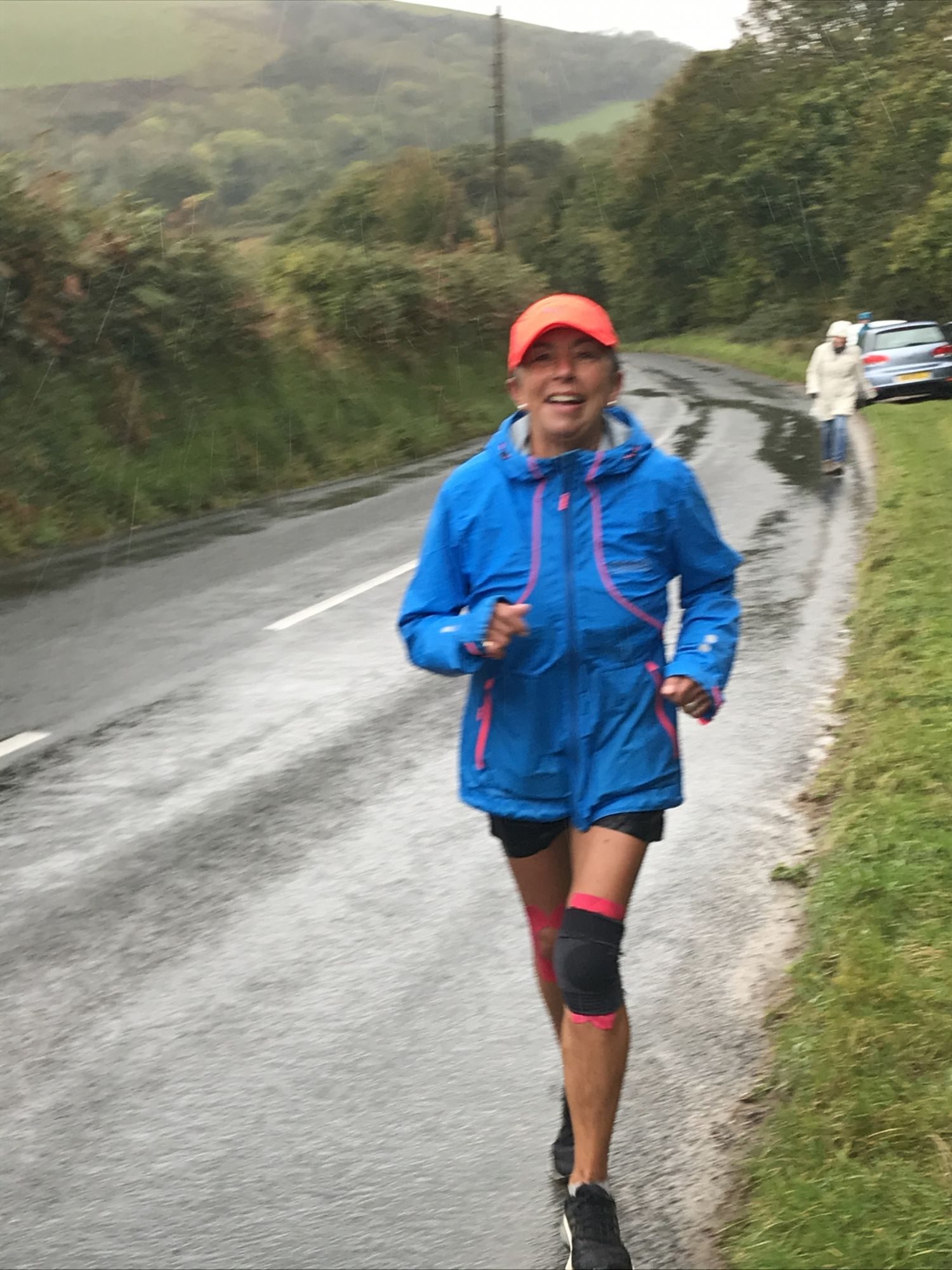 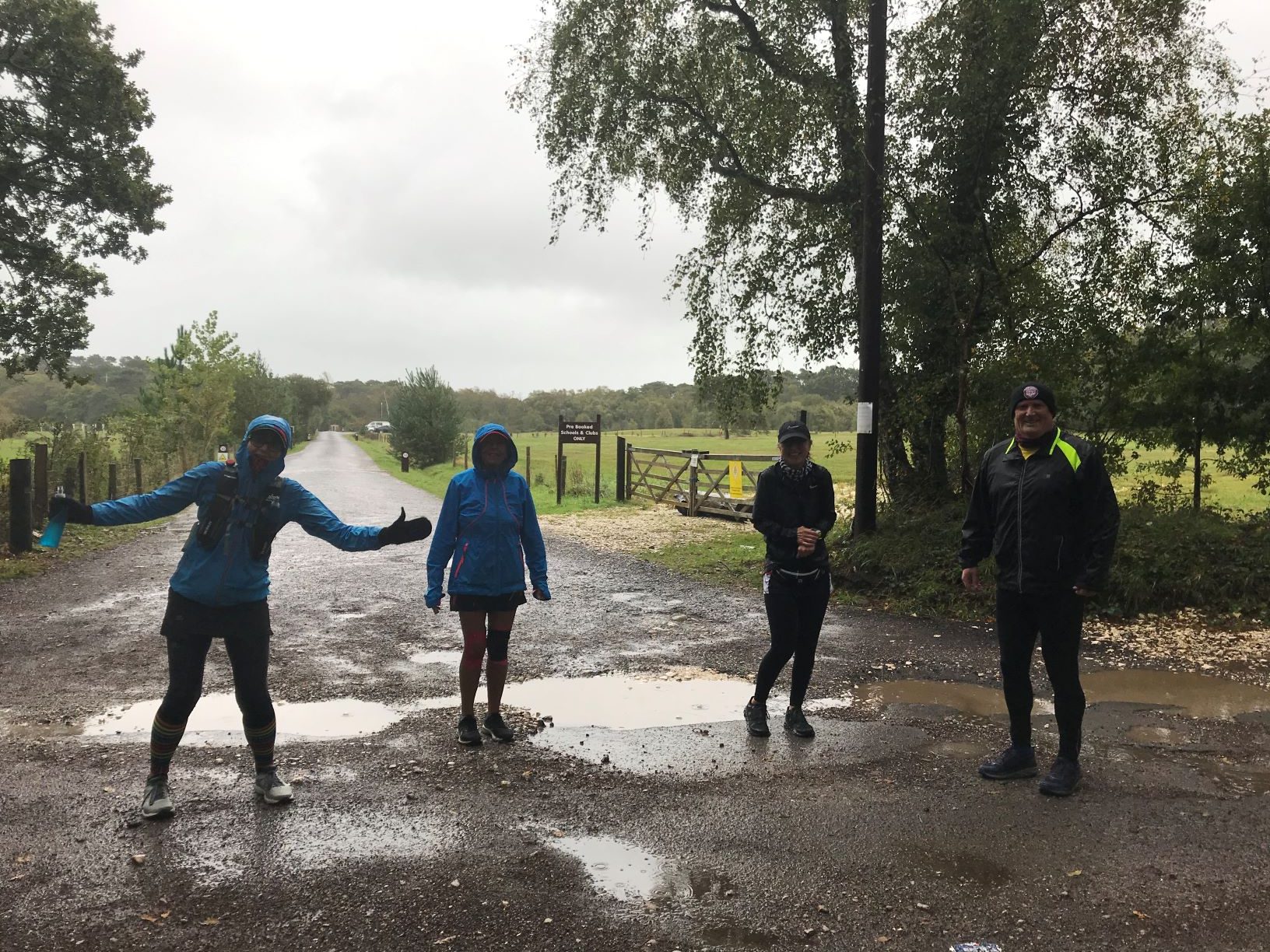 Support from Bonnie and Rab 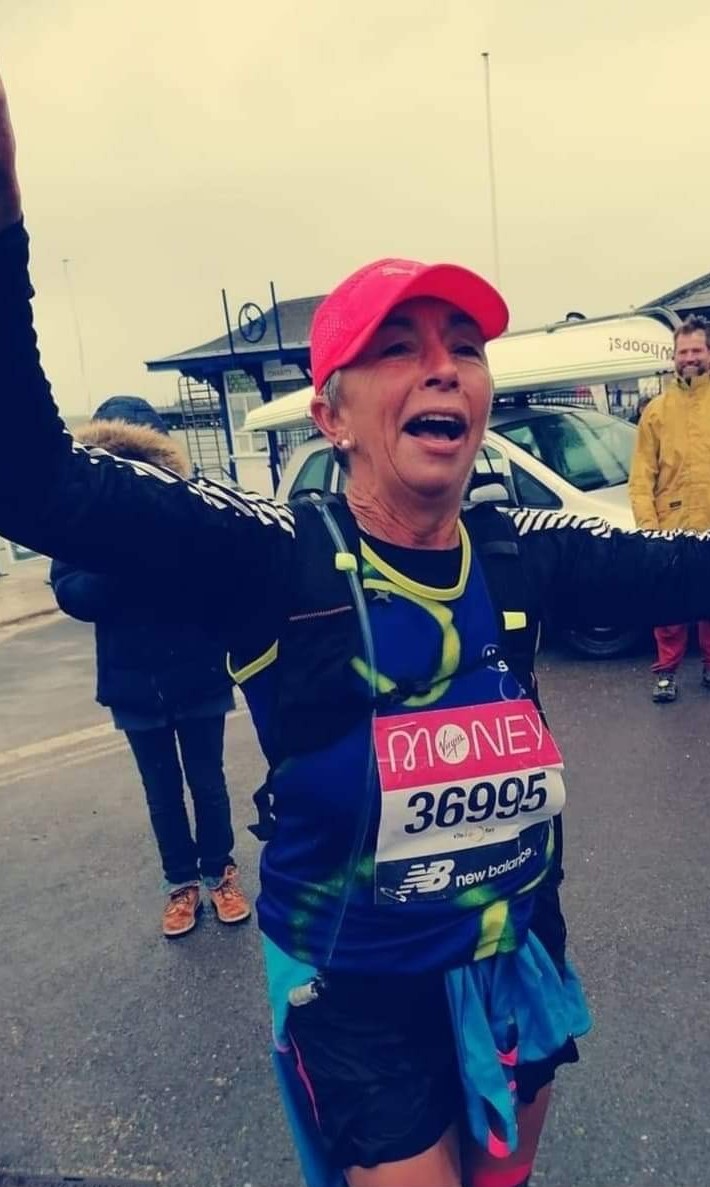 Yes! Joy at the finish! 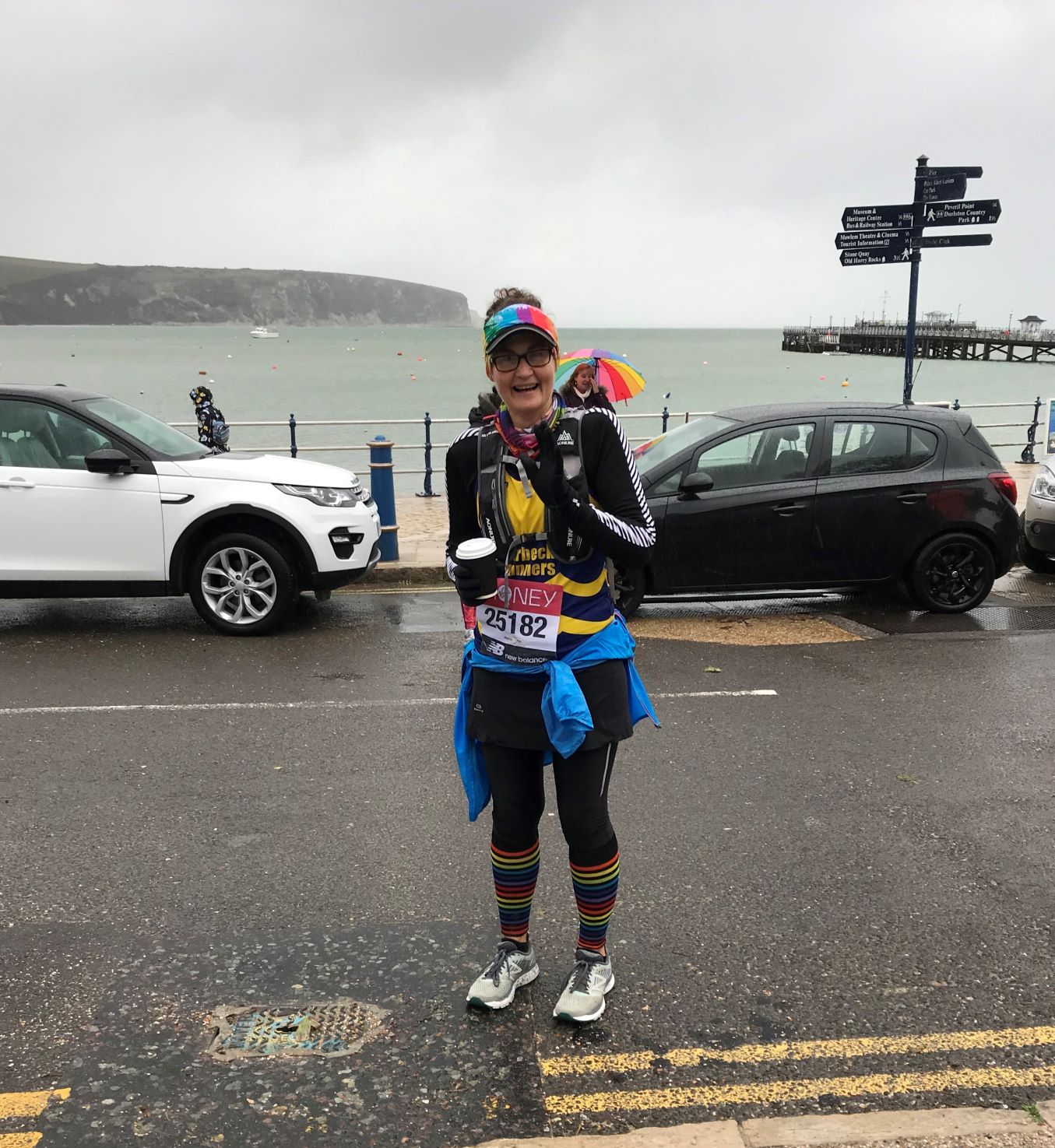 A hot drink and a big smile at the finish for Sarah!

October brought proper Autumn weather with rain, wind and cool conditions…ideal actually for lovers of the Purbeck trails and a bit of mud! The Purbeck Runners are a hardy bunch, so the weather didn’t deter members from Wednesday, Saturday or Sunday club runs. A huge thank you to our resourceful run leaders and runs co-ordinator who put together some wonderful routes and training sessions, which has not been easy with the very necessary COVID-19 restrictions. The groups have kept the photographs coming including some excellent composite pictures this month. Here is a selection: 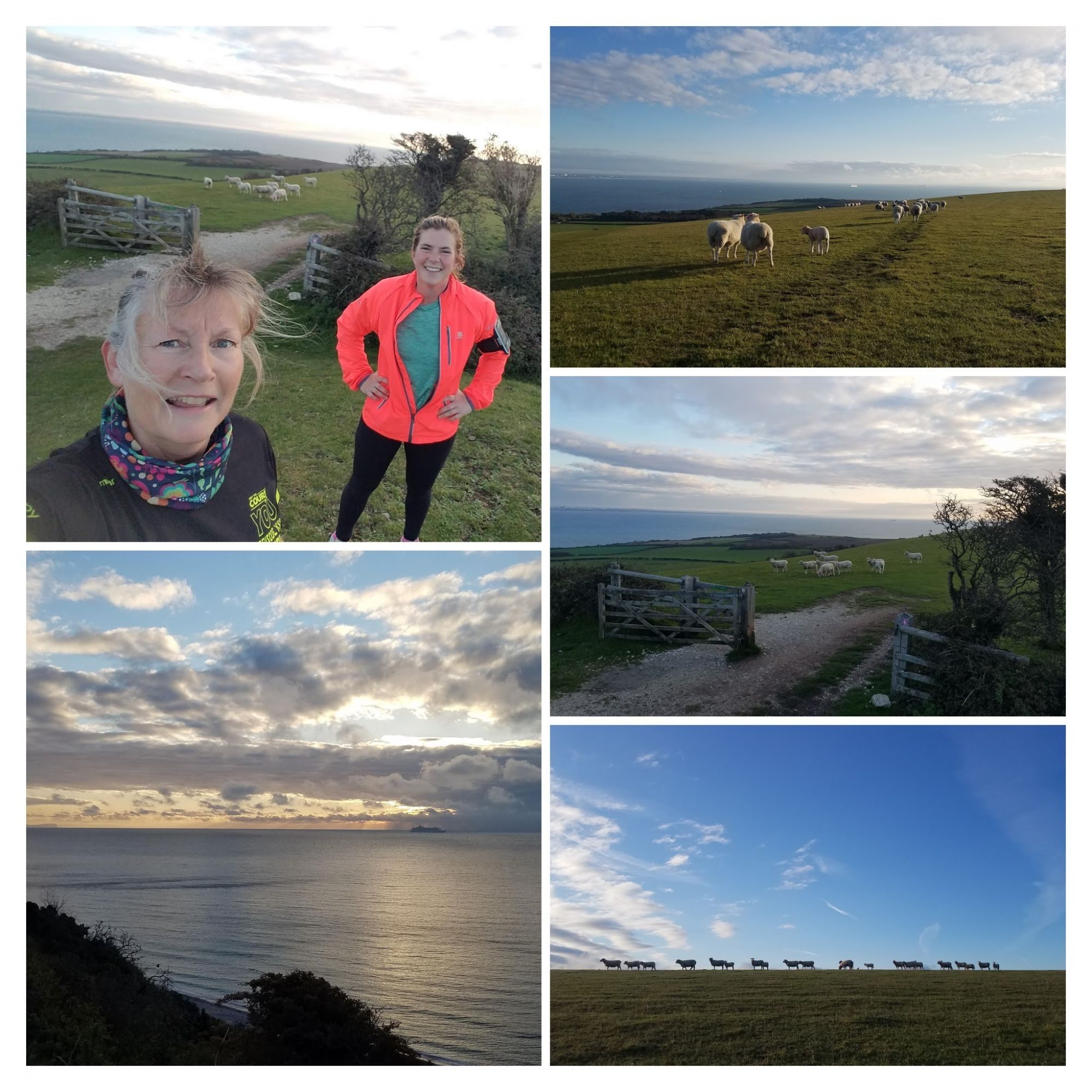 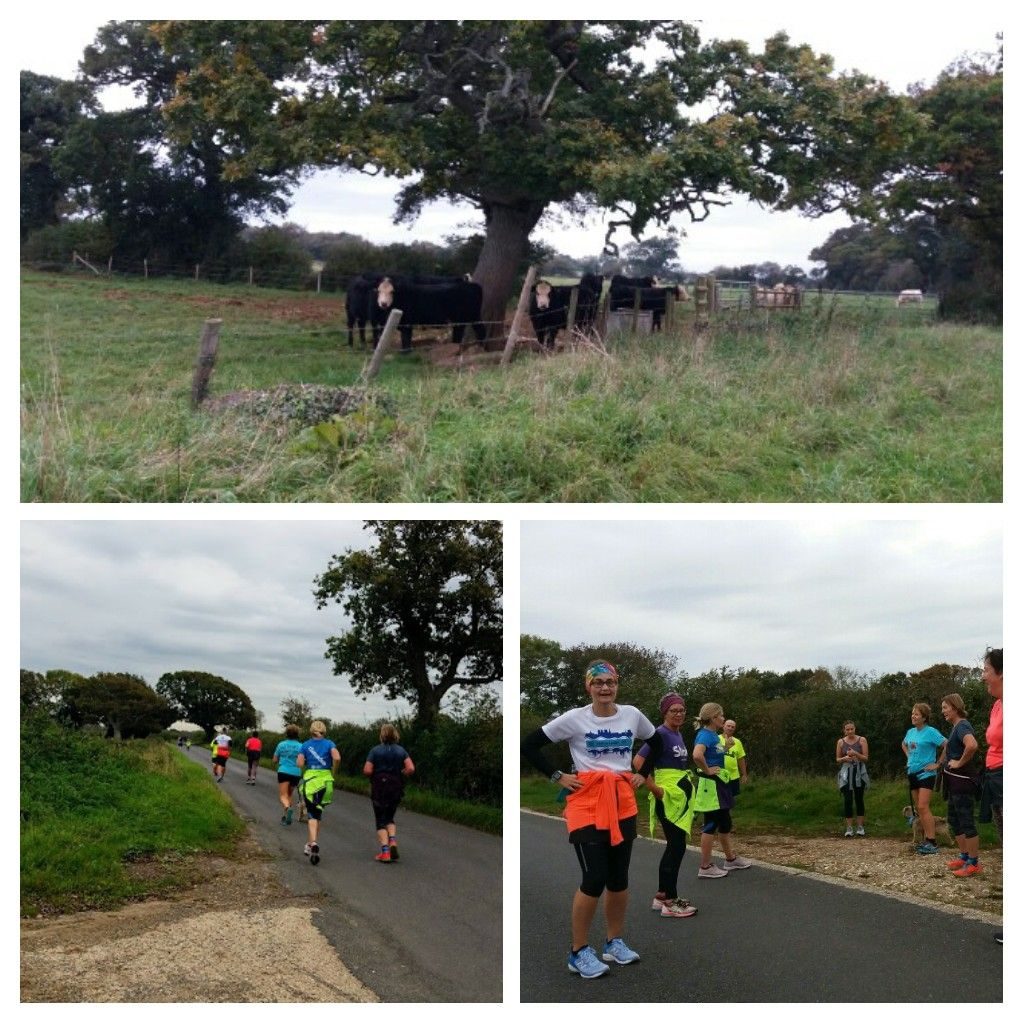 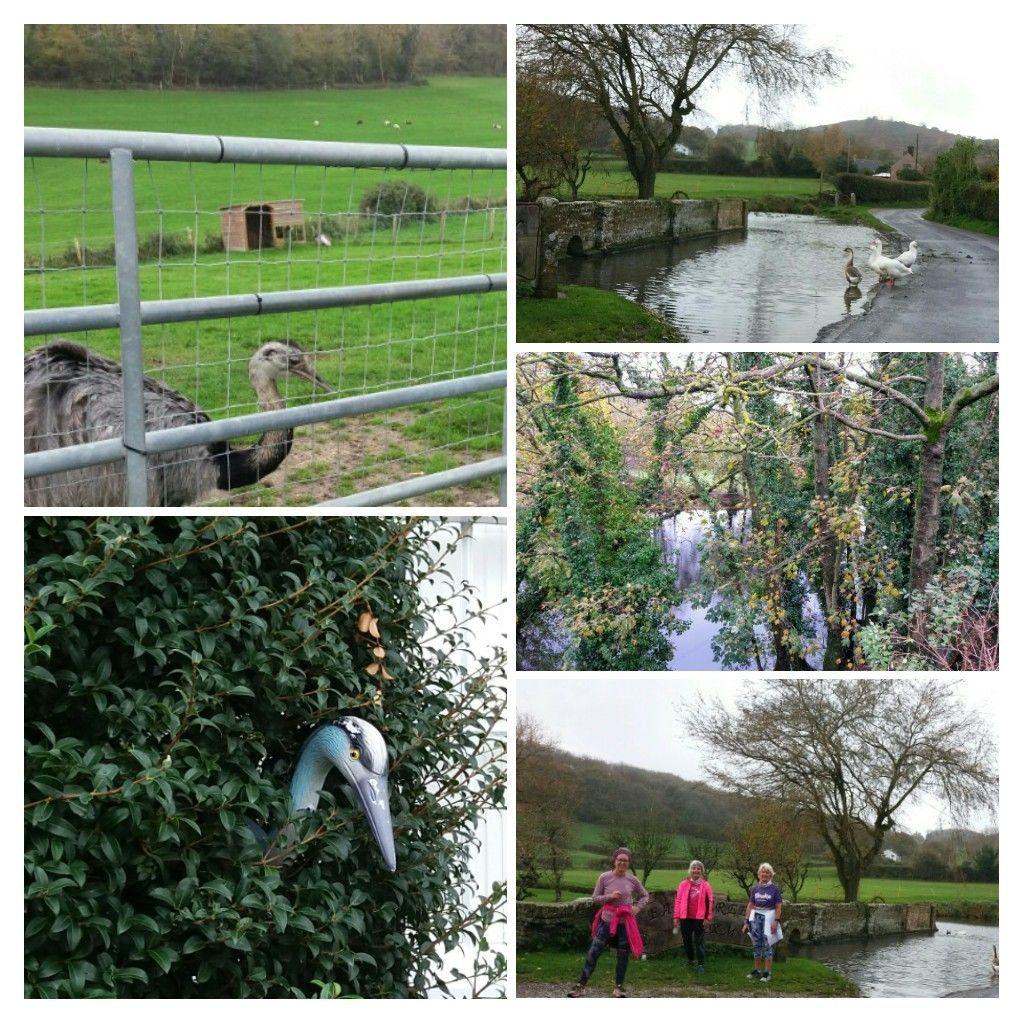 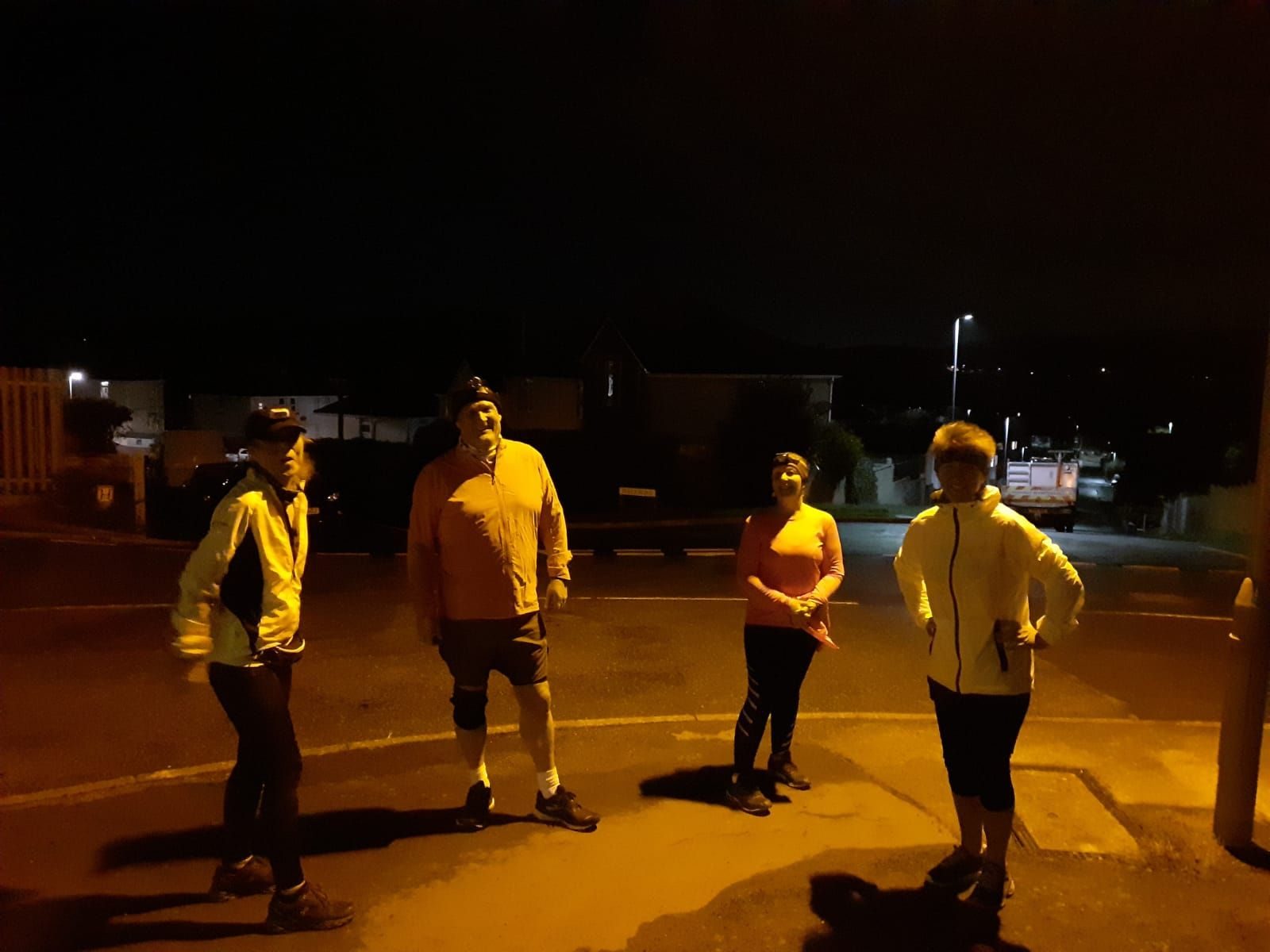 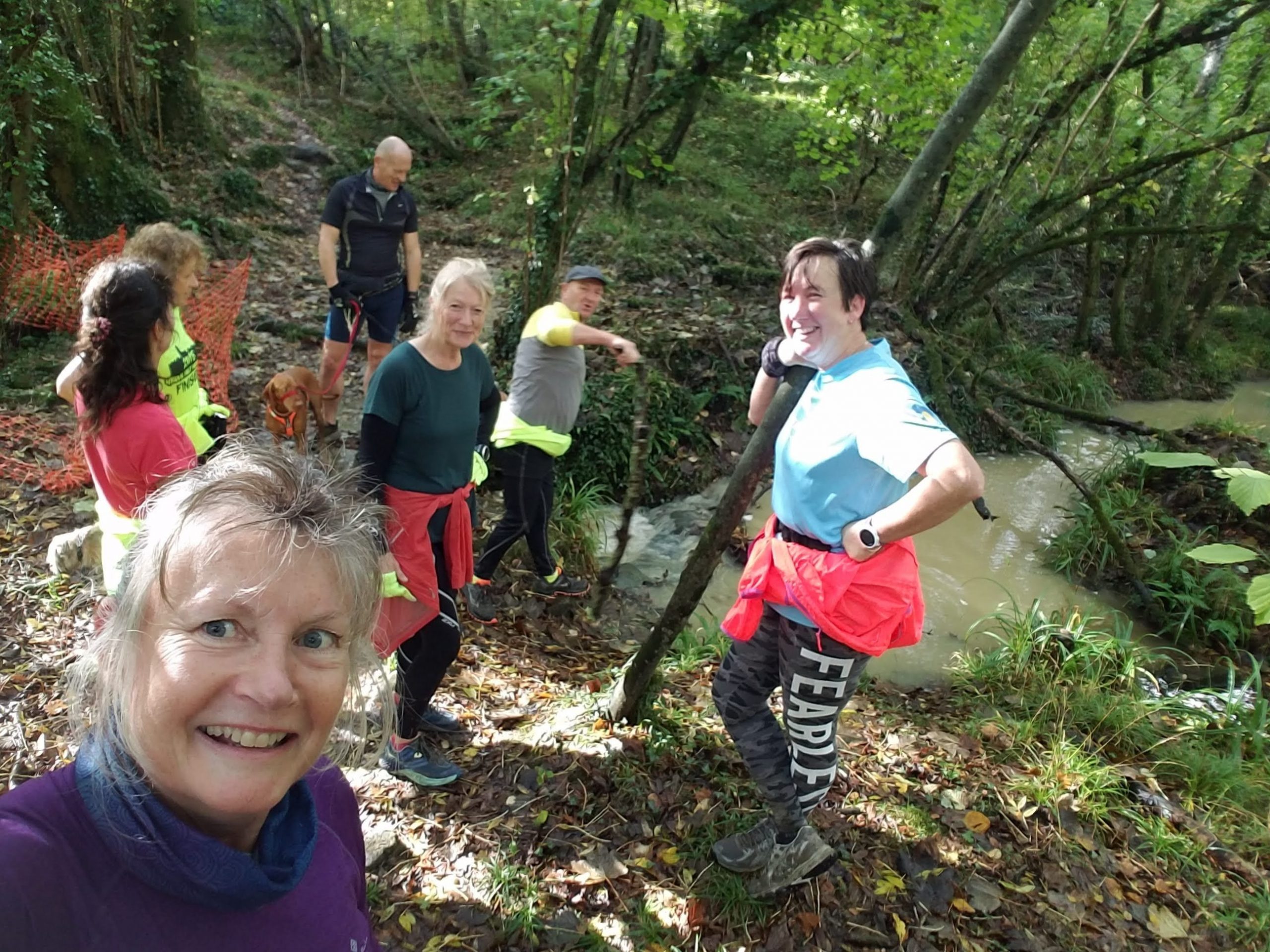 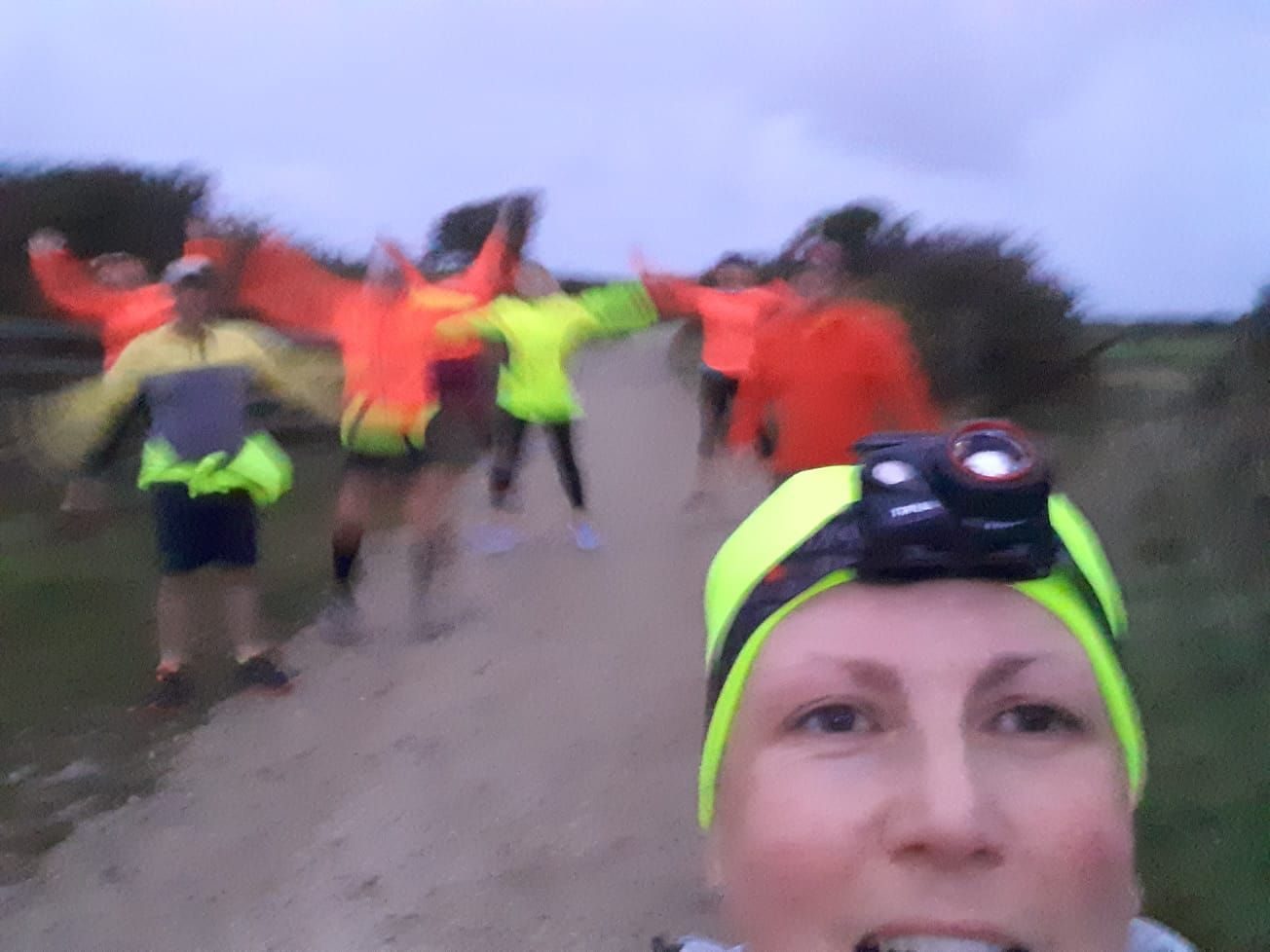 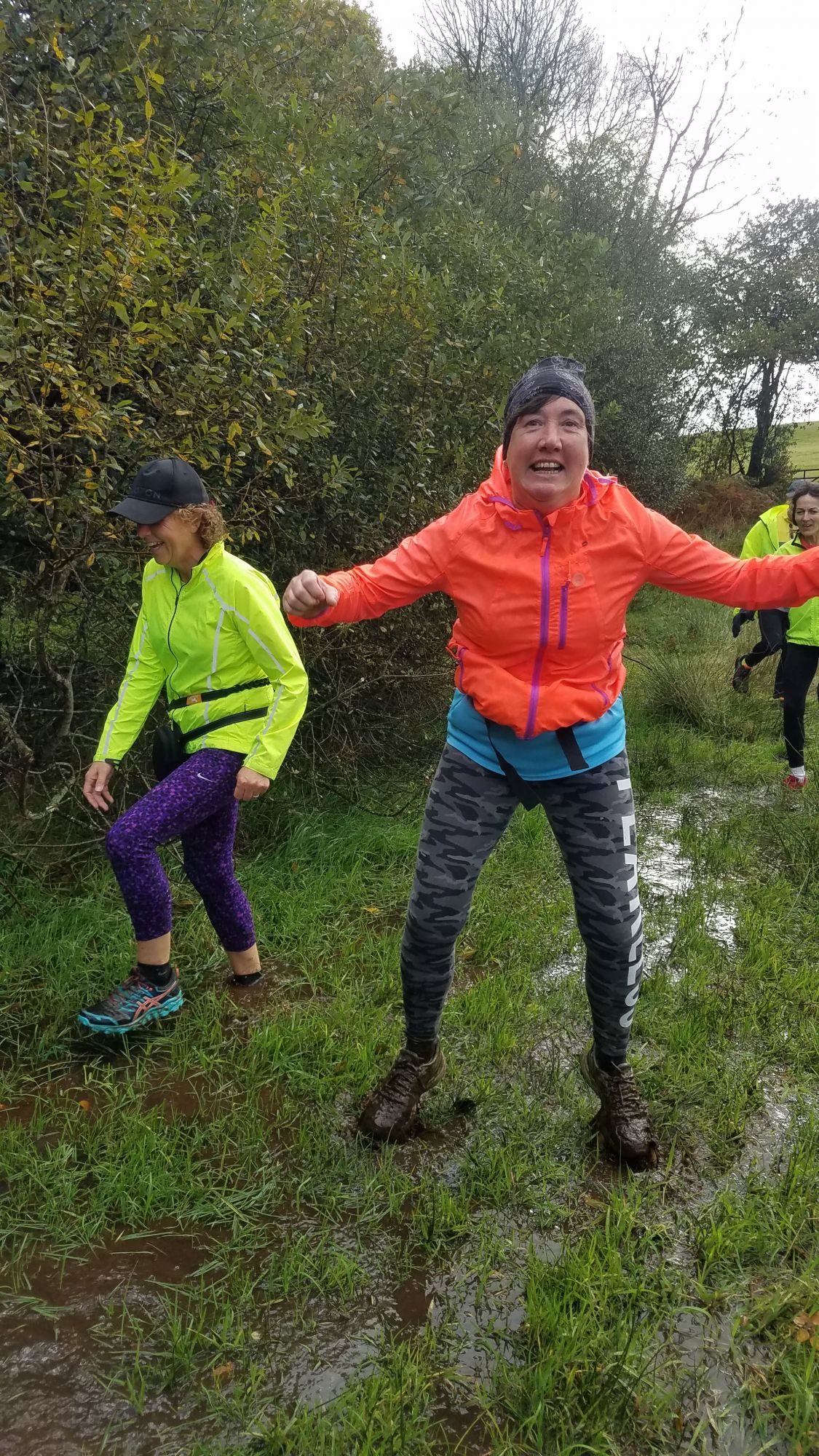 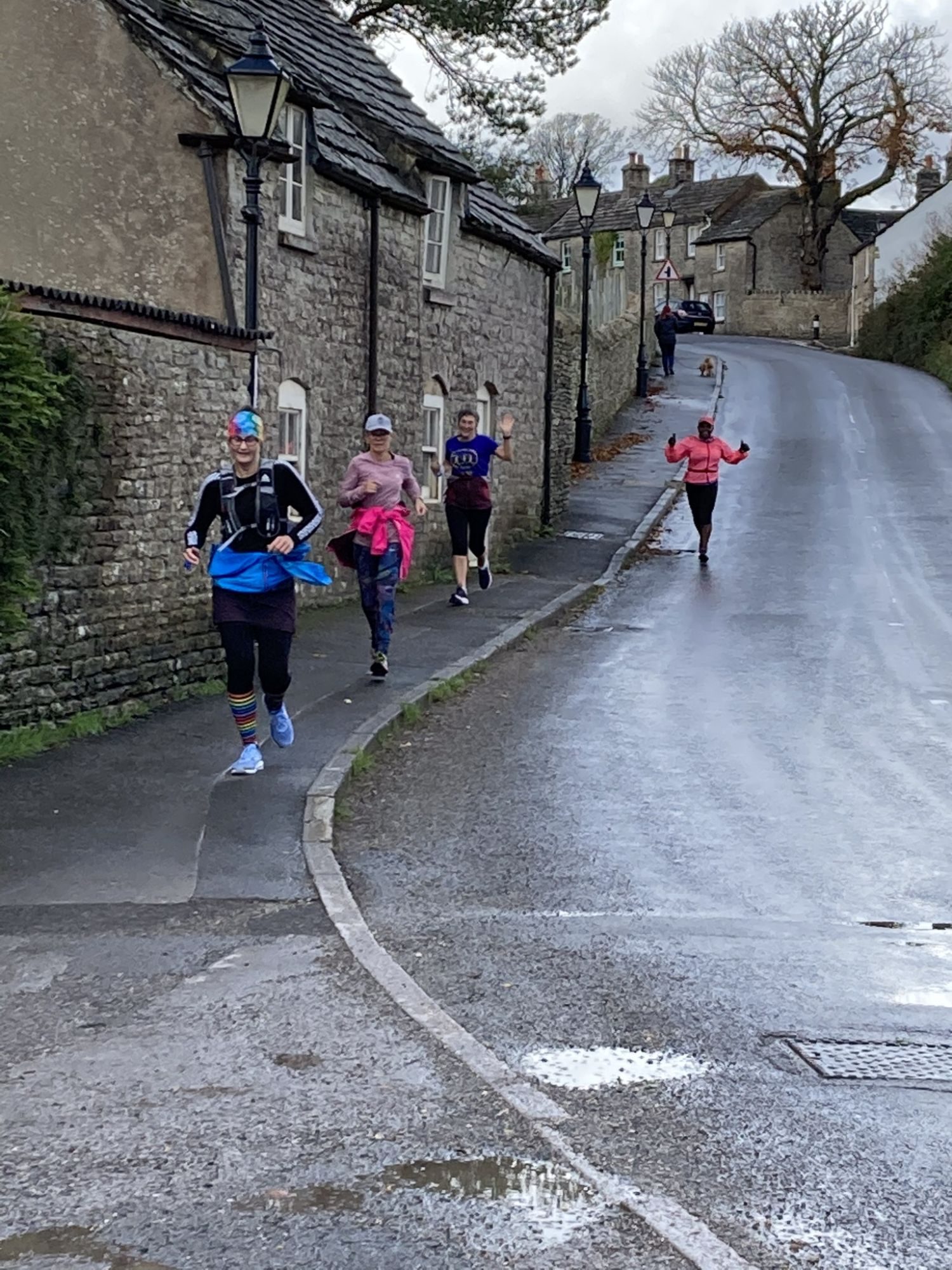 The month was not without competition and thanks to the hard work and ingenuity of the race organisers a few trail events were able to go ahead in a COVID-19 secure manner. For the club’s members it was very much a case of The Long, The Steep and The Fast with some long races, lots of hills and some super-fast times.

First up was the Maverick Adidas TERREX X & Ultra Jurassic Coast Race on Saturday 17th based at Rempstone. The X Series, like all Maverick races are really tough, it’s just that they are even more extreme! There were races over four distances ranging from a “short” to an “ultra” with the routes making the most of the varied terrain on the Isle of Purbeck and the Jurassic Coast. The races followed what is becoming the new normal for events, using individual chip timing and a host of social distancing and hygiene measures to create a COVID Secure environment to enable the event to happen safely and the Purbeck Runners were there to take on the challenge. In the so called “short” race, which was actually almost 7 miles and packing a punch with over 400 feet of ascent, Zoe Pattison put in a brilliant performance. The “Middle” distance was effectively a half marathon with a really tough 900 feet of ascent and saw Abigail Baker and Jason Clark fly round in times that would be impressive on a flat road race. The women's winner of the race, Jenny Marshall who absolutely scorched the course, is a brand new member of the Purbeck Runners…that is quite an entrance Jenny! And then there was the “Ultra” which took in just about every possible steep climb on a round which covered much of the Isle of Purbeck, notching up some 33 miles and a massive 3,200 feet of ascent! Step up the club’s Ultra specialist Paula Lawton-Archer. “It was pretty tough” Paula admitted, but it did not stop her from maintaining a cracking pace and coming home with a fantastic age category win! 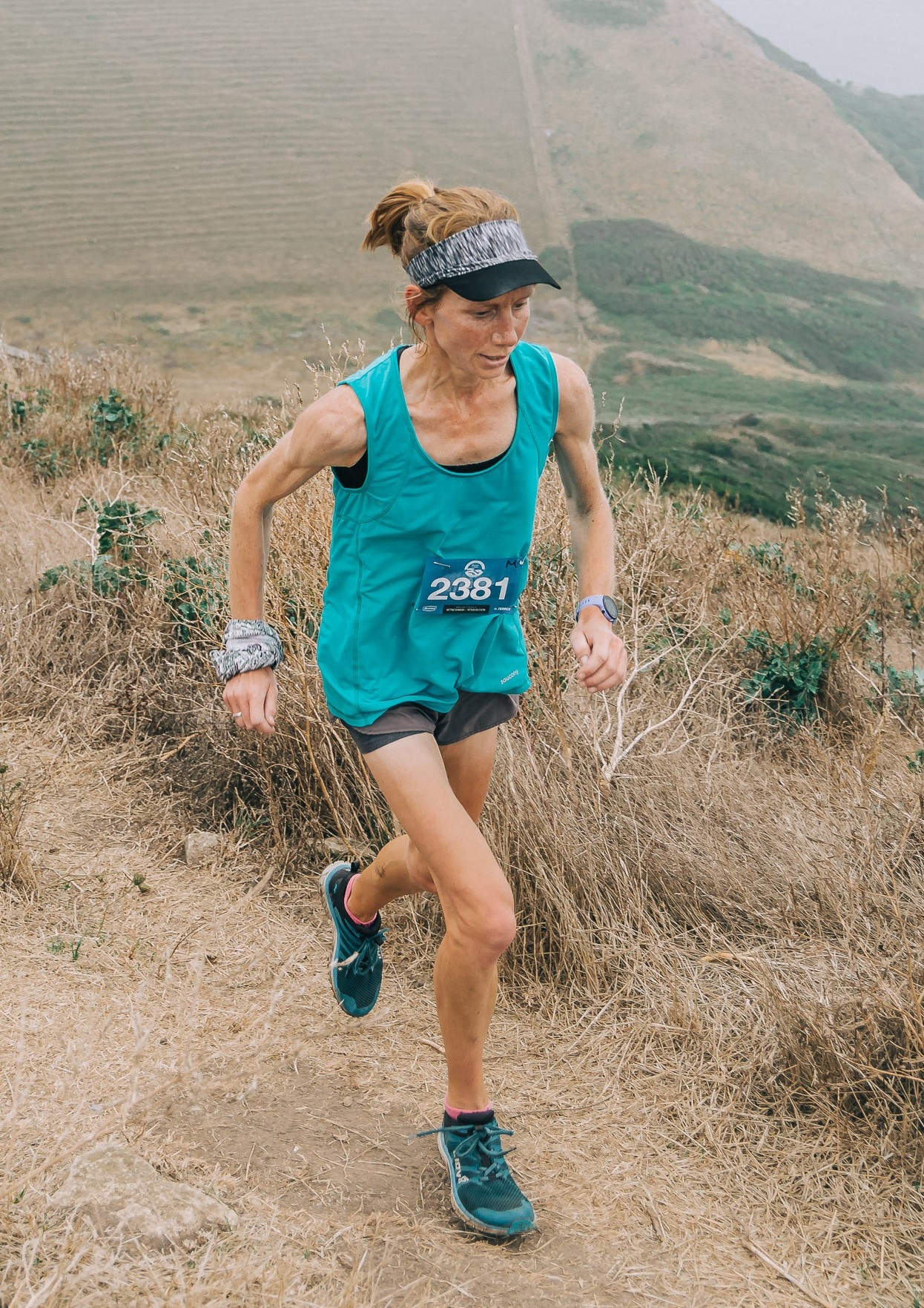 Jenny Marshall, women's winner in the Half Marathon 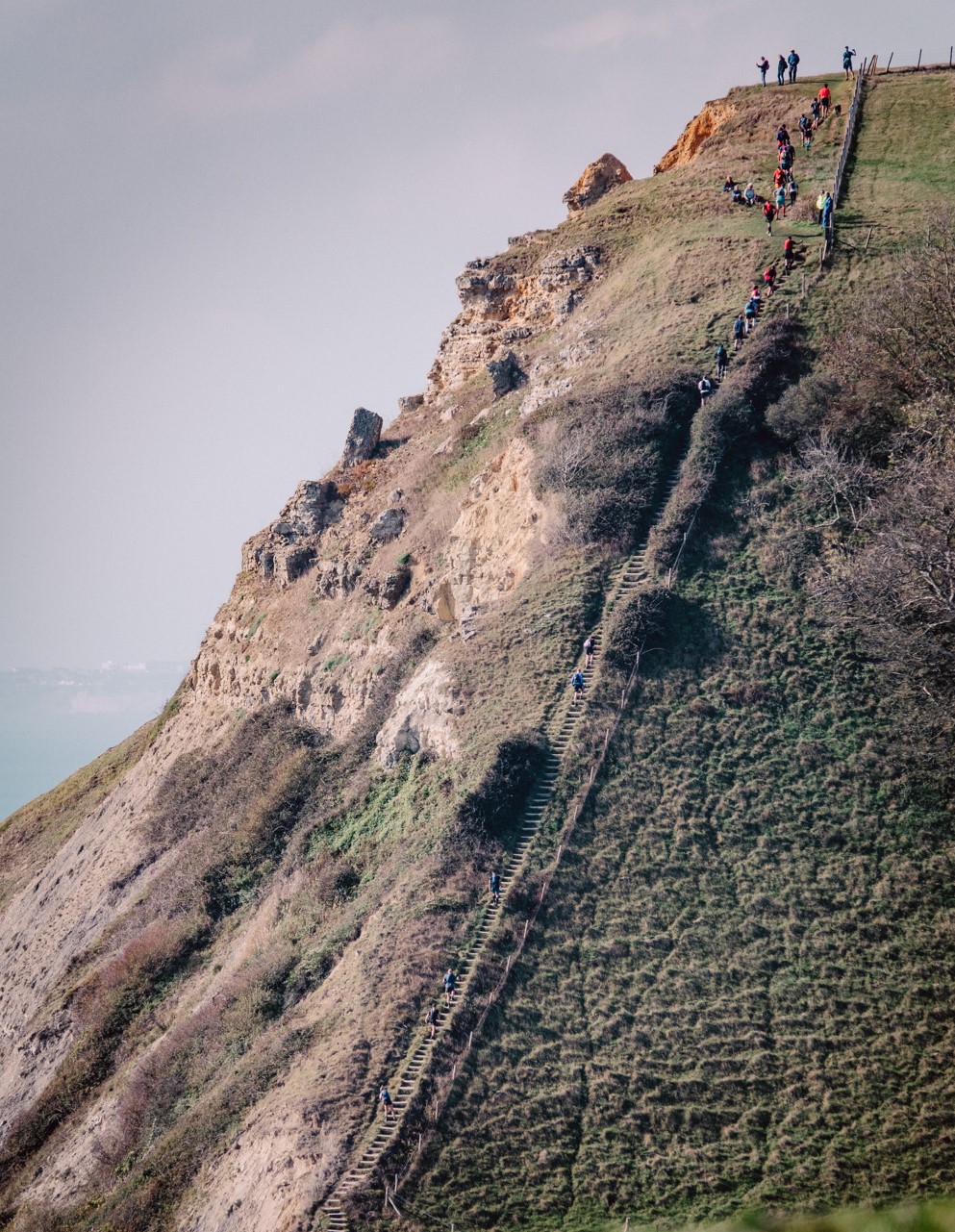 The steep climb to Houns Tout 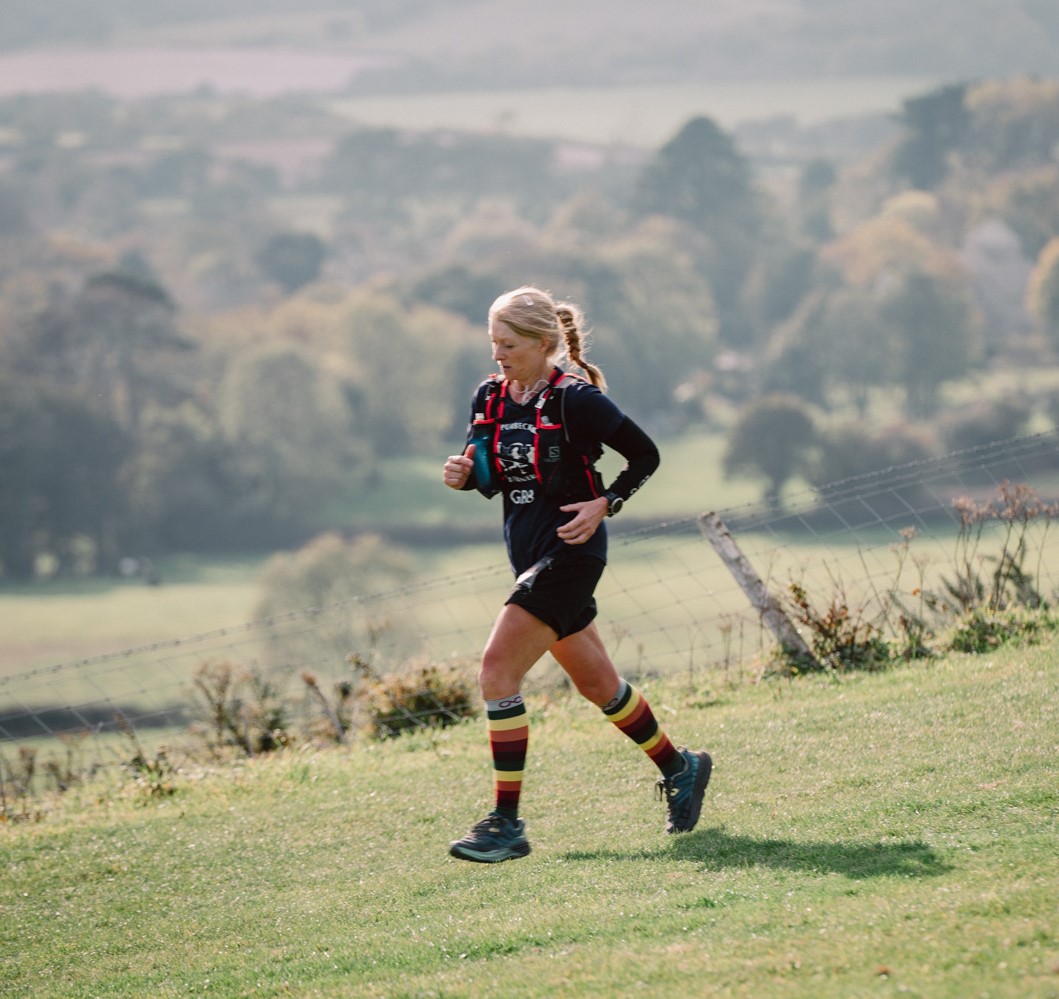 The following Saturday saw a south coast classic in the Beachy Head Marathon. The incredibly tough race starts and finishes in Eastbourne, initially heading inland over Willingdon Hill, Wentover Hill and Borstall Hill before returning along the undulating South Downs Way across the cliff tops of the Seven Sisters and Beachy Head, notching up over 4,300 feet of ascent. The event followed all the regular rules to ensure a COVID-19 secure environment. Purbeck Runner’s Liz Goldsack put in a brilliant performance finishing up in the top of the field and second in her age category.

On Sunday it was back to Dorset for a new race, The CapTEN based in Seatown and organised by Bridport Runners. It was another hilly one, the 10 mile route making the most of that part of the Jurassic Coast by taking in Thorncombe Beacon (twice) and Golden Cap, the highest point on the south coast. The race was registered as a Fell Race by the Fell Runners Association as category BM, which on their classification means intermediate severity and medium distance. Martin Grimsdale and I were there representing the Purbeck Runners, neither being able to resit the idea of a Dorset Fell Race, especially with the majority of the fell racing calendar cancelled this year. It was another socially distanced time trial event, extremely well organised and wonderfully low key in the true spirit of fell races. Martin summed up the race in his post on the website “2,280 feet of climbing over 10 muddy and slippery miles. Great route, but very hard work. Has the added advantage of finishing at the Anchor pub on the beach.” Martin put in an amazing effort over such a tough course and from the smile on his face at the top of his second ascent of Thorncombe Beacon he was relishing it. The beer at the end was well deserved! 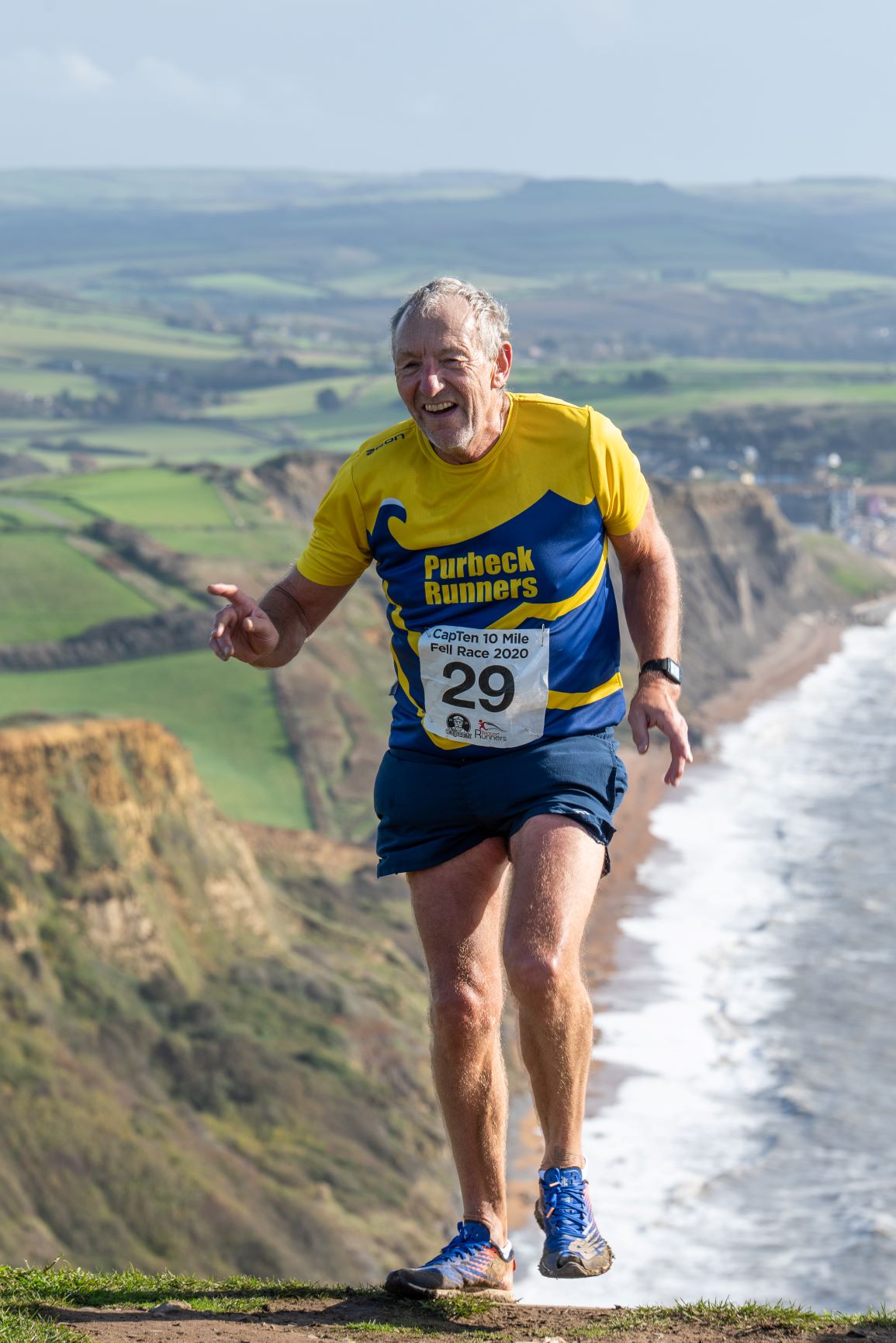 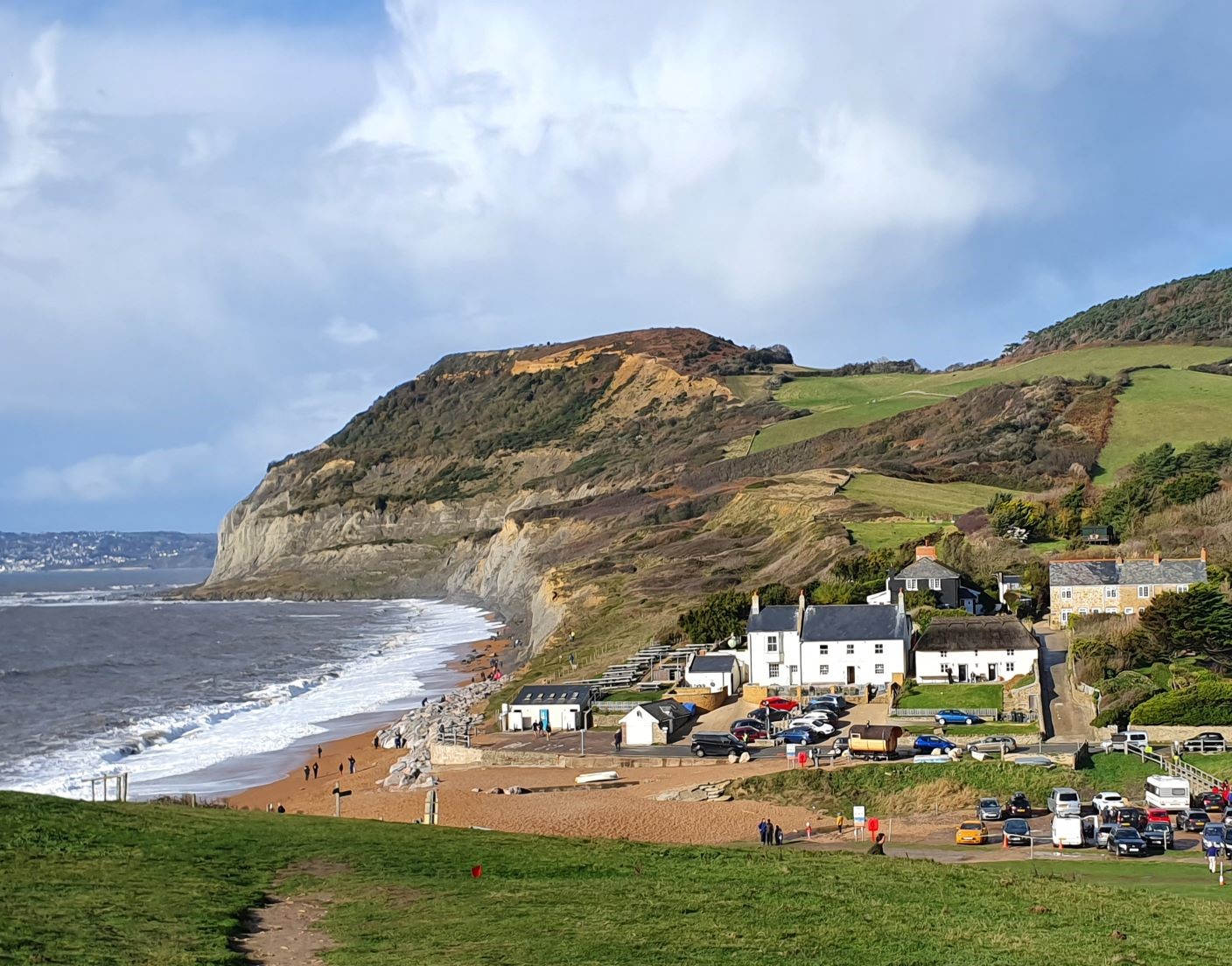 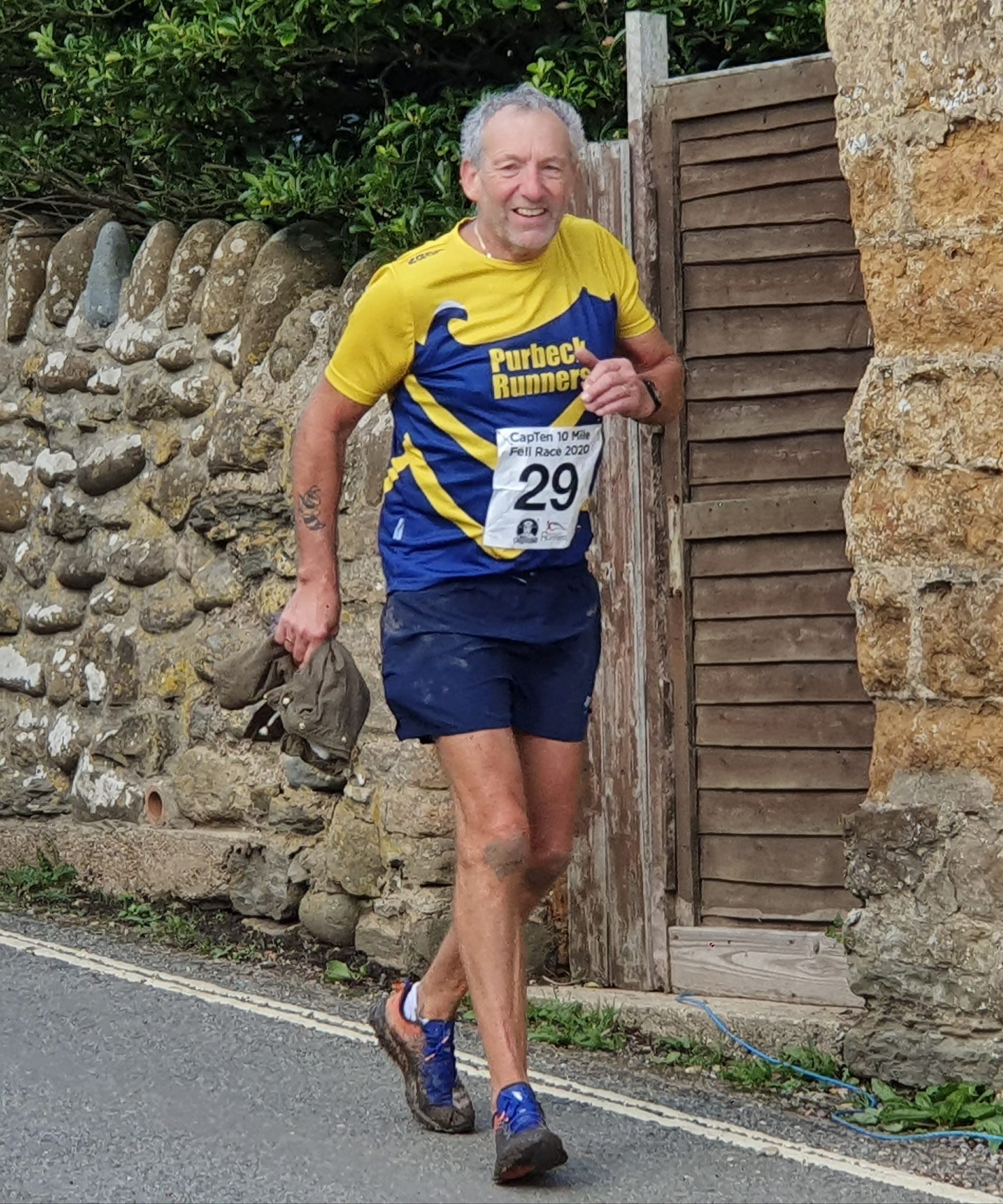 Meanwhile, Ross Wayne was having a busy time. On the 25th he headed over to the New Forest for the New Forest Rattler 5k. The race was a mix of trail and country roads and Ross excelled, flying round to a fantastic win! In Ross’s own words he was “over the moon” to have achieved his first win since racing restarted. The following weekend and Ross was in action again, this time doing a Halloween double race. In the morning he was ripping up the sand at the Bournemouth Beach Race 5k which took place in horrendous weather. In the afternoon he headed over to Winterborne Kingston for the Halloween Farm Run 5k to complete his excellent double. 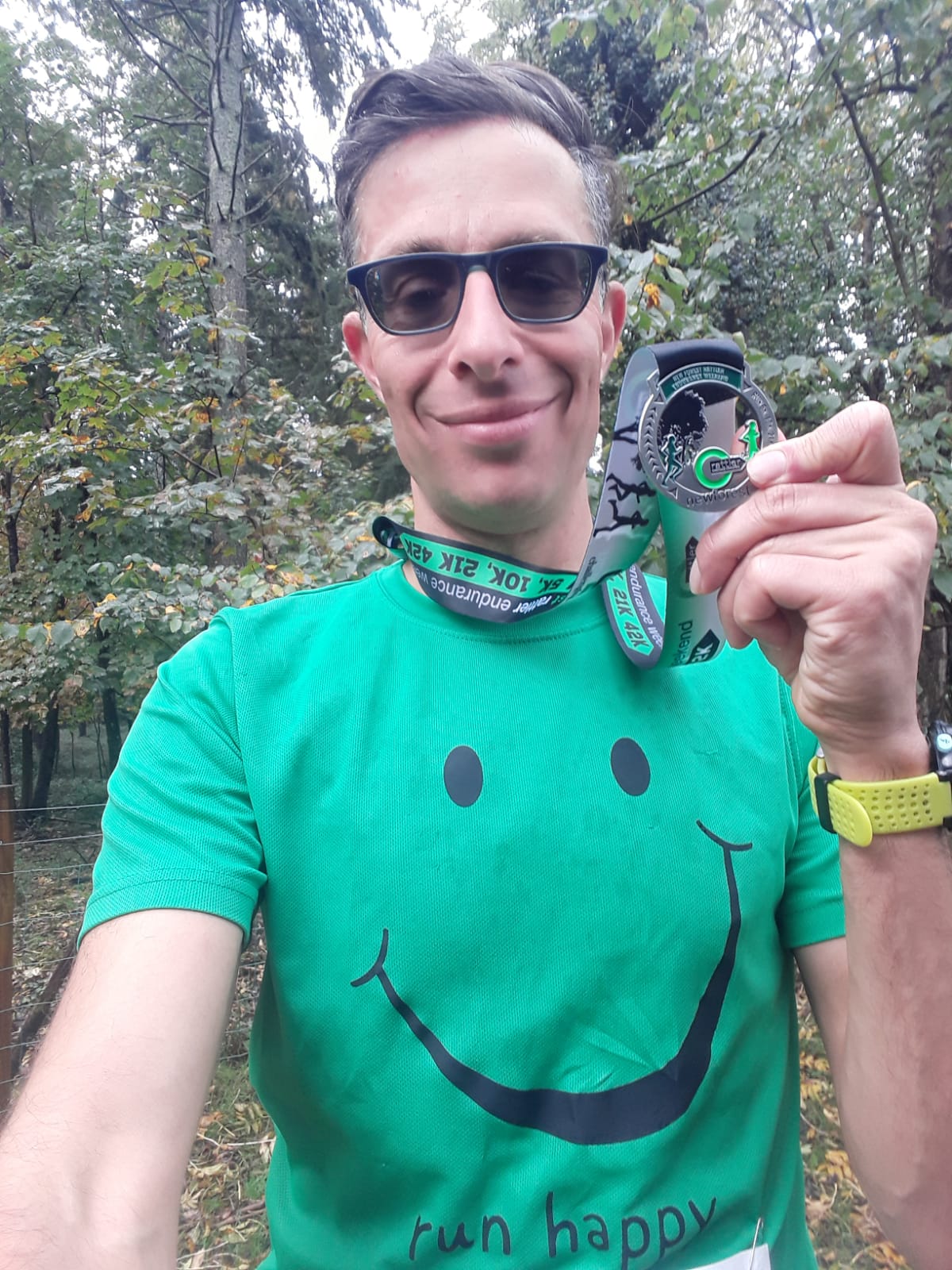 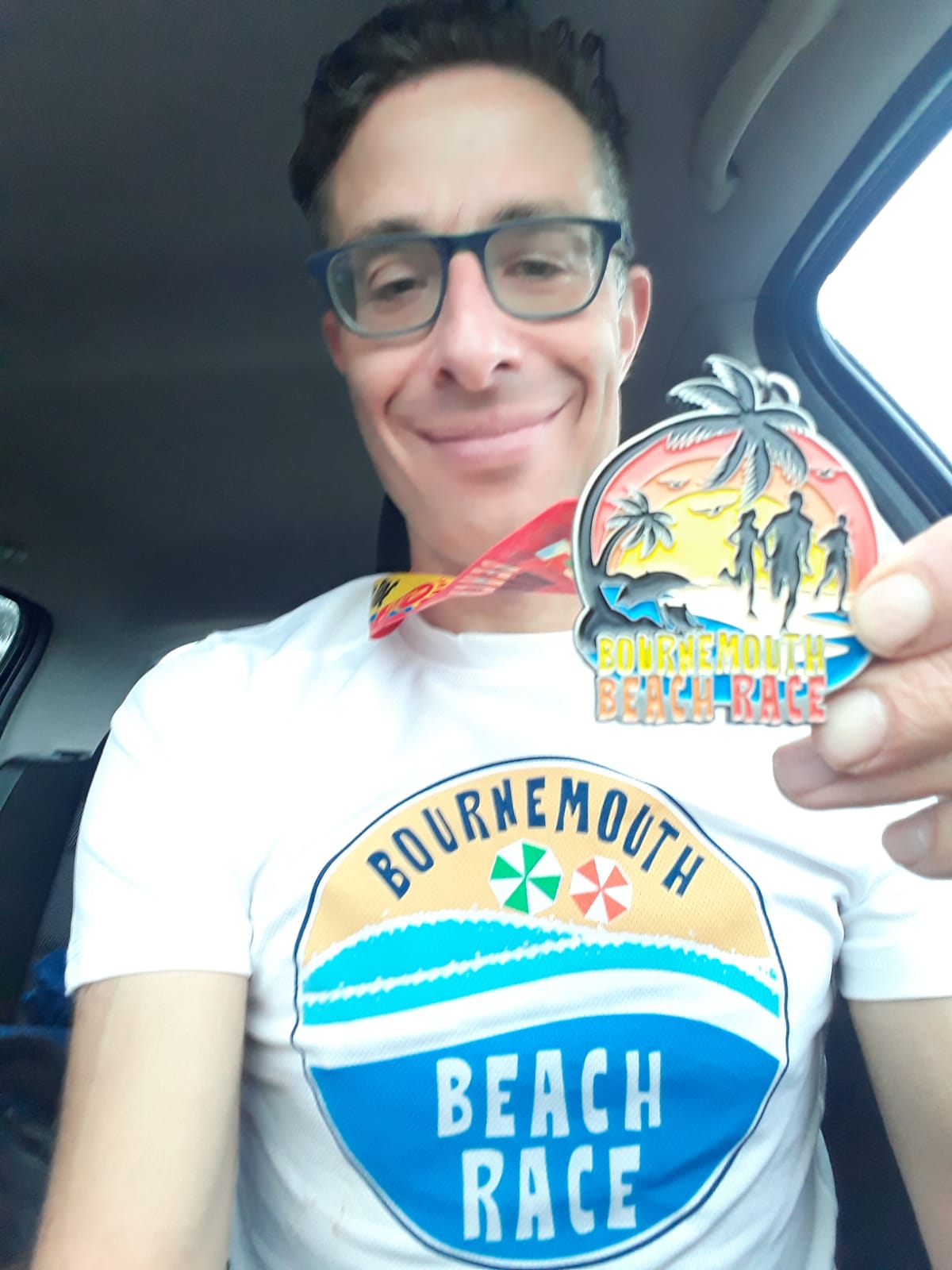 Ross at the Bournemouth Beach Race 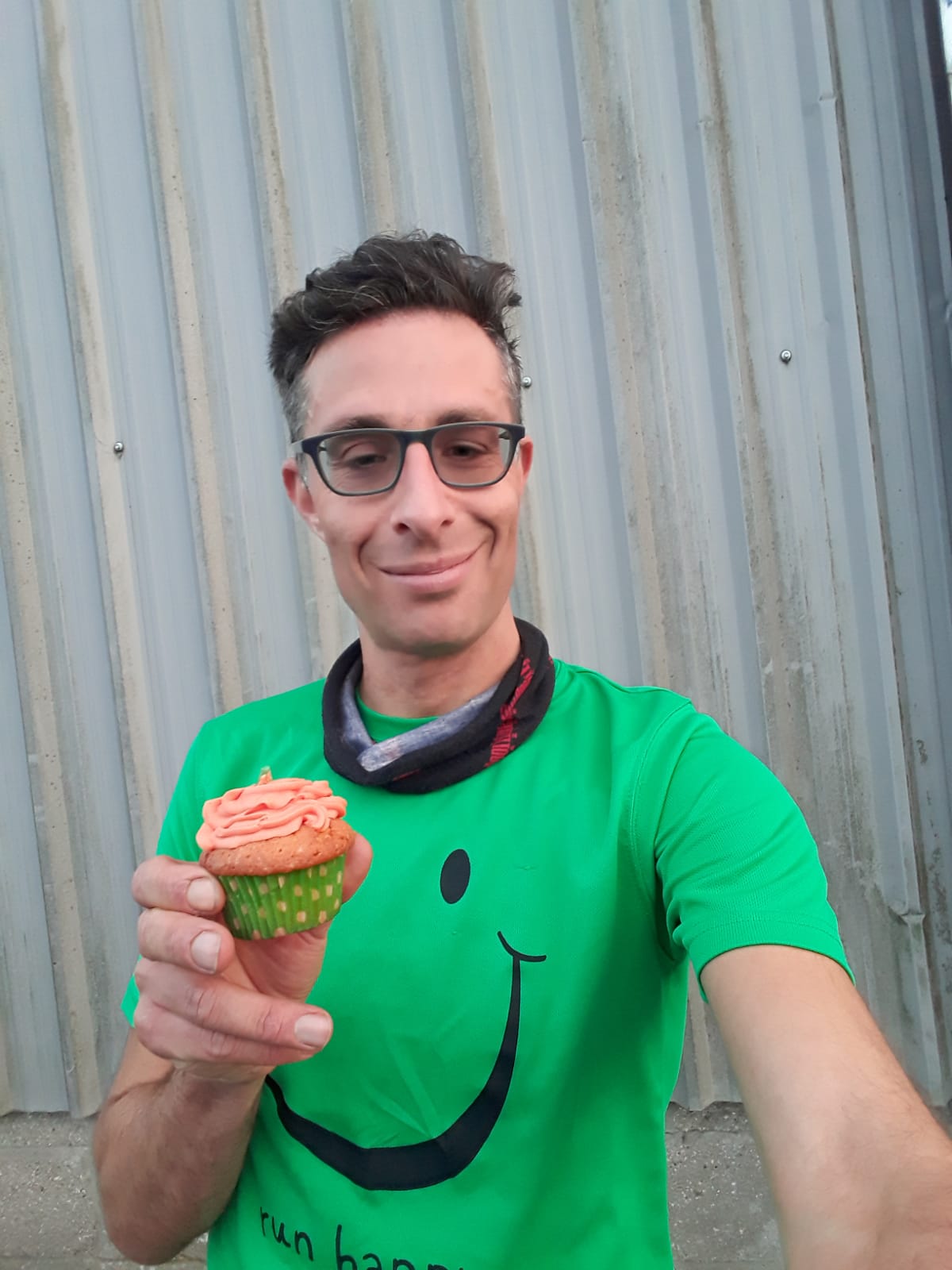 And Ross that afternoon at the Halloween Farm Run

As we came to the end of October we looked back over three months when things were improving and optimistic and we were able to meet for club runs and some limited races under strict rules. Unfortunately, as we entered November the news was not good. COVID-19 was spreading ever more rapidly and the Government announced a one month national lockdown. In line with all the necessary measures coming into force on 5th November are restrictions on grass roots sports which mean that club activities will completely cease from that time.  We must do all we can to fight the virus to save lives, livelihoods and our way of life and hope that these measures will help turn the tide. Whilst we can’t run as a club, the importance of exercise for physical and mental health has been recognised, so people are encouraged to take daily exercise outdoors, such as running and under the rules this can be done with one other person from another household with appropriate social distancing. As during the first lockdown I am sure that everyone will be out doing their own runs and training, taking on interesting personal and virtual challenges. The Purbeck Runners will do all that it can to keep its members in touch while we look forward to when it is safe for us all to meet up again. 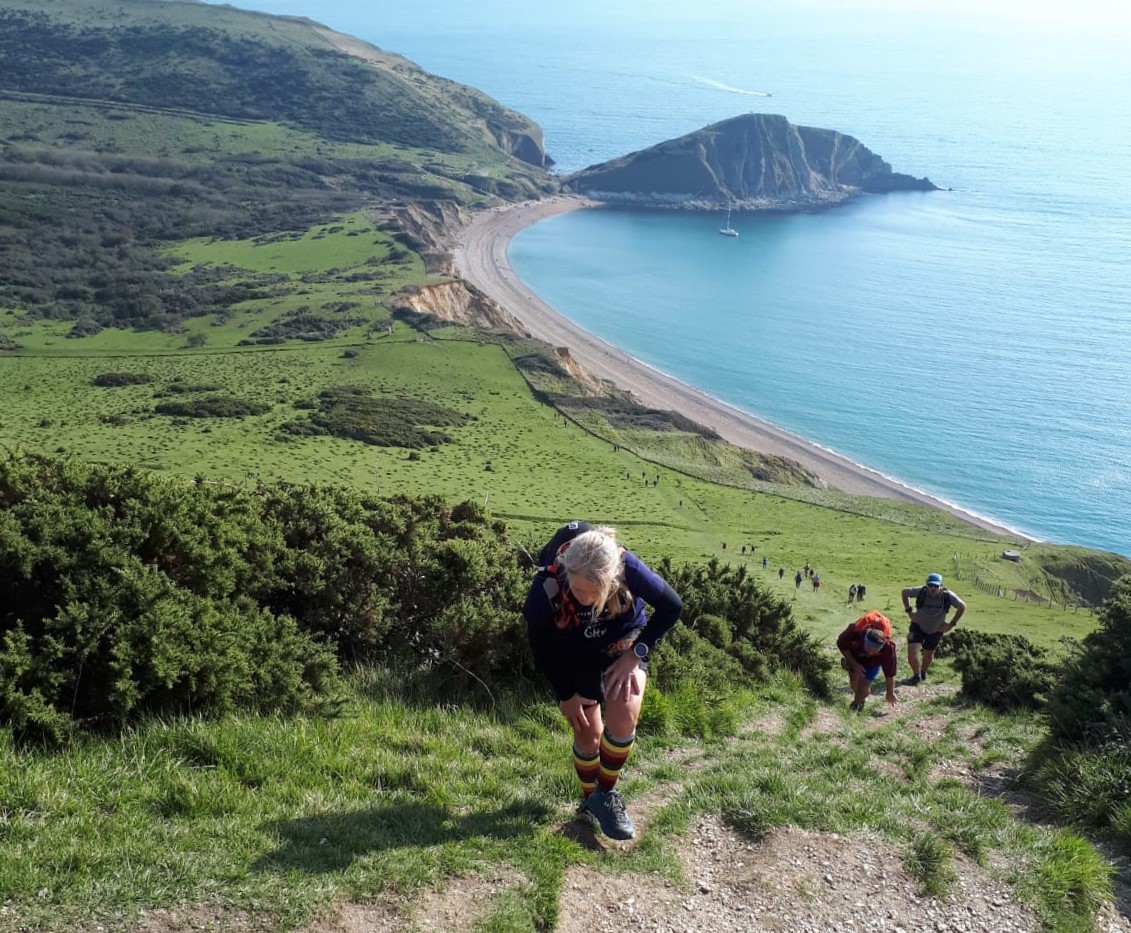